A weekend of learning by doing and sharing

Last weekend was one for the books! It was an all around pleasant weekend, with some hick ups, because some vitally important things were taught and learned, but most of all because we spend a lot of quality time together as a family. Unfortunately out youngest daughter spend the entire weekend cooped up in her room. She really is struggling with early teens female issues and is quite unwell because of that.

However it was actually she who had initiated the weekend! She had suggested we had our first seasonal movie night together. It is now sufficiently dark earlier in the evenig, which makes for cosier movie watching. So we did. We watched a movie with the 5 of us, something that really is qute hard to achieve, since each has their own very special preferences!

She also requested that we'd do a real breakfast together on saturday morning with made up table, small breads, toast, coffee.... the works. And again all joined in! No muttering about sleeping long or getting up "that early in the weekend"..... 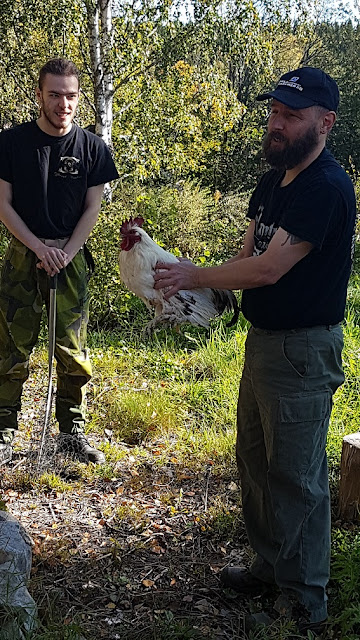 My oldest 2 were with me slaughtering our cockerels. My son passed a milestone and killed them both, a first for him that did not leave him untouched. Actually my daughter should have done one, but because of emotional instability due to certain female issues, she declined. There's wisdom there! 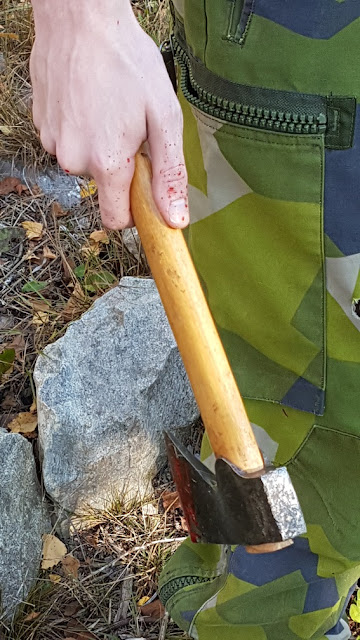 the distance while plucking the cocks certainly gave the whole thing a different ambience and I jokingly said that the time might come, where we would get used to that. Or was I...??

We ended up leaving the cockerels to the fox and other critters. For one there was very little meat on them, hardly enough to feed our family. It would take both of plus side dishes. Another reason was emotional fatigue. We all agreed that killing an animal is emotionally draining, especially when done for the first time, hands on. Pulling the trigger is one thing, cutting the throat or the head and holding down the animal while it dies under your hands is another. You can feel the life draining away with the blood. While we were plucking, a tedious and drawn out exercise, we philosophized on why that is. The trigger pulling creates a distance, so the kill "doesn't touch you" physically. The other was that when killing in a fight for instance, there's anger involved or self defense, so a whole set of motivating and pushing emotions and hormones kick in. Cutting the throat of a cock for food has none. There is just the utter unpleasantness of it all and nothing to dull that with.

Since this is a family friendly blog I'll leave out the more gruesome pictures.... 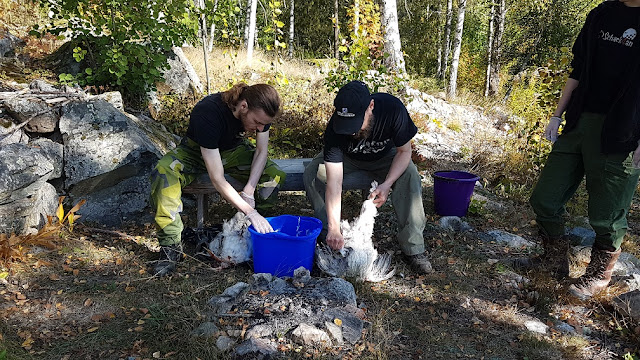 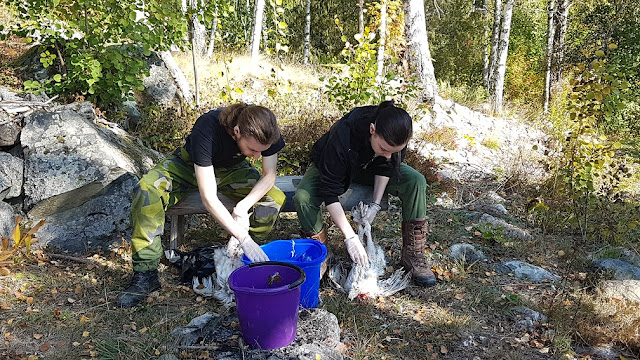 But that same evening we were on our way to get a new chieftain for our feathered clan! I named him Speckles and he is a son of one of our previous cockerels, Sirius, that we sold to friends of ours some years ago. He hatched this spring, so I take it that he will become quite impressive, when he has fully grown! 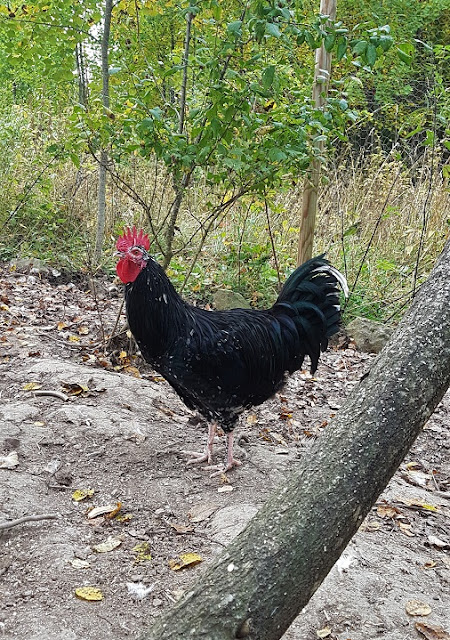 I just had to include the next picture..... 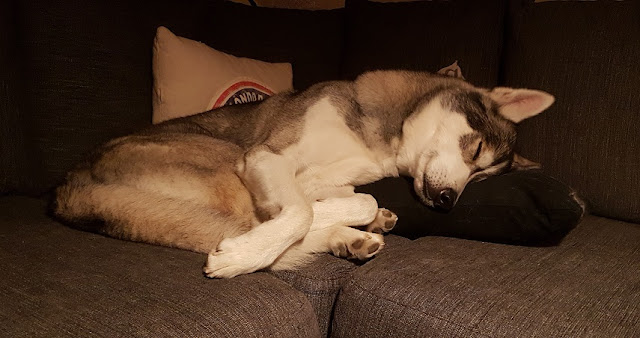 Sunday saw us heading up to our kiln. It had been opened up on saturday and today the packing of the charcoal was to be done. We actually went there for social reasons, not being able to really actively participate. This years kiln turned out to be a fiery one with exceptionally much glow and heat still left in the bottom, despite being dormant for 2 weeks instead of 1!

After all coal was packed, we got 277 bags this year, a group was being kept busy dousing the place where the kiln had been. All the water that was left over, several 100 liters, were being poured into the leftover pit. 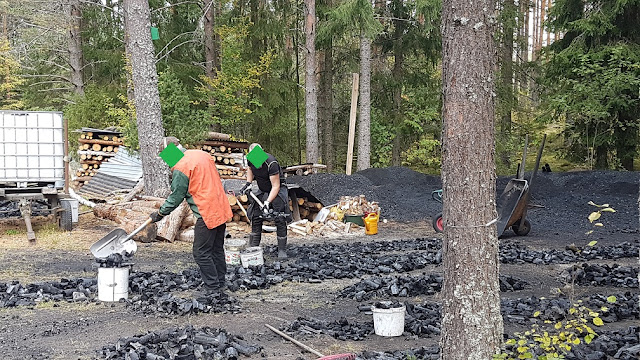 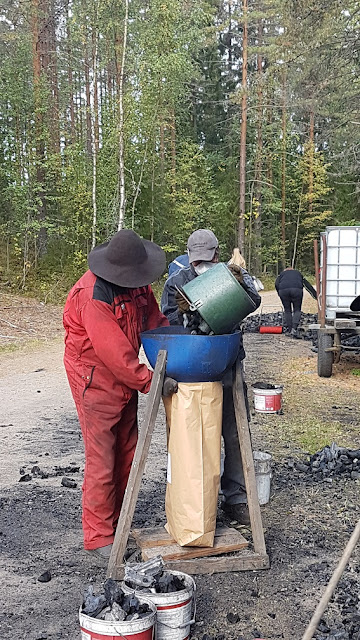 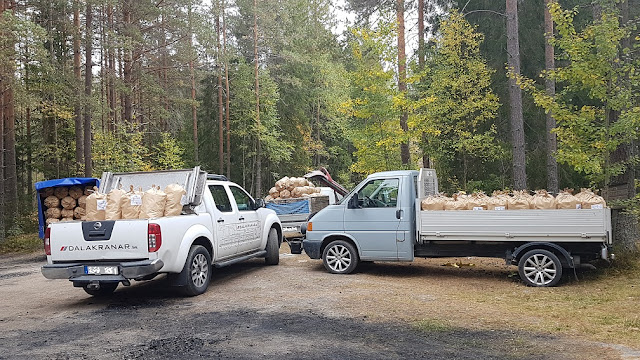 We had lunch there and did our social thing, talked, cracked a few jokes but after all was done a silence fell. Those having worked there this weekend were clearly beat. The average age is higher than my own, I suspect. Time to pack up and head home, since we had other plans still! 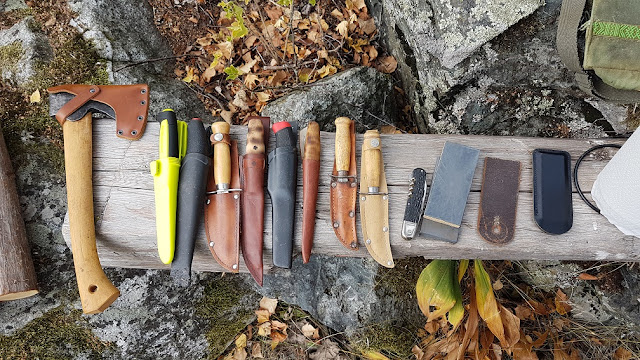 My kids, and especially my son again, wanted me to show them (again) how to take care of knives. They had neglected their own these past years and wanted to pick up on it again. Some knives had gotten rusty, others dull. And I must confess that I too had been negligent of a handful of mine. Another plan was to carve some more wooden butter knives and marmalade scoops. So we collected what we needed and gathered around our fireplace. Here I tried a first; lighting a fire with flint & steel! I gathered some birch bark, scraped the surface into a powder and very thin strips, took the charcloth I had made at the kiln, struck..... and the first sparks took! I quickly transferred the cloth onto the bark and blew.... and blew.... A fierce glow erupted, smoke escaping the birch bark roll. I blew some more. More smoke..... and then the cloth had burnt up.

So I made a second roll, but this time with much more thin bark and no scraping. I took a larger swath of cloth, struck and again the sparks took. Same procedure; blowing, into the bark roll, more blowing, little more still.... smoke forming.... more blowing, prolonged this time. Again a fierce glow.... More, longer and focused blowing...! More glow and then... *poof*.... it erupted in flames! The sense of achievement was quite something!!

We kept the fire going, settled around it and started carving, sharpening, sanding and oiling. And we spent pretty much the entire afternoon that way; both our oldest kids, the Mrs. and me... Our youngest one had curled up on the sofa in the livingroom, but her absence was noticed. Yet I can not blame her. 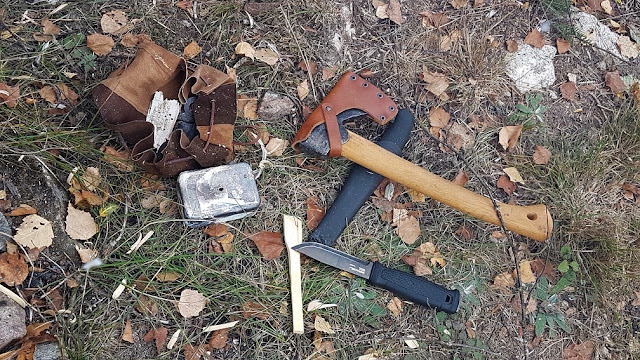 For the carving we had saved 2 pieces of juniper wood, which I cut and split up, again showing the youngsters how to do that. Pretty quickly everyone settled into their routines and we fell silent. 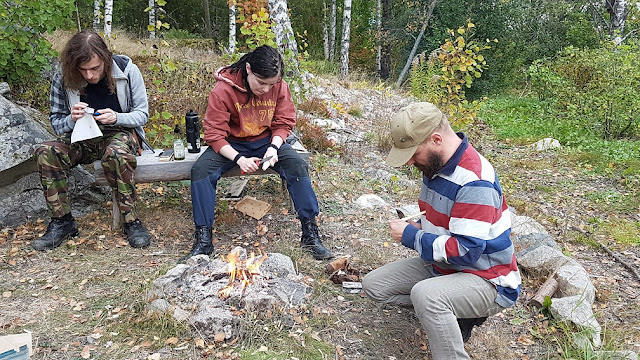 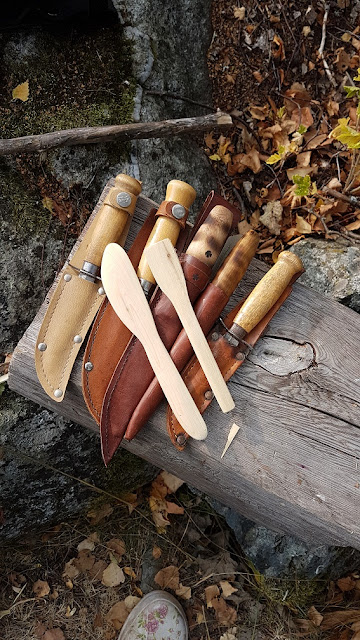 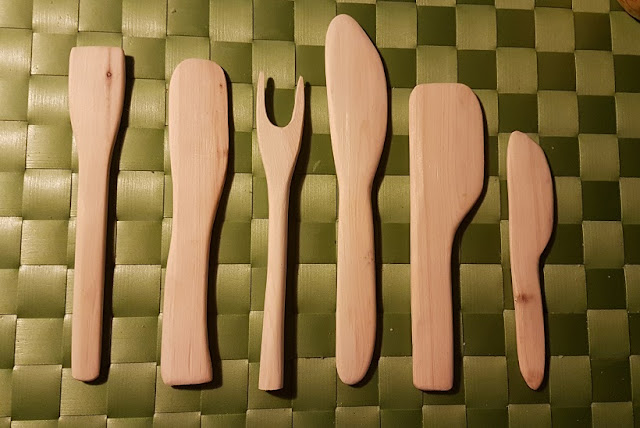