After my cave adventure and a nice, quiet gathering with some of our "local" group, I figured I had found peace of mind again or at least some of it, but then..... Things happened and my stress levels skyrocketed again. This summer is proving to be one of the least relaxed and pleasurable ones so far. So I once again had to find some peace and this time I searched for some of that in a higher place. 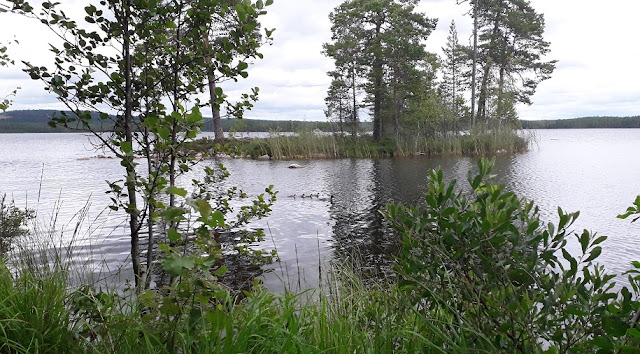 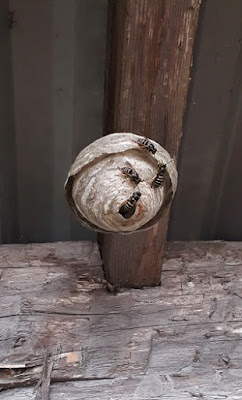 As for the saturday, we were supposed to meet up with a group of up to 10 or so, but during the week one after another declined. So we ended up being 5. I went to the predestined location to not only find Marcus, who had spent the night there, but also a ravaged piece of forest. Or what was left of it. The place had been clear cut in typical Swedish fashion.
Marcus had not anticipated me so early, but we spent the rest of the morning till way past lunchtime talking or just sitting quietly. I spent quote some time looking at some wasps working away at their nest, right above our heads. You could actually hear them working by making soft rasping noises.
Later Martin joined us and later still Mikael and Beatrice. Early in the evening I left for home and left my backpackbasket behind. Bea just loved it, so I ended up just giving it to her.
For me it had served its purposed; being busy fixing it and I got to use it twice. That meant that for me it was done and it felt good to hand it over to someone enjoying it. 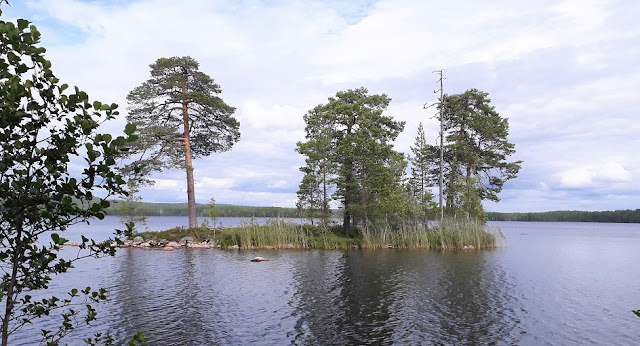 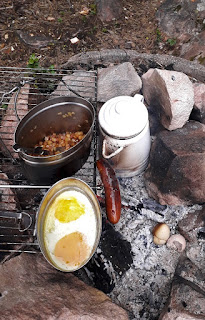 So today I headed out again, wanting to revisit a place I had not been to for years; the nature reserve of the Bispbergs Klack.
The hike I had in mind is not all that long; 5km all in all, I guess, but the terrain is not really easy. When I arrived at the parkinglot at the foot of the massive, I saw that I was not the only one having had this idea. Should've known...
But I set out undeterred, first heading towards one of the neighbouring "peaks", the Jätteklack. On my way in I could see that the area has suffered from recent storms; many trees were down and the needles were still fresh. You would also think that being a nature reserve would mean that it would be left alone, not clear cut. Not so in this place... It does give some variety in scenery and nice views in directions otherwise not seen, though. 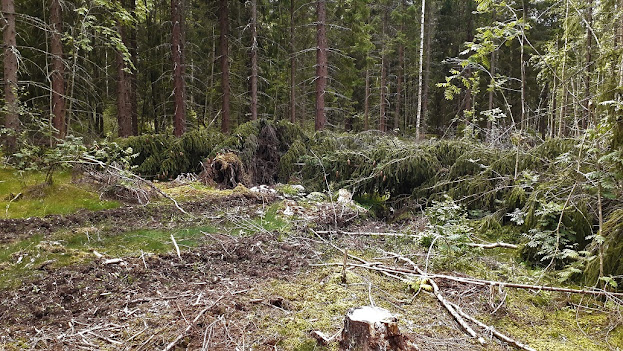 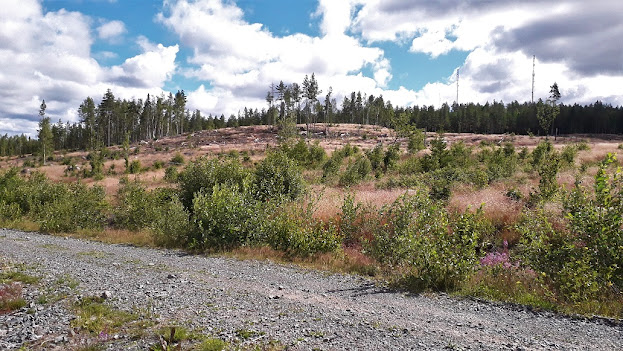 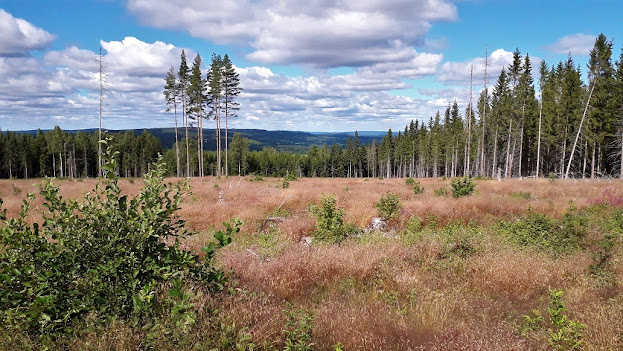 Having reached the first "peak" I settled down for a drink, taking in the scenery and the view. Unfortunately around this time of year the entire south facing cliffs are off limits, due to protected birdspecies having their nests and raising their young there.
I had brought my binoculars, but did not see any of them. However in one occasion I could hear them, just over the edge and down to the right; calls of a bird of prey. A falcon, I think. 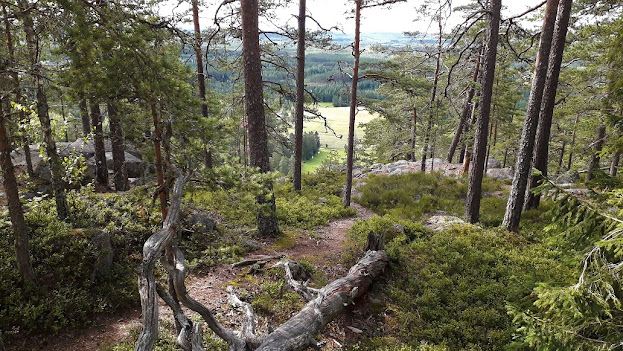 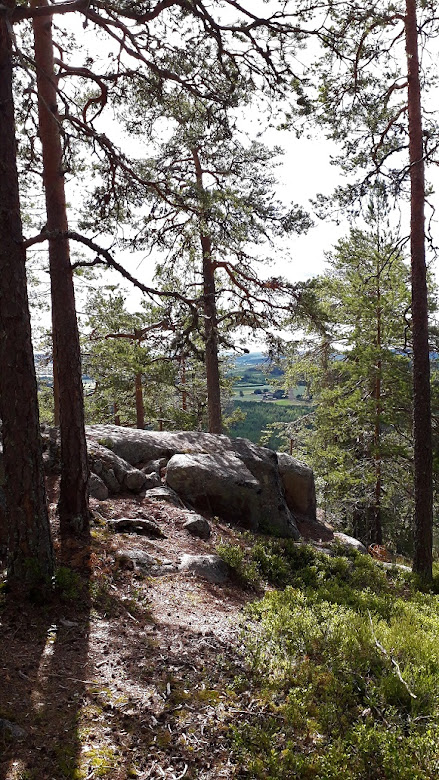 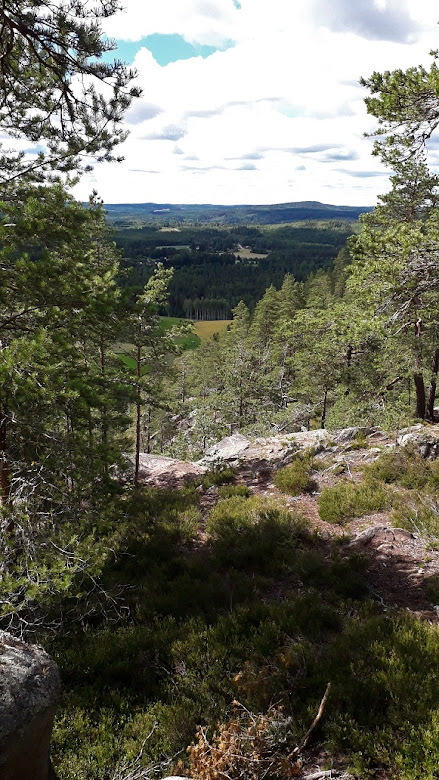 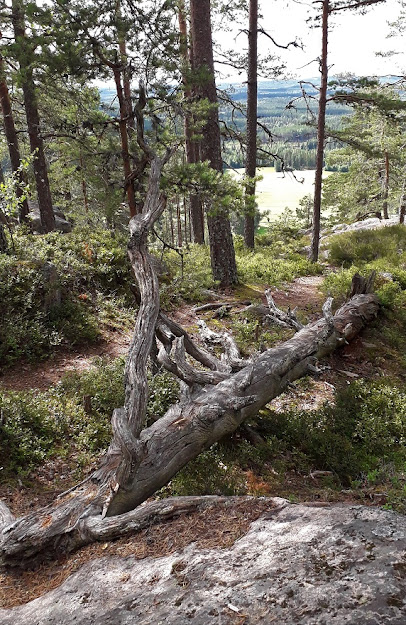 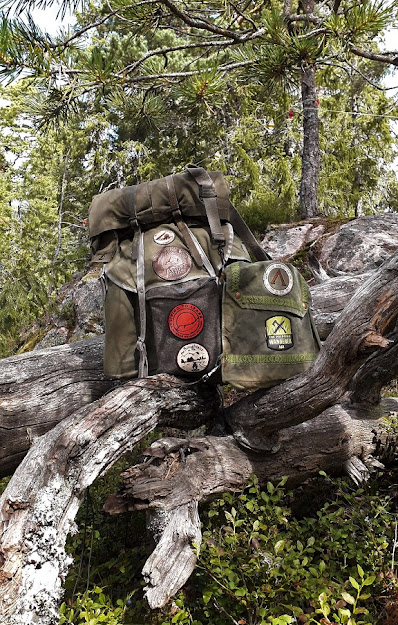 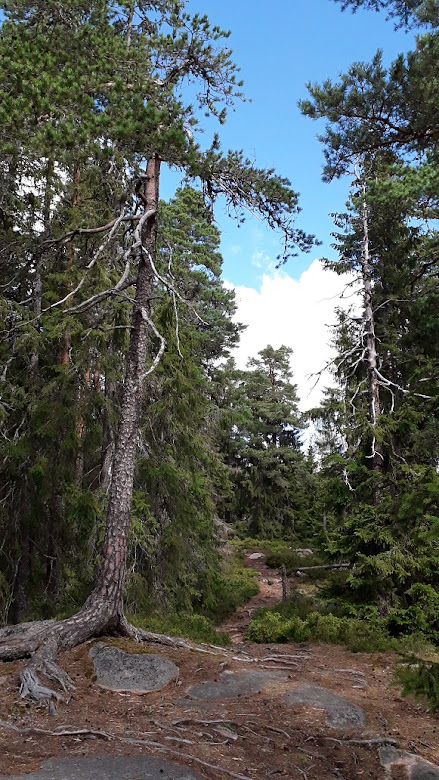 The hike in itself was quite uneventful, except for one near miss, where I stumbled over a root, descending, almost making me tumble down the path I was following. Not a good place to break some bones. I started meeting people, which I could hear coming a mile away, disturbing the silence and drowning out the sound of the birds. These were not the first, nor the last I would meet.
Up here there were many downed and hanging trees too, but these appeared to be a lot older. The constant creaking of trees rubbing against each other, forced me to focus a lot of my attention upward as well as downward, so the going was not fast. 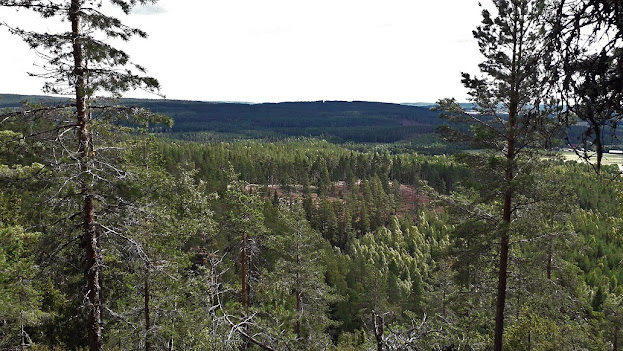 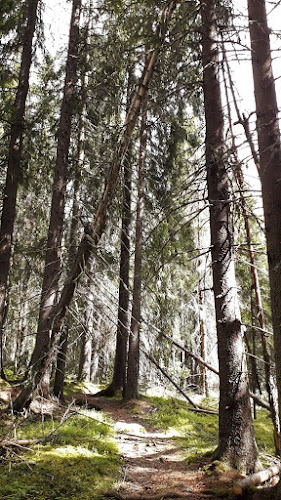 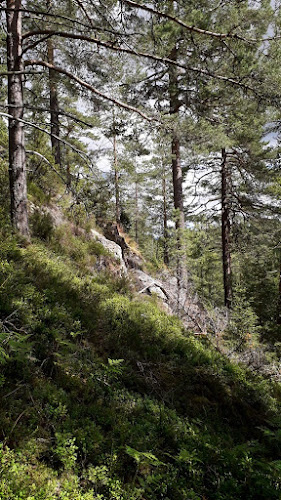 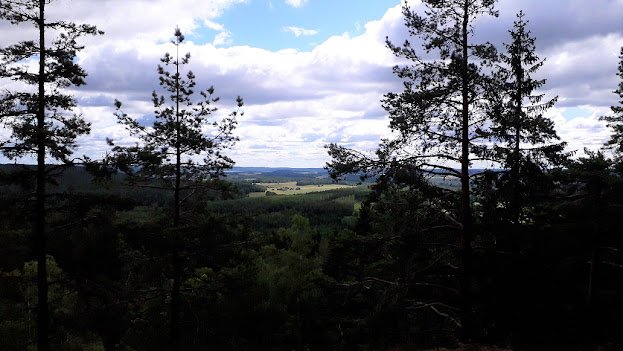 Slowly, but surely I made my way toward the summit. It was warmer then I had thought, yet there was a stiff breeze all the time. Up there I would be quite exposed, so I had brought an jacket. I had planned to be up there around lunch and I made it in good time.... only to find I was not alone.
More people were up there, some with dogs. So much for a quiet lunch with nice views. So I looked for a place off the beaten track and I did not even bother unpacking my messkit to make coffee. Just a quick lunch, snapped some pictures and headed down another trail..... that lead me straight onto a second parking lot, near the mine area. Now I had 2 options; follow the boring gravel road going around and down the hill or back up again and take the main trail down to where my car was.
I went for option nr.2; back up. Up top there now was a shelter, but I feared the state it would be in. And unfortunately I was proven right. The place was a mess! The entire interior was covered in all sort of graffity, both sprayed and written in charcoal. The area was littered with junk and everything covered with ashes and half burnt pieces of wood. Up to and including the benches and table. 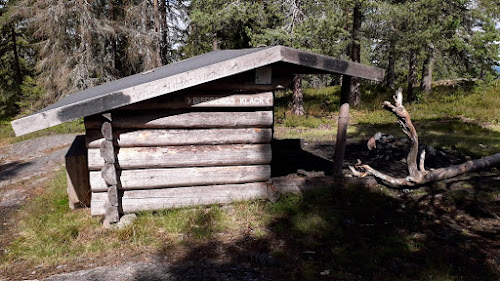 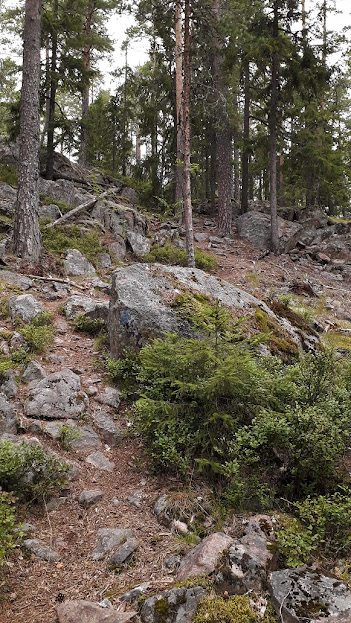 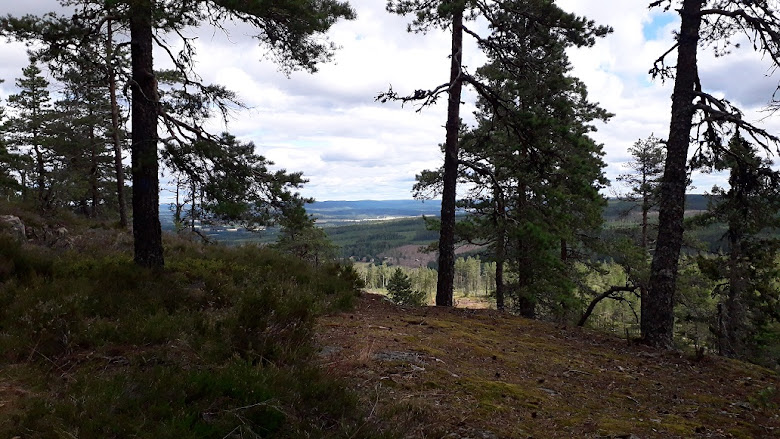 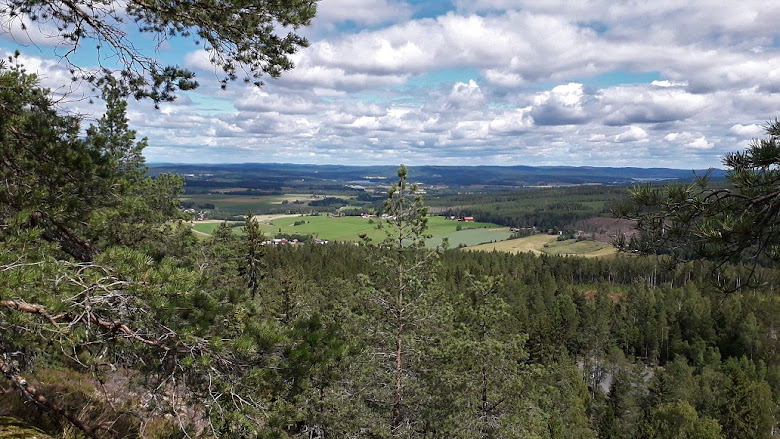 I was back at the car about an hour later, having met still more people on their way up. I had hoped for less company, but should have known better. This is quite a popular destination and especially now that many are forced to stay home during summer.
The best time would be early autumn, I guess, when people are back at work. On a weekday, when the weather is not as nice as it was today. Same as the last time I was here. Then you'd have the mountain all to yourself.
However, it still was worth my while. Just getting out, nose in the air, sun on my face and a few hours of physical exercise lessen the effects of constant worry and stress. A lot! 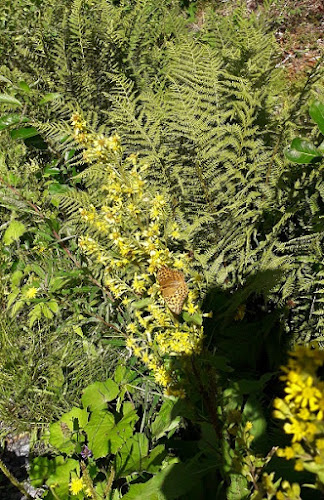