A new life for an old Mora Classic Nr.2

Well, a new posts is waayyyy overdue, so I am pleased to show you my latest finnished project, which has been dormant for a few years now; the revival of a Mora Classic nr.2.
I found this knife is a very sorry state at a barnsale. Cost me 5SEK if memory serves me right and came without a sheath.
Its very tip was broken, the blade covered in some sticky stuff, the edge nicked, dented and blunt. And it had that horrible, deep whine/brick red paint.
Later that same year I came across a piece of leather, while emptying a deceased woman's (former) farm and it was about to be thrown away. No so, when I'm around! The leather was marked with 1953 and "Fäggeby" (the small village the former farm was situated in), along with a branding 517 W. I am guessing 517 was the cow's number and the "W" stood for the owner's initial.
Long story short, I was going to fix up that knife and make a sheath for it. And it did not get much further than that. Until at school we had those mandatory creative classes, where we were supposed to work with our hands instead of our heads for 2-3 hours a week. So I brought this project in. 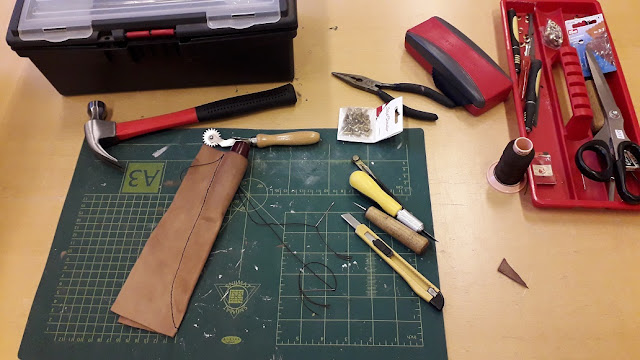 You can still see the tip of the handle in that horrible red. You can also see how I had planned on using the sheath; with the knife tucked away deep. In had previously attempted to wetform the leather, but the only real result that gave, was a vague shape and a strong impressing of the wooden strips I used to force the shape with help of clamps. The stitching is done by using the socalled saddlestitch, meaning you use 2 needles & threads and sew each hole from both sides.
However, as I have a tendency to do, when working freehand, the original plan changed from sewing the beltloop directly onto the sheath, I now wanted the top end to have a small belt and the loop would be attached to that. I have an old knife here that has a similar construction.
However that resulted in the opening becoming to narrow for the knife to slide down and thus the sheath itself becoming too long! Damn.... Now I was facing 2 option; cutting down and restitching the bottom or the same procedure on the top.

I went for the "top"-option, since that would be the easiest to fix. I simply cut the excess off and restitched the top part.
I then redid the earlier mention construction of the "belt" and beltloop, allowing a little more room for the handle, since that was a very tight fit earlier.
The leather in these pictures has not been treated yet, but you can already see some colour difference, despite being from the same piece of leather! That piece also has varying thicknesses. The sheath is slightly thicker at the top and the bottom is actually quite thin.
In the meantime I had also begun to sand away that red paint. I sanded.... and sanded.... and sanded.... and sanded some more. In the end I was left with a bare handle with the grain being deeply stained by the red paint. Yet this was not what I was aiming for as will be shown later on. 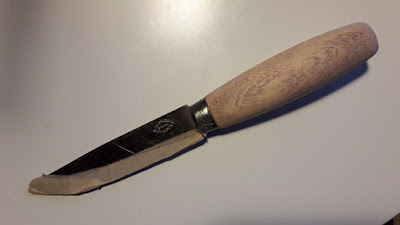 The final steps were colouring the handle and greasing the sheath. The latter was easily done and I used 3 treatments of saddlegrease, giving the leather a nice deep tone. Colouring the handle though was a tad more problematic. I had already oiled it with linseed oil, seeing if the pale wood would get a deeper hue. I was not satisfied with the result, so opted for a treatment with a flame, as I had done before with another Mora. However the oil prevented the wood from getting stained by the flame... until it got real hot and catching fire! It left its mark, so to speak.... When done I added a final, personal mark to sheath and handle and now both are ready to serve once more. 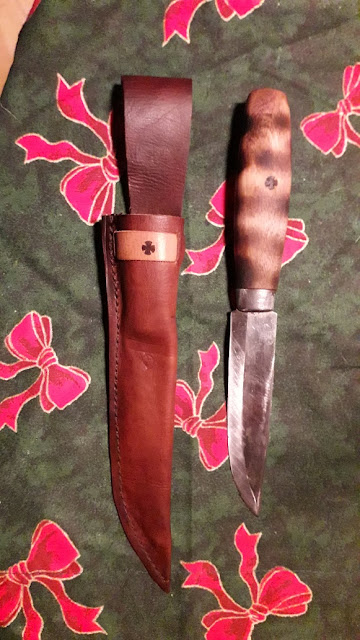 Email ThisBlogThis!Share to TwitterShare to FacebookShare to Pinterest
Etiketter: DIY or Do It Yourself