Well, there's no denying it anymore; I am broken.
These past few weeks saw me struggling with a lot of physical discomfort and pain; shoulders, elbows and right wrist have been acting up quite badly. I sought professional help and the verdict was inflammations in both shoulders AND both elbows; impingment in the shoulders, the right more affected then the left, and golfer's elbows (don't even play golf!) and from the right one the problems were spreading into my right wrist and hand.
This has far reaching consequences both for my professional career as well as privately. The physician asked me if I seriously wanted to continue my current job on the dairyfarm, clearly indicating she would deem that not the wisest of choices. However I am not ready or willing to give up neither my job nor my chosen homesteading lifestyle, so it means a serious alteration of routines and making compromises. The elbows can be fixed, but it might take 6-12 months before they are fully cured. The problems with the shoulders will be permanent, but can be eased with proper training up of certain musclegroups and moderation and adaptation when it comes to physical work.
This message hit me hard and that night I sat on the couch, feeling.... well, not broken, but something had snapped. Some cracks had appeared in that what I perceive myself to be like. I needed time to not just let the inflammations ease down a bit, but also to process it all. I rang my employer and asked for a few days off.
Coincidentally our outdoorgroup was gathering just that weekend and I contacted Olli to see if I could still tag along. The gathering had been in the making for quite some time, but I was more than welcome! So on saturday morning I packed up what I thought I needed and headed toward Spånsan Fäbodar; a collection of huts and cottages on the edge of Gyllbergen naturreserve, just outside the city of Borlänge. There was a trackerscabin, where we would gather and spend the night. I arrived shortly before lunch and after having greeted the Martin and Olli, who were already there I got settled and had a bite to eat. During that time the rest of us arrived and things got crowded. The cabin at times resembled a beehive, buzzing with talk, activity and laughter.
After all had settled in nicely Olli suggested we'd do some snowshoe walking and tracking, the only problem being that there were not enough snowshoes. So he and I figured we'd tag along without those.


For much of the time I was at the head of our little colomn and at one point I decided to play a little trick on some of the followers, one that I had done on several occassions; just stand still and blend in.
It worked rather well, since both Boel and Olli passed me by, while I was standing there in plain sight. I spooked them good, when I spoke to them!
The below picture show both the distance and the lighting conditions. It was overcast and grey.

We learned many lessons that day, the most important one being having a good time and keep laughing, no matter what. At places I sank into the show up to my groin and I learned to read the trail of the ones in front wearing snowshoes. If I kept to the centre of their prints, where tjeir toes had left a mark, I could often remain on top of the snow if I gently put my toes onto that mark and then add my weight to the rest. Often, but a lot of times even that didn't work!
I also learned, by watching others, that balance is key! especially when wearing a rucksack. The slightest imbalance and you'll tip over, sometimes ever so slowly, but unstoppable. Getting up proved to be very tricky as well!

The further we got, the worse the snowquality became! And at one point there was just no more going without snowshoes. Both Olli and I had to go down on all fours and crawl our way forward, much to the delight of the others! Inevitably that lead to some clowning around and I must confess this hike was far from the most tactical I had ever done. Every living thing for kilometers around us must have heard us. We did find tracks, but most were too old to identify. A few were still recognisable thought and at one point Olli discovered even some wolverine prints, along with lynx, hare and moose. Very close to the place where the next photo was taken, we spotted a place where most likely a sk. ripa (Lagopus) had had its lair.


After a few hours we came back to the cabin, since it was getting dark and we were getting hungry.
Despite all the close contact with the snow I was surprised to find my woolpants still being dry whereas other pants were clearly showing that they were wet!
At the cabin Lee was about to prepare dinner and while he claimed the little kitchen as his domain, the beehive came to life again; people talking and laughing, Irish music playing (gotta love smartphones, bluetooth and small speakers....... or not), folks bustling about or whittling. Despite all the noiciness I was glad I had come. I had needed this.
After a very good dinner (chili/beanstew) and a beer I was feeling quite content, but still jumped on the bandwagon, when a nightwalk was proposed. We took one of my lanterns and headed out into the crystalclear night. It was close to fullmoon, so not pitch black, but in between the trees the lantern proved quite handy at times. I was planning on stepping onto a big stones being revealed by the melting snow only to see that it was a large puddle on the edge of a stream of meltwater!


The rest of the evening we pretty much sat in front of the open fireplace, talking and Boel singing and playing on her guitar. By 21:30 my sleepinghabits started kicking in and aparently my jawning "inspired" others to start thinking about a good night's rest too.
Unfortunately that was not meant to be for some of us. Some of us were noisily reminded by others that those others slept rather well


And when morning came it was time to pack up, clean up, say goodbye and head home again, but not before we had the chance to once again taste Lee's culinary skills; breakfast in the form of kolbullar (pancakes with bacon and lingonberry marmelade). A dish suited for the circumstances! 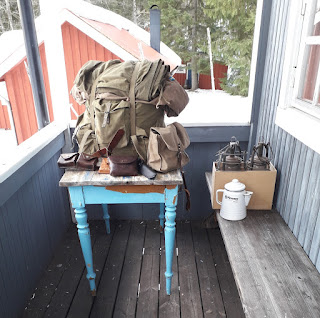 Afterburner;
In hindsight there has to be some geartalk and there are several things I would like to address; first of all a big thank you to Lee for handing out some strange looking Moraknives and Olli for giving me a small version of a Mora Classic. I have several small knives and this one makes a great addition to that collection.
Back to the knife Lee handed out. As I said it is a Mora, but one that I had never seen before. It appears to be a sk. beteskniv or bateknife. I don't know where he got them from, but he figured they might make nice projects for rehandling or something.
Then there is my backpack; a 1942 US Mountain Division framed backpack. I never really tried it before, but remembered not liking the frame too much (with an ampty pack). Fully loaded however it rides very comfortably, even though I only tried it for a few 100 meteres at a time.
There was no need to really use my Garberg birthdaygift, but it was with me for the first time, so the first memories have been attached to it! Hope many more to come.
My 1952 Finnish down sleepingbag..... I still haven't figured it out. Rectangular with one long zipper along a long side. No other openings. Am I supposed to completely disappear in it? It is rather cramped too, but for cabinuse quite adequate.
And maybe I should redye my anorak with a hint of olive, just to blend in more? 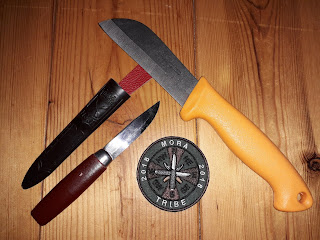 Anyway, I am glad I got to go out and hang out with this gang.
You people are lifesavers!!
Upplagd av Ron kl. 1:38 PM