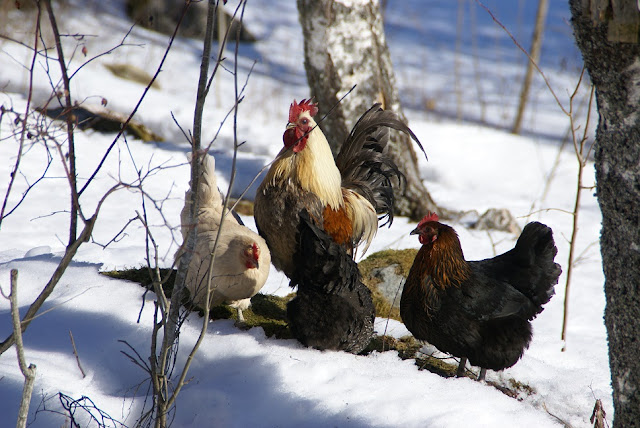 At least it feels like that. A winter that is everlasting. April is knocking at our doors, yet outside it still looks and feels like early februari. We set the clock to summertime, but apart from the rapidly increasing hours of daylight, it still looks like midwinter. There's still a whole lot of centimeters of snow on the ground. Some places up to 40 and the night temperatures still drop steeply, only this week down to -18C. But during the days we have sunshine and the snow and ice are melting away ever so slowly at those spots the rays reach the ground and rise the temperatures to just above 0C. It is windy too and these conditions make that we are not being flooded, but that the water melts and evaporates or runs away. But I also know that the bottomlayers of the snow are ice and watersaturated snow and when temperatures do go up, all that water will be released over a short period of time. Many waterflows have their dams and sluises opened, resulting in a very low waterlevel, ready to take on that deluge.
Spring is indeed around the corner. Whooperswans have been coming in, I spotted a male blackbrid the other week as well as the first buzzard, circling over wooded areas. Flies, some mosquitos and even a lost moth showed themselves too. And with all these changes, so my mood changed too. I am once again facing my springdepression and this year it is looking to become pretty bad. So bad that I even saw myself forced to cancel my attendance for the Basic 2 course, run by Bushcraft Sverige. I am very reluctant to face a group of people and see myself being demanded to interact with those round the clock for 2 full days. My job sees to it that all my social energy is being depleted during the week and the weekends I must keep to myself, just to stop me from tipping the balance.
But it will pass. It always does and I still have the national meeting early june to look forward to. 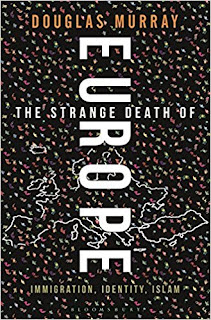 So.... what is keeping me occupied these days then?
Luckily, there's always this pile of books next to my chair. I like to keep it well stocked with titles still to read. Right now I am working my way through Douglas Murray's "Strange death of Europe", a book that, while not being for the novice in English, I would really recommend.... no almost demand for anyone to read. Anyone who has the slightest interest, socially and politically, in what's going on in this continent or the western world at large at present day. Very enlightening, very straight forward and very unliked by the current establishment and it's supporters. So of course it gets labeled "far right", "racist" and all the other labels socalled "lefties" like to stick to folks that do not agree with them. That alone for me is a reason to check these sources out and form my own opinion. One that, I dare say, is mostly much more based on knowledge, facts and information than the average politician or journalist would like or expresses themselves.
Related to that I had a discussion with my family the other day because I felt the need or desire to become more active in a socially/political kind of way by expressing what I had learnt or seen in the way I am most prolific and comfortable with; writing. I thought a blog in which to share information, directly from the source, maybe a book describing my journey and views. Things like that. But my kids forbade me in no uncertain terms to do so! Doing so most likely would affect and damage them. They'd become labeled as "the kids from......." and that would certainly not help them during their further lives as students or employmentseekers. You see, in Sweden discussion when holding any non-conforming or even opposing views from the political left can, and more likely will, have serious, negative consequences.
I wish this was a bad april 1st-joke.


But it is also easter, so I wish you all a happey easter, wherever you are.