The day did not start too well. Well, the night to be more accurate.
It got cold. Temperature dropping to just a few degrees above freezing and most, including me, apparently only had summer sleeping gear. It already was quite cold when I hit the sack, so I kept most of my clothes on, remembering my lessons from the Gyllbergen-meet, but still it was not a warm and cosy night. Due to some beverages the previous evening I had to get out in the middle of the night and walk a bit toward the toilets. A thick fog covered the area. So not just cold, but very damp as well. Not the best of combinations. After being relieved and having circulation going again, it took a while before I fell asleep again, but that happened nonetheless.
The sun rose to clear skies, quickly burning away the fogs and rapidly increasing the temperature in the tent. I slept in kind of late, so after a quick breakfast I headed out toward the festival grounds again. Lots of things to see and lots of workshops/classes to attend! There were workshops on fire, whittling, hide tanning, tracking, talks about bushcraft, integration, emergency preparedness, using a cooking pit and much more. Scores of stands with the practically obligatory sharpies and shinies a.k.a. knives and axes and even a gunsmith with black powder weapons. I love that stuff!! Of course there were some big names, like Paul Kirtley, Harry Sepp and Lisa Stenton adding their luster to the spectacle. Well, you saw the programme in an earlier post, probably. 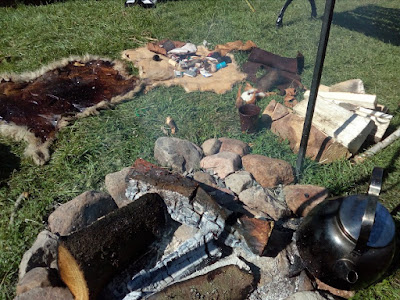 One of the first things I went to do was a workshop regarding hide tanning, given by Mikael, another one of those people that add a dash of colour and flavour to happenings like this festival. I listened and watched, but could not complete his workshop, because of other overlapping workshops. But I did get to drop in, watch and ask on several occasions, so I still did learn a lot!
After that I dropped in at Paul Kirtley's workshop for a short while, before heading off to a talk on tracking, which started a bit later. I planned to go back to Paul on sunday anyway.
After a belated lunch it was time for the Swedish Friction Fire Championship. A burst of frantic activity ensued after the participants had received their materials. If I recall correctly the first flame emerged within 15 minutes! Many red faces and tight muscles were seen under the blazing sun. It had gotten pretty warm by now.
The next talk I attended, was one given by Babek about integration and diversity. Now you might be thinking it was all about immigrants and as I you'd be wrong in that assumption. Yes, that was a subject, but also indigenous youths and even adults and how we all interact. That was the integration and diversity he wanted to address. I must say Babek is not just a very likeable guy, he is also spirited, enthusiastic and laid back, but most of all he was able to inspire.
By then the time had come for dinner and I was ravenous. Whole pork and lamb, slow roasted over an open fire. Add some potatoes, bread and sauces and a man feels well fed. After dinner it was time for Lisa Fenton's talk about her studies on bushcraft and things related. I had listened to her 2 years ago on the first national bushcraft meeting and I wanted to hear if there had been any developments. Besides I am a succer for history and her studies contain plenty of that!! Stuff like this in the end always ends up costing me cash and making me look for room on my bookshelves.....
Not that there weren't any books to buy on location, although I had expected more, really. Which is just as well, keeping me out of trouble!!!

After that it was once again time for socialising and leisure, which was seen to with great enthusiasm by many! I did end up in the same corner as the night before catching up with old friends and new ones. The short night and the beers persuaded me to turn in rather early that night.... in shrill contrast to some (or many) others.
During the day we had seen to it that we had some logs for the tentstove and we intended to use those if necessary!! But that night was not quite as cold as the previous one, despite crystal clear skies, displaying a grand starry night. One would almost forget the proximity to the urban world around, but cars and planes did break that idylle on a regular basis, unfortunately.

Email ThisBlogThis!Share to TwitterShare to FacebookShare to Pinterest
Etiketter: Bushcraft