While I was cutting firewood I saw a couple of chickenhawks today. After I heard one call I started looking around to see where the calls came from and spotted one circling overhead, gliding effortlessly and I had the distinct feeling it was watching our chicken coop. Then I heard another one call somewhere behind me! I wheeled around, just to see that one attacking a magpie! That one got away, but the hawk involved was bigger then the one I was looking at. That means no free roaming for our chickens for a while! And that after they are allowed to do so again after the bird flu "epidemic" (which was more of a panicky reaction to a totally blown out of proportion string of events). And speaking of chickens.... they act kind of weird, whenever they hear us opening the door and walk into the garden....
Unfortunately 2 of the 3 cocks have to go. One, Weasley, is a mean son of a bitch and the other, Dr Watson, turned out to be a weak cock. He is not only being bullied all the time, but a complete outcast too. Those two will make a good "cock au vin" someday (soon). 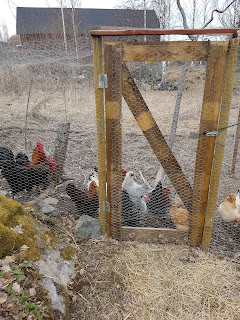 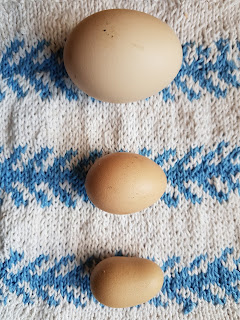 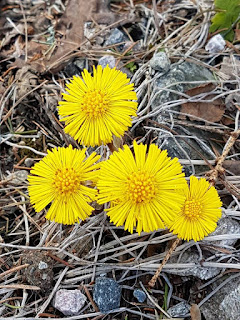 Spring is inching its way across the land.
But winter is not giving up. Not just yet. We have had a few days of sunshine and warmer weather, but these quickly became outdone by a new spell of cold weather. Temperatures barely reaching the plus side of the Celsius Scale during the day, dipped well below during the night and we were treated to snow showers. Not many, but still. Last year I started sowing on this day, but this year I will wait a little longer. It simply is too cold.
Gardening is slow, nothing much to do yet but the lakes are all but icefree. That could mean that the frost has left the ground enough to start work on that; finishing the fencing around the garden, so the dogs can be outside... And shed their hair there!! It is a hairy mess ínside, because of it.
It gives me plenty of time to think over the projects for this summer. As said there is the fencing and we need a doghouse too. In a month or two we (hopefully) will be done with exchanging the sewagesystem and in order to get that going we need to take down a handful of mature trees. That means a lot of sawing and cutting. Splitting and stacking too, but that can be put on hold for a while. There is also the greenhouse that will be built onto the southern wall and we want to reuse the timber framing from the garden shed for that. It has to be taken down anyway in order to have room to manoeuvre when doing the sewage-job. And if that's not enough there will be the sowing and planting and, depending on the outcome of the sewage-job (and the spread of the lilies of the valleys we have), we will be building a goathouse and -pen. That means more building and fencing.
And for bad weather days we have some plans too!! The heatingsystem for one. By the looks of it we finally will be able to get and install 2 hotwatertanks, meaning decent showers for all, a steady temperature in the house during winter and, unfortunately, a higher consumption of wood. But if we simultaneously install a batterypack and solarcell charging system, we will have independent heating and hot water supply year round. With any luck taxreturns will cover those costs.  Another project will be the reversing of the livingroom/kitchen arrangement. Those will swap places, meaning more day/sunlight during winter in the kitchen, where we reside most and less in the livingroom, which we use mostly during evenings anyway. Kitchen will be a lot bigger too, so more room for all of us, reducing the risk of bumping into one another or getting in each other's way. But these are projects that can be put on hold for those late autumn days, too. Practically everything we need for that we already have, except for some new plumbing.
How are we all going to do that? No idea just yet. The whole sewage business will be taken care of by a professional, so not much for us to worry about. We need to take care of the removal of the trees and I will not try to do that alone! The same goes for the installation of hotwatersystem, so all that means a lot less work to tackle by ourselves.

In the meantime I hope you all had a good easter. Kids are having their  spring break/easter holidays and already are bored witless and I am waiting to start the sowing. It simply has been too cold for that, but apparently we will see the nightfrosts disappear. The lakes are all but icefree too now, which would mean the topsoil will be workable. I ordered a bunch of seeds; tomatoes, cucumber, but mainly herbs. Herbs for tea-making! Given our love for coffee and tea, we want to give making our own herb teas a try. Too bad we can't grow our own coffee though.... 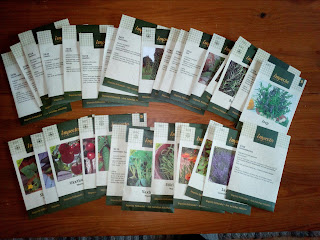 But before the spring break came, there was a day of open doors at the school of our youngest daughter and my wife, who is now a teacher there. Such an occasion is not only good to see what's going on in school or meeting other parents. It sometimes holds pleasant surprises too. I could not pass by the schoollibrary ( of course) and behold..... they were selling off "old" books. You can see where this is going, can't you......? Yes, it cost me dearly. A whopping 15sek. For the whole lot! A good thing our to-be livingroom will be divided into a tv/launch half and a library/study half. We are running out of bookshelfspace! 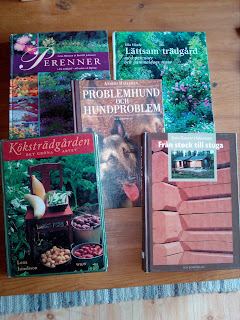 Other books have found their way into our own library this year too....
The first were part of a great deal (real cheap) including some military history books (not relevant here) and the latter I got to support a local writer, despite having read them, so I went for the pocket versions... A couple more moved over here, but these are subject of a next post, since they proved to be of a very significant importance. 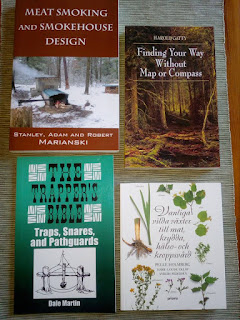 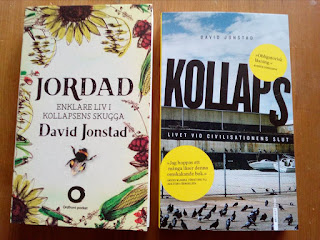 An update on vacuum sealed food

Since we have taken up vacuum sealing food quite recently, there still is a lot we need to learn about it. Scouring the internet for information on the subject, I came across the following article and thought it might be a good idea to share it with you.
It comes from readynutricion.com and was written by Tess Pennington.
if you follow the link you will find more information about oxygen absorbers and related topics too.

Vacuum sealing, or ROP (Reduced Oxygen Packaging) slows down the process of spoilage by reducing atmospheric oxygen, and creates an anaerobic environment that  limits the growth of aerobic bacteria or fungi, and prevents the evaporation of volatile components. Vacuum sealing is often used in combination with other packaging and food processing techniques.
As effective as this food storage source seems, it could put your health at risk. There are certain types of bacteria that prefer low oxygen environments and will grow on foods that have been vacuum sealed. Knowing the dangers that these bacteria possess can help you avoid them and keep your food storage safe.

Even in an oxygen-depleted environment, Anaerobic organisms can proliferate, potentially causing food safety problems. Botulism and Listeria monocytogenes are examples of pathogenic bacteria that cause food borne illnesses from growing and thriving in an anaerobic environment. Moreover, these bacteria have the capacity of growing at a faster rate in vacuum sealed foods due to the oxygen-free environment as well as the fact that these bacteria are not in competition with other spoilage bacteria. These bacteria often do not produce noticeable changes in the foods; therefore, relying on sight, smell and taste would not be helpful. However, only a tiny amount of these spores (a few nanograms) need to be present in order for them to be deadly.
According to the FDA, the following are dangers associated with vacuum sealing food sources:

If you have  taken proper steps in preparing your food in a clean and uncontaminated environment, then this should not be a problem. However, if there is any question about the safety, then err on the side of caution and do not vacuum pack the food, as you would be creating a perfect breeding ground for bacteria.
Follow these guidelines to properly vacuum seal food:


Which Foods are Safe and How Long Do They Store?

Above table adapted by Tilia Inc. from Dr. G.K.York, Dept. of Food Science & Tech, U of California, Davis
Vaccum sealing food can be a productive way to maintain your food source as well as prolong its shelf life. Ensure that you take the proper steps in handling and storing your  food to reduce the presence of bacteria in your food storage.

vacuum sealing can be hazardous to your health
Upplagd av Ron kl. 11:29 AM No comments: