Spring is here!
The sun is shining and the thermometer is pointing at 19C in the shade.
The air is filled with birdsong and calls. Flights of geese, swans and cranes pass overhead all the time and in the garden the snowdrops and crocus are blooming. Virtually no snow or ice remains in our garden.
However it is a sad day. The one thing(s) that I really was hoping to see, did not emerge. No bees....
So I opened the hives and both were stone dead. The probably cause is famine. There simply was not enough food for them last year to gather enough and build a strong hive. I tried to help them by feeding them sugar water, but they would not take that very well.
Checking hive 1, the weakest of the two, I found that many bees were stuck inside the cells trying to get the last food and died there. The main clusters were covered with mould, so I think they died some time ago. There were thick clumps of dead bees beneath these and these were decaying pretty bad already too. When I brushed off the dead bees from the wax there too many bees were stuck inside the cells. They had only built 2 combs, but not filled them, so this was really a very weak hive.
One I sort of expected to not make it, but both? That is a blow....
So I checked hive 2 as well. Same scenario, but with a difference; there was one comb still filled with capped honey!?? And they had been expanding pretty well, building 4 new combs too.

Be that as it may, it is back to square one again. Well, not entirely. We already have the hives and the gear.
Just no bees..... 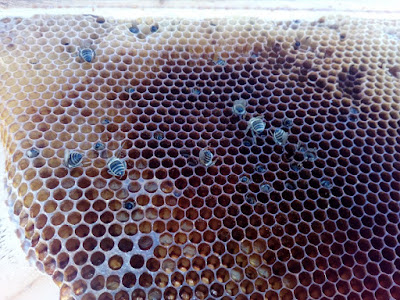 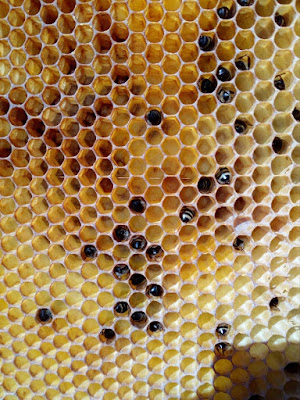 Email ThisBlogThis!Share to TwitterShare to FacebookShare to Pinterest
Etiketter: beekeeping

The birds are singing, the snow and ice are all but gone. We have passed the springequinoix and brighter days are ahead. The first migratory birds are returning. There are male blackbirds all around us, whooper swans up in the skies and in the field. Buzzard were seen soaring through the sky above the vantagepoint above our village and last night the first four cranes passed over, announcing the coming of spring with trumpeting sounds.
We can smell the lakes and the soil again, mixed with an unmistakable sweet scent. Sap's rising!

As an afterburner from my previous post, questioning the viability of continuing this blog, I decided to go for it after all. I like doing it too much to just quit and in becoming silent I would see myself as a part of the problem(s) I address regularly here.
One of the key guidelines I try to live by, is being the change I want to see. And by showing that I hope to set an example and maybe even lead by it.
Another thing I like to do, is to challenge and analyse myself. For me this is a prerequisite for personal development and growth. Changing jobs or surroundings, leaving comfort zones, despite clinging to them and trying new things, although I really do not like change..... all these things happen regularly. Thinking out of the box and questioning common ideas/beliefs or official policies are part and parcel of my everyday life. In other words, trying to remain open to other points of view. And every once in awhile that means letting go of things too.
So I cleaned up my act, left a number of forums, cleaned up contact lists and removed a number of blogs that I used to follow. All the things that did not give me anything new or only confirmed my current point of view. This cleaning up business had another, more profound reason too. Turned out I was not nearly being as openminded as I thought.....
Another thing I have adopted, is a challenge I once read on a Swedish bookreading network. Every once in a while pick up a book of an author or on a subject one would usually not read or even completely out of one's area of interest in order to open up to new views and/or facts. Personally I feel that the latter would be very demanding in as reading a totally uninteresting subject would make it a struggle to finish such a book and by not finishing it, it might just add to the prejudices one might have. So I compromised somewhat. There had to be some relation to me, just to make it through the book.
The first one I picked up was written by a Pakistani - Qaisar Mahmood. The book in question is called "jakten på svenskheten" or The hunt for Swedishness (free translation by me) and was actually recommended, and I fully agree, to both immigrants and Swedes alike. Both sides really would learn a thing or two!!

Another author I am currently reading/studying is Richard Dawkins, an ethologist, evolutionary biologist and passionate atheist. I came across him in a highly unlikely manner; him being featured on the latest cd of a Finnish metalband called Nightwish and their latest album Endless Forms Most Beautiful. Now I usually do not have much with music, but this album to me is special in as it touched me deeply both in sound and in lyrics.

Now both authors were/are completely new to me as are their subjects. However both authors also do touch some common ground with me. Mahmood in being an immigrant, seemingly struggling in or with Swedish society, wanting to find out what it means to"be Swedish" and Dawkins by questioning religion and its effects on society and history.

But in the meantime I have gotten into a bit of a tight spot. One that had the potential to completely overthrow my life..... and not just mine.
Due to various reasons, up to and including my own emotional and mental spiral downwards towards the gaping abyss of ever lasting doom, my wife delivered me the shock of my life, by announcing her wish for a divorce.
And that shook me to the core. With that announcement she dealt me such a savage blow that I finally got some sense knocked into me. I will spare you all the details, but thankfully she did not press on. The only thing stopping her were my pleas to not do so. Turns out it was an act of desperation from her side and that move eventually created room for dialogue. It also ensured that I first went through an emotional discharge, unleashing a lot of bottled up feelings, anger, pain and frustration, clearing the air for myself as well. But most importantly it made me realise and understand what was going on and how much I actually still loved her.  And that still is with all my heart, even after knowing her for almost 30 years. And the feeling is mutual.
So for now a relational disaster has been averted and we are working on growing toward each other again instead of apart, We are confident that our future together still exists. So much so that we are willing to go through with another change we were considering; a move.
Yes, we actually are considering leaving this place...
Upplagd av Ron kl. 7:39 PM 4 comments: