There is not much stand still here at Casa Chaos. Apart from the bee business we of course keep busy with other things too. It never really gets boring around here. 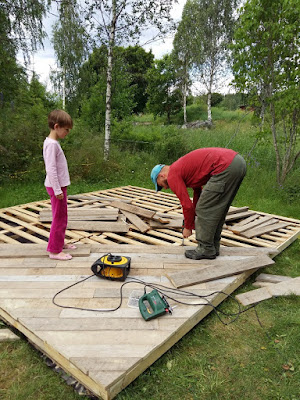 For one I built a patio! OK, I had help.... We urgently needed a place to hang out in the garden. It can't be all work, no play. Keeping priorities straight 'n all that. I have been gathering quite a lot of materials here, most of them for free and/or discarded by others. The frame is made up of transports pallets, which I collected from a store, selling outdoor stuff like swings, trampolines and such, run by a Dutch couple. The deck is made out of the planks I saved, when I cut up a large amount of redundant potato crates. The pavilion I got real cheap, when someone wanted to get rid of it and the pallet bench with cushion has pretty much the same story. 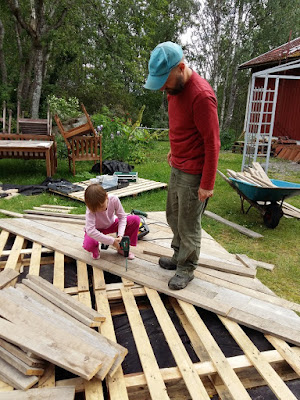 A day of screwing around (literally) and we had a nice place to sit and hang out. The camouflagenet has been lying around for years, since no one wanted to buy it of me. So why not use it?
And that investment of time almost immediately paid off, because on the second day after this job was done, we could welcome a guest from the Netherlands. An old colleague from our police time, whom we had not seen for more than 16 years. It was nice to chat about things and people from a shared past. Made me realise how lucky we have become with this place we call home now, how we have grown as people (mostly old...-ish...) and how perspectives and preferences have shifted and changed. 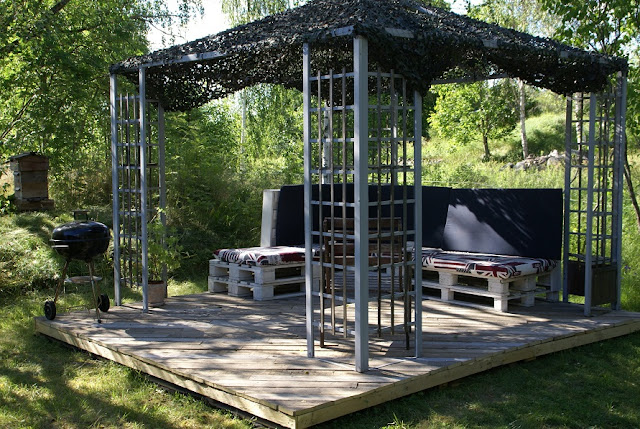 And since the weather remained fair that week we also tested the patio under barbecuing circumstances. It held! But we do have an ant infestation and despite trying every trick we knew of, we could not get rid of them. I hate to admit it, but we used non environmentally-friendly means... After being bitten and sprayed upon with acid regularly it quickly stops being a mere nuisance.
But why stop at that? After the B(eehives) comes C(hickencoop) and a D for dogproofing the backyard. That means building a coop and fencing in a substantial part of our little patch of earth.
The floor of the chickencoop is ready. Again using pallets as a base on top of stones at the corners and central resting points. I closed up the floor by screwing salvaged planks from other pallets in order to be able to insulate it later on.

The summer so far has been reasonably sunny, dry, windy but not really warm. Not much of swimming weather. However the lakes are at a low. There's all 20-30cm broad yellow band around the shores, where the reeds usually would have been submerged. The streams around here are shallow too and we constantly go from normal forestfire risklevels to high and back again. That's when the rain, mostly as days with showers, have passed. Then the sun comes out, the wind picks up and within a few days the levels go up again. We had a grassfire due to lightning strike nearby, but that was dealt with when the rain came pouring down. 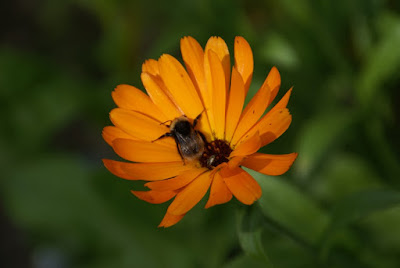 These conditions favor plant growth and everything is lush and green. We had a bloomexplosion some weeks ago, just at the beginning of summer. Everything was filled with flowers, even species that usually do not bloom together did this year and with an intensity we had not seen before. Of course where there are much flowers (food) there are many insects and we are seeing numbers of butterflies, bumblebees and other flying and crawling insects that match the colorful abundance. Unforunately wasps, mosquitos and ticks are thriving too. Our cats and dogs are covered in them and I had to pick 3 of of myself already as well. Checking everyday to see no red rings showing....
Our garden is thriving too. Well, at least we think we are doing quite well this first serious gardening year. The potatoes are growing well and blooming prolifically (quite surprised by the beauty of its flowers in mauve and white), the kale and cabbages are not being devoured by pests (yet) and the combination planting seems to work as we are generally not experiencing any pest problems. The only plants lagging behind are the beans, peas, leeks and salad. Those 2 plantbeds are not doing well in general. The soil is very compact, heavy and rock hard when dry, so we really need to add loads of compost to those, just to loosen things up.
The tomatoes and peppers in the greenhouse are not growing really well either, but we suspect that that is more our doing. We need to water those much more. I have underestimated the warmth AND the evaporation in the greenhouse. The latter is being caused by leaving the doors open during the day, so bees can go in and pollinate, but it also means a lot of air movement.
As for the greenhouse itself, I am not impressed by it. The overall use seems quite alright, but the quality of the material, especially the foil, seems inferior. It had a roomy fit over the frame from the beginning, but the warmth of the sun and the weight of the rain has stretched it even more and now it is just saggy. It covers the frame loosely, bellowing outward when it is windy and sagging dangerously under the weight of collected rainwater after a severe shower. Upon inspection it turned out the seams attaching the velcro to the foil had started to tear as well. Not impressed at all here!!
Well, I guess that if you pay peanuts you get monkeys.........
Investing in that grass- and weedtrimmer was a good thing. We can now say we have the garden "under control", meaning we can pretty much keep up with the weeding and cutting of both the vegetable garden and the "lounge area".

All around us berries are ripening already; blue- and gooseberries, black currants, forest- and regular strawberries. All of them round, juicy and ready to just pop into your mouth. The rowan are laden with berries too and according to locals these are all signs of a harsh winter. We will know.....

And then.... circumstances forced us to do a drastic thing. We decided that we needed to move one of the top bar hives with its population to our place, because the location it was in is likely to be inaccessible to us in the nearby future. Given the size of the hive and its delicate contents it was a challenge and after a very long and very slow 30 minute drive we came home, put the hive in its new place and had no problems during the entire transfer or immediately after. How the bees will fare in the near future we will have to wait and see. I'll get back to this transfer in more detail at a later date, but soon.
Upplagd av Ron kl. 6:00 PM