All visual footage was done by my father in law

Today was a great day.... a grand one. really.
Today would see us, my wife and me, moving the bees from the first box with frames into a top bar hive. A very first for me, but a very first regarding handling bees in general for my wife! And we did well!!
The bees turned out to be very gentle, not a single act of aggression towards us, despite us handling them, disturbing them, upsetting them and moving them. It, after all, is quite a large operation with a lot of direct handling and a lot of impact on them.
I'll describe the events as they happened as chronologically as possible;
It started by placing the boxes, containing the bees and their framed cells as close as possible to the entrance of the top bar hive (tbh), so that they could get used to the flight direction and location of the entrance. Quite important, since they memorise that location and focus on it. We placed the box there last friday late at night and left them alone over the weekend. They got going early saturday morning, bringing home mostly pollen. A good sign, since that means they have young to raise, which means there is a queen laying as well.
Today the first thing we did, was look at Johans clip again (see the previous post) and we prepared. We put all the necessary tools ready at hand; goosefeathers (no brushes since these are too coarse!), a spray bottle with water (no smoke!), hive tools and a small saw to cut the frames. Then we put on the suits and keeping the citronella-tip in mind (which says using citronella essential oil will make the new home more attractive to the bees), we used a fresh leaf directly from such a plant. I rubbed the inside of the hive and follower boards gently with the leaf.
With a bit of a pounding heart (mine at least) we approached the box and we positioned ourselves at either end of the box and tbh. We clearly decided who would do what in advance. My wife would lift the top, I would take out a frame, we would brush back the bees into the box, she would close up and we would prepare the frame and the top bar in the shade, a few meters to the side) The first 2 frames/bars would be dealt with this way, so the bees would have something to go home to, once we would start moving them over.
Things went rather smooth from the beginning really. The first 2 frames were pretty much empty, apart from some cells being filled with mostly pollen and a few cells with larvae. Despite bees flying all over the place, there were no signs of aggression at all. We both felt at ease, yet focussed all the time and we pretty much copied Johans way of doing things.
However we were in for some surprises!! The first one happened, after we had removed the third frame.... Bees were hatching!! We witnessed the "birth" of 3 bees! What a truly remarkable happening. We watched them, chewing their way through the cap and out of the cell, their eyes light colored and their wings still pressed to their body.... Amazing. And what a privilege... 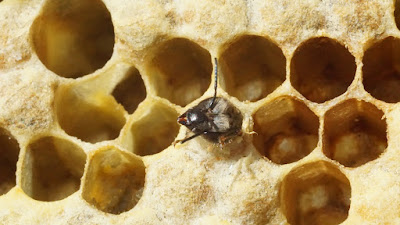 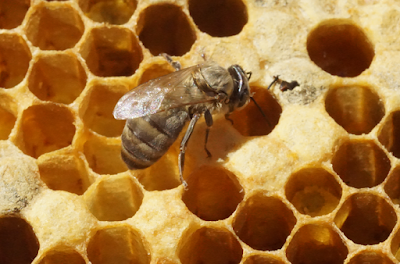 After this things got real interesting!
The rest of the frames was packed with bees, lots of capped brood and honey, quite a lot of pollen and uncapped honey too. Even some uncapped brood.
We lifted a frame, held it over the tbh, keeping an eye on it, taking care none of the bees fell off. We brushed the hive bees off and the flying ones would find their own way to the new hive. And then, with frame 5, surprise nr.2; my wife spotted the queen!! She was quite striking; large and very dark. We moved her over to the tbh, gently brushed her off and now we knew for certain where she was.
After that we followed the same procedure with every frame, doing the last 3 frames in one go, so we could close up the tbh as soon as possible. When lifting the empty top bars we regularly were surprised by the bees yet again. They would flock to the bars and would start to build combs right away! At least I presume that's what they were doing...

The steps, shown in images;
Step 1, attaching the frame to the bar with screws; 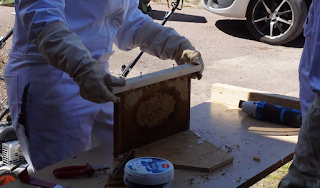 Step 2, cutting the wax and threads from the frame, 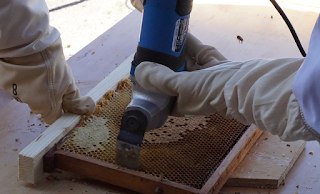 Step 3; cutting the frame at the top, so it comes loose, 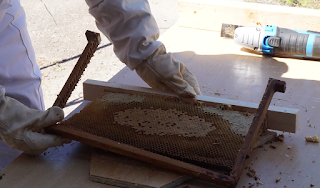 Step 4; cutting the comb to shape using a follower as a template 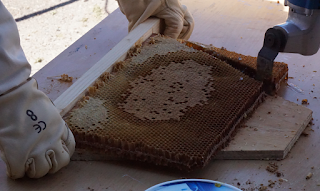 It becomes easier with every frame, yet the whole operation took us somewhere between an hour and a half and 2 hours, including dressing up and preparing. No stings, no mishaps, breaking combs, but another bonus.... Honey fresh from the comb!! It had a nice, rich, intense, slightly "dark" taste... Fit for a king!! 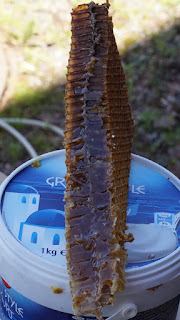 Tomorrow we will repeat the entire operation at our place and I so do hope we will succeed equally well and that the bees here at home are equally peaceful. I think they might be, since I could cut the grass around the box with the trimmer today, while an approaching thunderstorm was rolling in....

I must say that I am quite astonished of us and proud of wife!
I did have a course in conventional beekeeping, 2 years ago, so had been near bees before. But it was no where as near as this! Johans video was a huge help for sure, but also the worth of buying and studying books has proven itself once more.
And then my wife; no sign of fear or hesitation. She remained calm and respectful, even during the last stages, which became quite lively!!
And there was the final gift of the bees; we now have something we both can do and share together: bee caretaking... 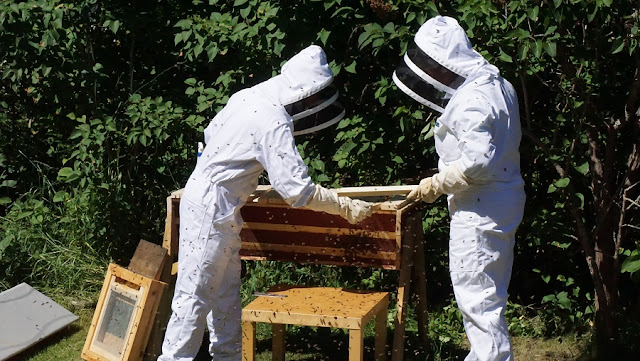 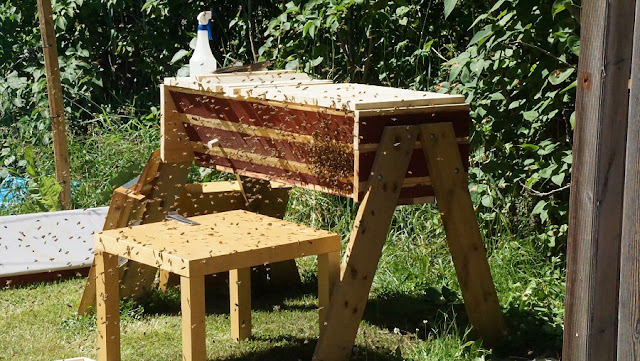