or lightning that is.... And plenty of it too, yesterday.
It had been a hot (at least for me) sweltering day. One of those days the sun beams down on you so hard, that stepping out into the sunlight actually hurts..... or at least is very uncomfortable instantly.
I was a bit worried about our newly planted veggies, despite having watered then thoroughly early in the morning.

Had no time for that the night before, since we went to visit Johan, one of the authors of the Olja fär blåbar book and blog. He has made 2 split-offs (or off splits? or simply split??) from his bee populations and he needed boxes in which to put them, so they can be picked up later and be taken home by me or us (in only 2 weeks. YAY!!). We had a look at his beehives, got a tour around and had a nice long chat and by the time we came home it was 10pm. I really did not feel like standing there watering the plants for another hour or so.... The image is from his blog by the way. I was too busy enjoying myself,  looking at the bees going in and out and seeing one, being busy getting rid of a dead colony member. Simply toss the body out, without making much of a fuss as we humans do....
Anyway... 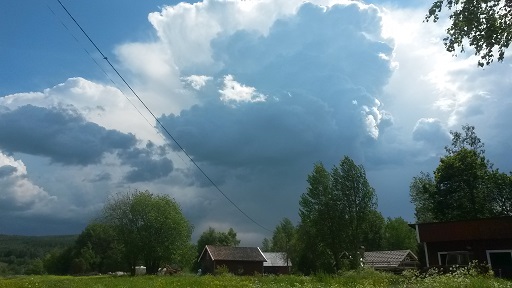 At the end of the afternoon the wind started to pick up again and on the horizon clouds were forming. Judging by those signs and the headache I had been having all day I knew we were in for some thunderstorms. Good thing we did not visit the bees that day! They'd bee a lot less friendly....
The storms kept building, but did not reach us. They reached other places, like the school my wife works or the town were our teens go to school, but not our place. When they came home they told stories about having hail as big as marbles or bigger, about torrential downpours.... and I looked a bit worryingly to the skies above and the fragile plants and greenhouses below.....
After dinner pressure and tension started building again. This time were in for it! And yes, the first thunderstorms of the season became fact. Now the special thing about this place is its location, surrounded on 3 sides by hills, only the west is open and 3 lakes around us, makes that those storms get swooped in, are being forced upward and kind of get hung up over the ridges. The open areas of water make that the thunder really rolls around through the valley, as if some huge dumptruck dumps a massive loads of rocks, that bounce around on the metal surface. The remaining metal ore and water make sure lightning will strike in the immediate area, so noise and visual displays are guaranteed!
All we had to do, was wait for it..... And we were not disappointed.

All electrical appliances were removed from their sockets and we went out onto the balcony, watching the flashes of lightning, counting the seconds between light and thunder (x300 is the amount of meters in distance) and enjoyed the show. And what a show it was. Not so much violent, but scenic.
We saw the clouds drifting in from the west, reaching the end of the valley and curl inward, before they were forced up and over the hills. A thick, dark and churning ring of clouds around us, but we remained in the eye of the storm. Massive downpours up on the hills, barely a speck of moisture on our place.....Gusts of wind bending the trees, rolling thunder around us and lightning around us. Some were horizontal.
This continued pretty much all evening and though the night in varying intensity, but during the night the rain came...... And plenty of it! Luckily no hail or biblical downpours, but a steady drumming rain. Everything looks refreshed and revived in the morning and the heat has disappeared.
Now there is wind in the air, which is cool and fresh, the wind itself a tad cold, a friendly sun in the sky, birds singing and calling around us and the dogs are happy and joyful again. They really suffered during the heat!

And during the day's walk we came across a wonderful surprise, the most lovely scene I have seen in awhile....
In the middle of a field, deep yellow with buttercup, a shiny coat of fur, blazing with a deep copper.... A roedeer and her offspring. No more than a day, maybe 2 old I guess. Maybe she gave birth last night?
Despite the obvious lack of camouflage, the dogs did not spot them and neither did they spot us. The wind blew in between us and we were walking on soft ground. They were maybe 15 meters away from us. So near I could see the spots on the young ones fur. I had time to take my cellphone, take a handful of pictures (why never a camera when you need one?!?) and took a good look at them.
Only when the deer raised her head, did Lester spot the movement and he did his 3B-routine; bezerk bouncing bunny and that gave us away. The deer was startled, but only when Lester landed on top of Rex and the latter growled at the first, did she leap off, followed by the little one. Which can be seen right in front of the deer's left hind leg. 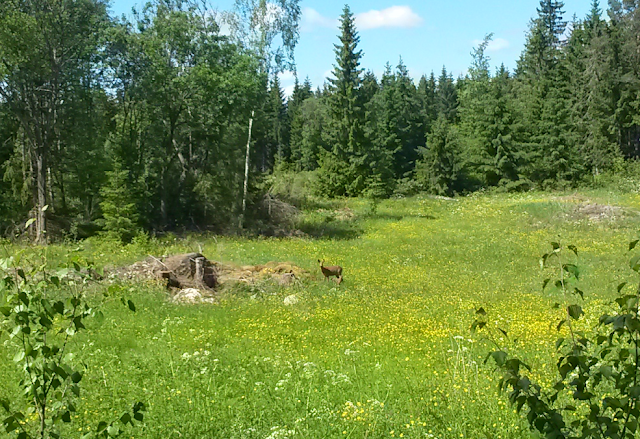 And this one's just because I think it is equally beautiful, if not more.
Saved this one from the greenhouse, in which it got trapped. It wouldn't let go of me and it sat there for a few minutes... Magnificent creature... 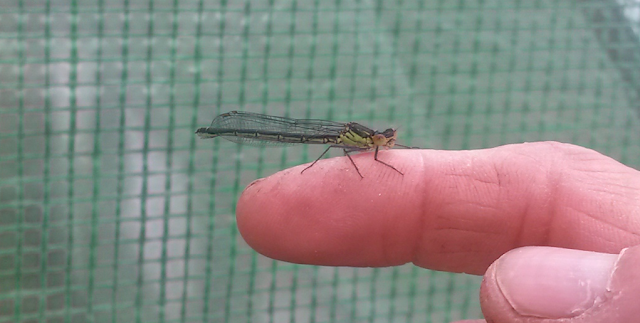