The ice is singing again....

The world is white, the sky crystal clear and it is cold. -14C.
Last sunday my oldest daughter, Annalena, and I went out on a sprucehunt. We would like to find a suitable christmas tree and sprucehuntingseason is open. We found one she liked, but during the stalk we found more than we had hoped for. Rex was with us and all of a sudden he dashed off, pulling me with him. Just over the ridge we had gone up, he stopped. I told him to stay and as I caught up with him I could hear the thumping of a moose trotting away through the undergrowth. No less than 25 meters from the place we had been! It was windstill and there was the ridge in between, so I guess that is why we could have come so close.
As we returned to the dirtroad, we happened to meet a couple we only fairly recently had come into contact with; the woman I had met on the hunterscourse and her husband, whom my wife had met, both being boardmembers of the village association. They were also on a sprucehunt or -scout and had their dogs with them. We passed on each side of the road, saying our hellos on a distance and I asked if Rex could get to know their dogs as a socialising training. That went surprisingly well and we chatted a little more. By then my wife, who I had called, had also shown up with the car and I think that if we had had coffee and chairs, we would just have sat there and had a social gathering..... 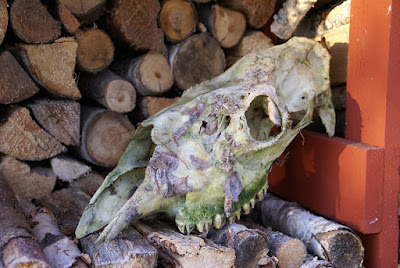 After a while we broke up and Annalena and I continued on our route walking Rex. My wife had turned the car a little further down the road and when we met her again, she asked if I had seen the skull. What? What skull? Turns out there was a moose skull sitting on a stump directly next to the road. And I had not seen it! Well, I was preoccupied I guess. So the skull went into the car too. It was a moose skull by the way. Could've guessed, right? Just wanted to study it.... and have it.
We came home after dark, which is not that difficult, since it gets pretty dark by 15:15 and we were welcomed by the smell of freshly baked cookies and we enjoyed a large mug of hot cocoa to chase away the chill from our bones and fingers. It was very nice to have spent the afternoon out with just my daughter.
That evening, when we, my wife and I, walked the dog again, we watched the starry sky, amazed at its brilliance, its vastness, its clarity and its beauty.... Awe inspiring, humbling and on the other hand filling the heart with joy.
Along with the cold, moist air came drifting in and the entire world is white and glittering without a single flake of snow having fallen. It is magical, fairytale like. In the dark, everything sparkles as if covered in diamonds and during the day, depending on the light it all looks like silver and gold. Natures true riches.

The camera gets to go out quite a bit these days, figuring out how it works and how to operate it with mittens on. Taking them off does become quite uncomfortable and working a camera with numb and senseless fingers is just as "easy" as with mittens on, so...
Not being entirely content with the previous hunt's results we went out on another one, early in the morning. The camera came along too and both undertakings turned out to be quite successful.
The early morning stillness of a frozen forest.... except that it isn't really still. Still plenty of sounds, but somehow they do not disturb the deep peacefulness. The cracking of a frozen tree, the calls of a black grouse... 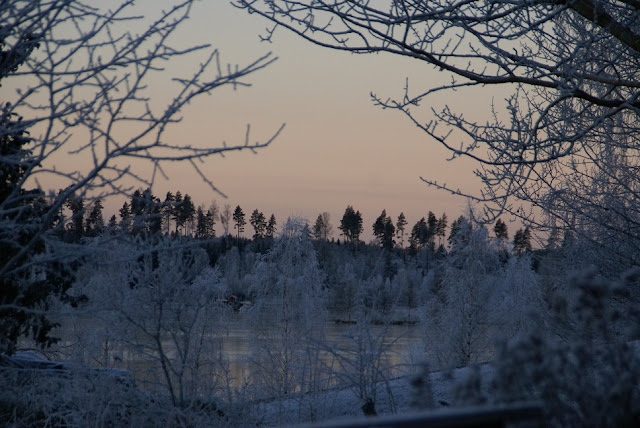 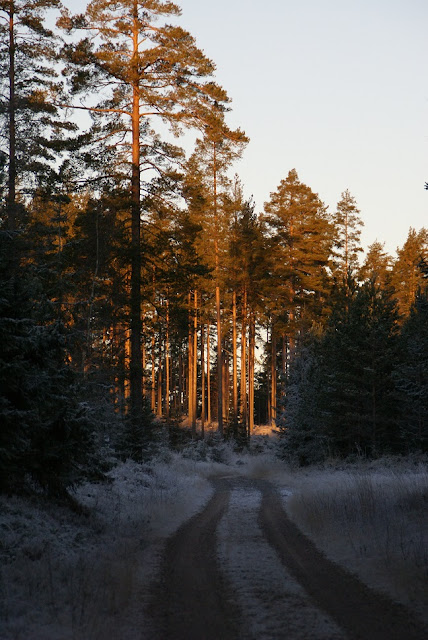 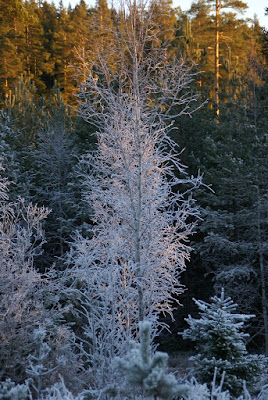 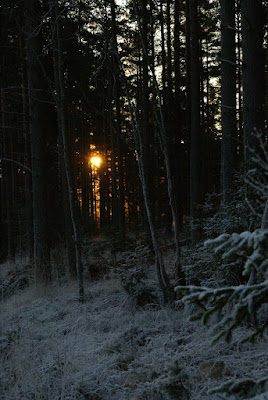 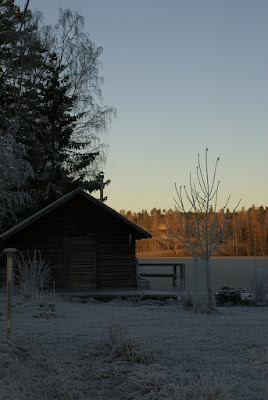 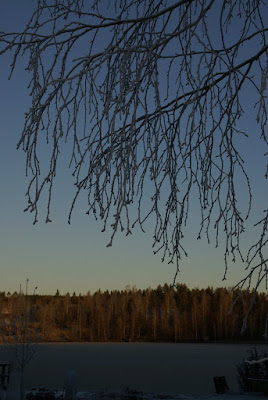 And in the afternoon I was at it again, shooting pictures until the battery died. I could have taken a thousand pictures and still find something new and exciting. Rex was far less excited. Constantly tugging on the leash, unable to control his energy or impatience. He has some issues with himself lately. He's keyed up, energetic, talkative, disobedient, hard to keep in check and when we play, almost aggressive. Guess the changing season is triggering his husky-energy. Born to pull through snow and across ice. Except the snow hasn't come yet.

Now tell me this is not a moose's head... 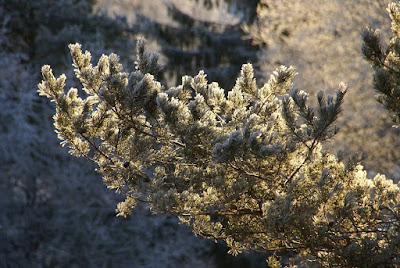 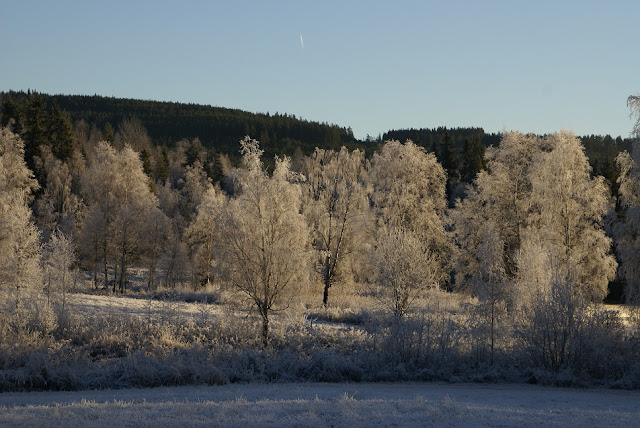 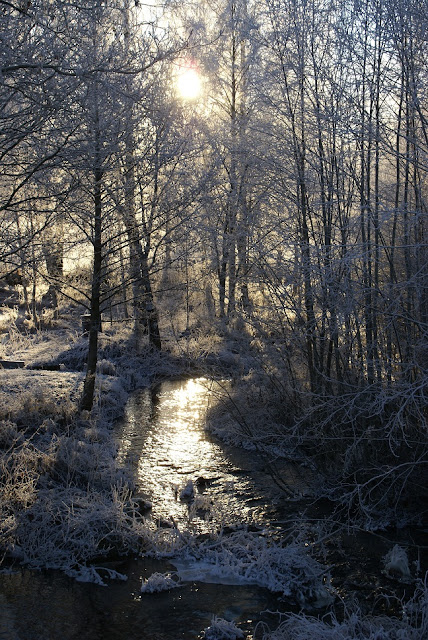 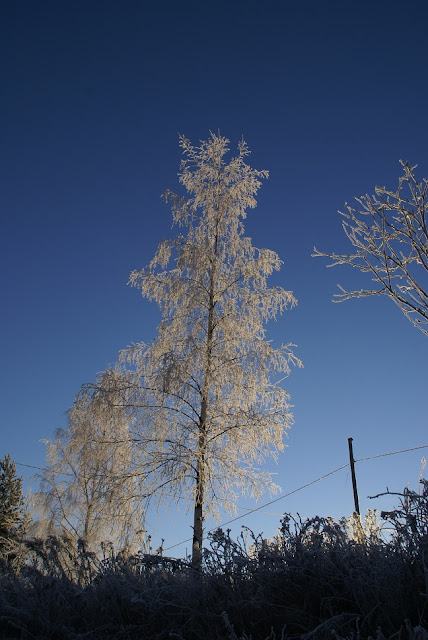 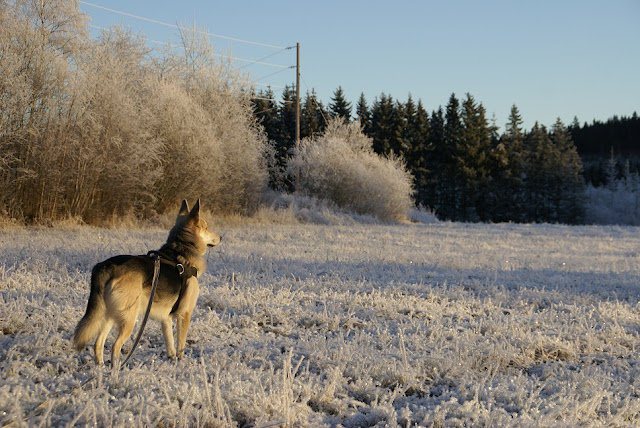 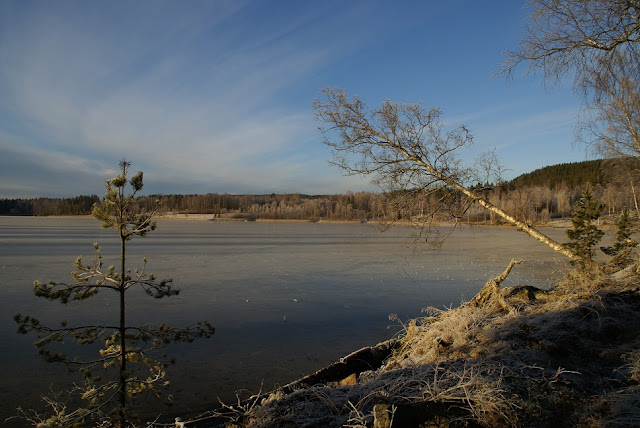 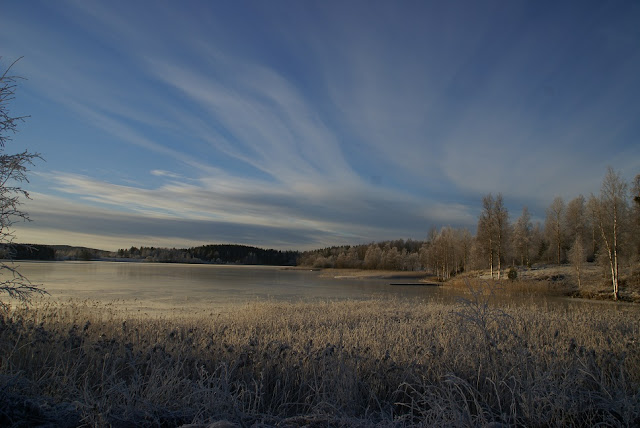 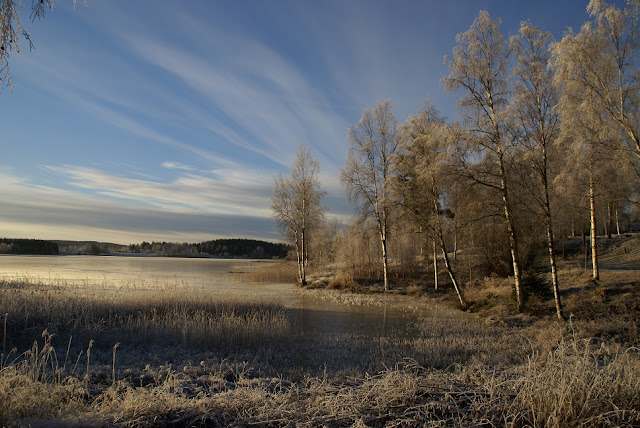 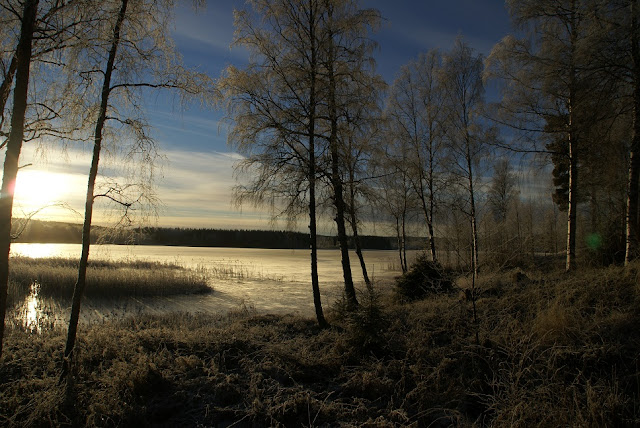 The sudden arrival of frost once again causes the lake to freeze up again and the ice thickens quickly.
The building tension in the ice causes it to groan, moan and creak. Amazingly weird sounds echo and boom through the valley.

The cold is driving the birds from the forests to the houses, where many feed them. And with them of course come the hunters. As I was watching a group of small birds through the kitchen window, scurrying through the garden, they vanished all of a sudden and a grey shadow swooped in. It perched on a birch branch, right in front of the window! It remained there for a little while, looking around, before lifting off again, turning back and catching the sun's light on its belly, flashing its underside at me; bright grey/creamy with light brown patches at the chest. A young peregrine falcon!
I am always excited to see one, but then again I am excited when I see a moose... or a lynx, like a few weeks ago. Or a snow hare, which I never had seen before, on the evening when I came back from the visit at Wetterlings. Bright white in a dark forest.

The "house" is decorated for the holiday season. I find myself less and less wanting to put up with the whole decorational fuss. I could do without the tree and we used to decorate the entire house with all kinds of stuff. These days it is limited to the livingroom and even that is a lot less elaborate. 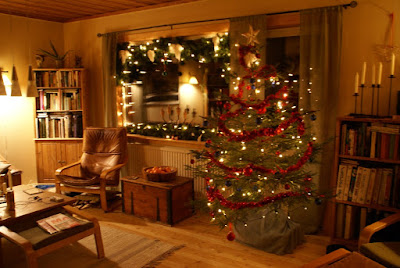 But before all that came to pass I harvested the last of our own grown vegetables from the garden; kale. I chopped it up, the frost still attached to its leaves before preparing it in the traditional Dutch way by cooking it together with potatoes and then mash and blend it, when all is cooked. A dash of vinegar, some lumps of butter, a little extra salt and pepper, some chilipowder (how could I do without?) and some nutmeg. Accompanied by grilled sausage and a lot of bacon, this makes for a real, hearty wintermeal!

And the night was quite special too. As usual I went for a late evening walk with Rex and, due to his behaviour, I was more focussed on him than on the surrounding area. Until I reached the road. I looked up and the sky was lit up by green bands and streaks of light. The aurora. So I ran back home, told my wife to get dressed again, as she was getting ready to go to bed, and to take the camera. We rushed out, dog all confused and we watched..... The freezing cold, silence, darkness without artificial light, the sky above the hills pulsating with green light, loads of shooting stars and the lake ice next to us booming and groaning. The experience is hard to describe. We came home just before midnight, hoping the pictures we tried to take worked.
Not really, but that doesn't really matter. 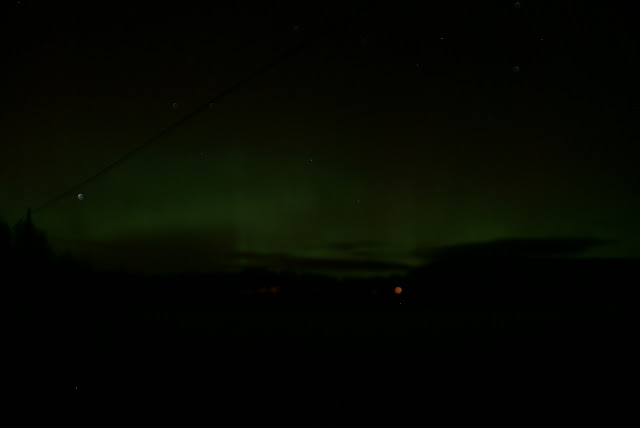 For now we enjoy it all, for in a few days it is forecast to come to an end again; thaw and rain are coming our way and that should be "fun" on a solidly frozen surface.
We might just end up with a Dutch christmas after all; dull, grey, wet and warm....


Our garden this morning 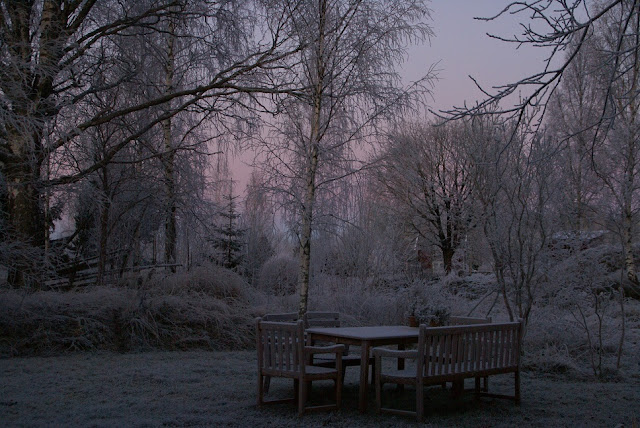