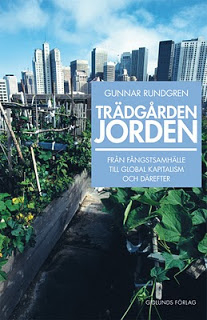 I recently read "Trägården jorden" by Gunnar Rundgren and this book did make quite an impression.
It deals with subjects like capitalism, where it originates from, how it came to be and how it ended up being what it is today. I read the Swedish version and for me as a non-Swede that was at times hard to follow. The language is not your everyday common Swedish, it is academic at times and a bit dry.
I find it hard to describe, so I copied a piece of text  I found on the author's (?) own blog;
Garden Earth
– from hunter and gatherers to global capitalism and thereafter
There is no land left to settle, the last frontier we have left to civilize is ourselves. (Jewel)

Garden Earth from Hunter and Gatherer to Global Capitalism and Thereafter stands out from the current flow of books on climate change, the financial crisis, globalization, the food and agriculture crisis or peak-oil. It avoids the trap of using just one lens to make sense of the world. Instead, it looks at the present day problems from a historical, social, economic and ecological perspective.
Humankind has colonized most parts of the globe and its ecological footprint is already far too big. The era of colonization, driven by profit-seeking and fossil fuel, is over. The capitalist economy and its associated values were both results and drivers of this restless conquest. Now it shows diminishing returns and we need new ideas and new means to continue human progress. Garden Earth provides that.
In Sweden, Garden Earth (Trädgården Jorden) was published by Gidlunds April 2010. The book has got good reviews and Gunnar has been invited to present his book at universities and various public fora. It has also got distribution support for “excellent and high-quality literature” from the Swedish Council of Culture, which means that the book was freely distributed to 300 public libraries. The book is also published in Japan by Dayosha.

The English version is now available. It is an extensive re-work of the Swedish version. The analysis is sharper, the narrative clearer. Examples have been adapted to an international audience. The last part, pointing to the future, has been expanded. 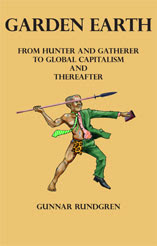 I wholeheartedly recommend this book to anyone interested in and caring for our world, the economical, environmental and political issues we face today. We need to find solutions and we needed to find them yesterday...
Where have we come from, where are we today and above all.... where are we going to??

Email ThisBlogThis!Share to TwitterShare to FacebookShare to Pinterest
Etiketter: Bookreviews, Food for thought