Well, you know by now I really like old stuff and I like it even more if I can still use it. It often needs attention and some work, but that in itself often is a goal. Just fixing old things is very educational and rewarding...

So...
I have accumulated a fair amount of old and even antique wooden skis with the intention of getting them ready for use again.
Some of those really show signs of prolonged and improper storage and will require a good deal more than just cleaning up and tarring them, yet I started out with these 2 basic tasks.
One pair I have, is a pair of old Swedish army skis, the predecessors of the so-called "vita blixten" (white lightning). Mine are dated 1941 and are produced by AB Tobo skidfabrik. The wood is pretty scratched and banged up and the bindings..... The metal parts are completely rusted and the leather is ruined and in pieces. It might still be used, but no guarantees for how long. They inadvertently will need replacing. The other ones are brandless and have spring-bindings. These are shorter and narrower than the army skis. I guess the latter ones are intended for more universal use. 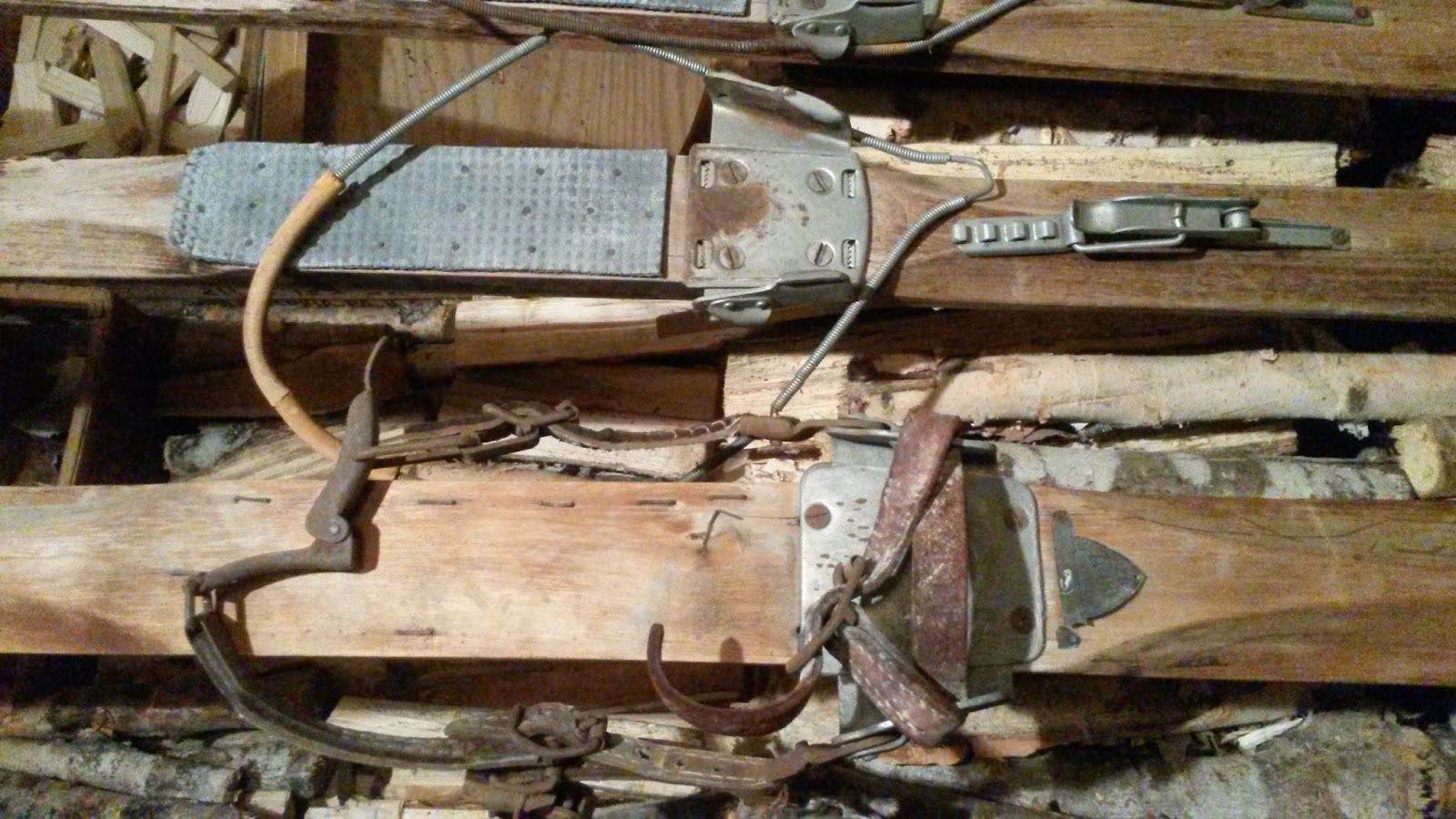 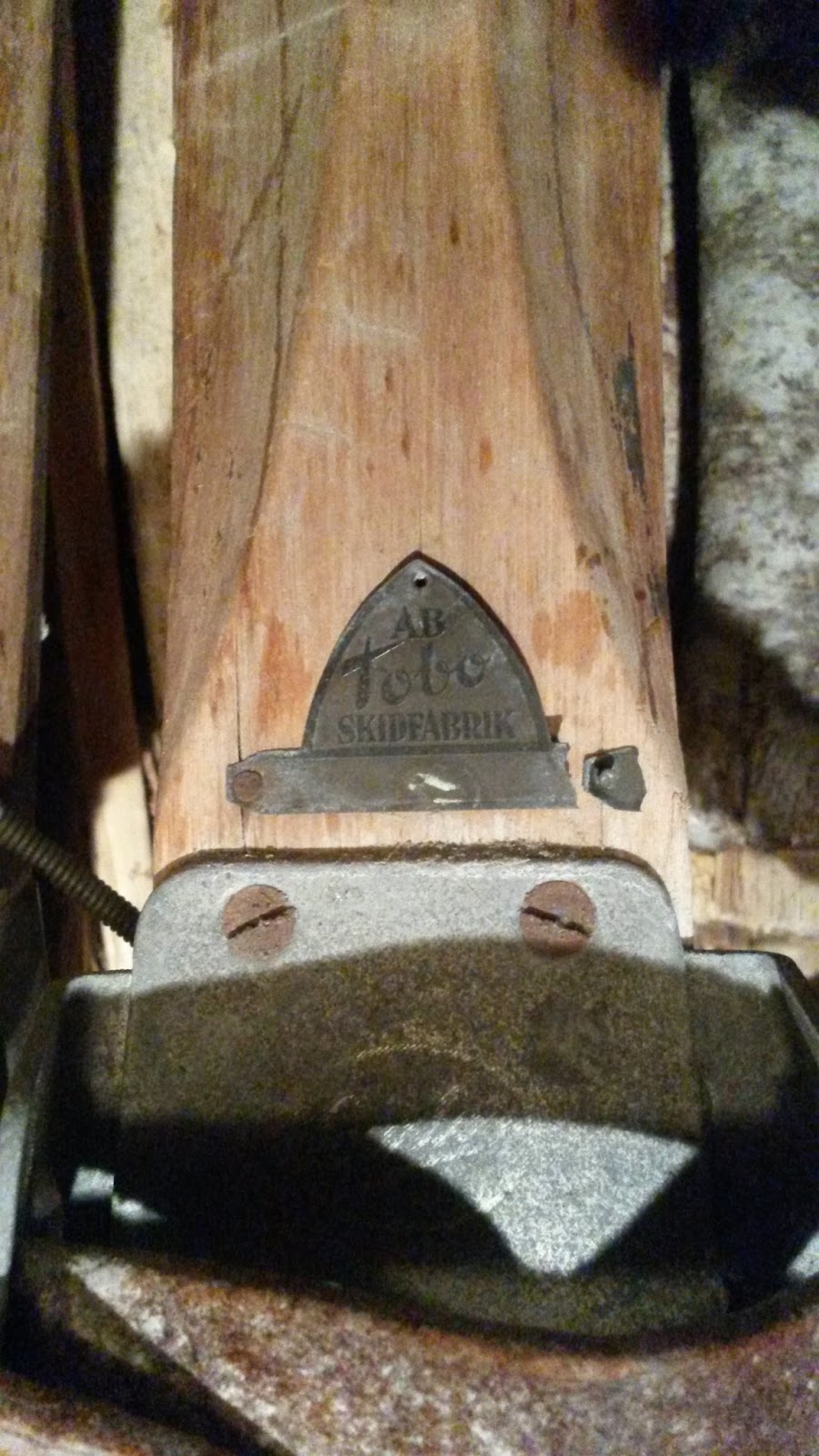 I have been doing some internet reading about how to tar this kind of wooden skis and one source, utsidan.se, mentioned a procedure that made sense, so I followed that. It was described as follows: Apply the tar to the ski, heat it, let it cool down and settle, then reheat it and wipe off all excess. And that is basically what I did. Sounds simple and it actually is. Although applying this technique in the field over an open fire..... might prove tricky and messy. 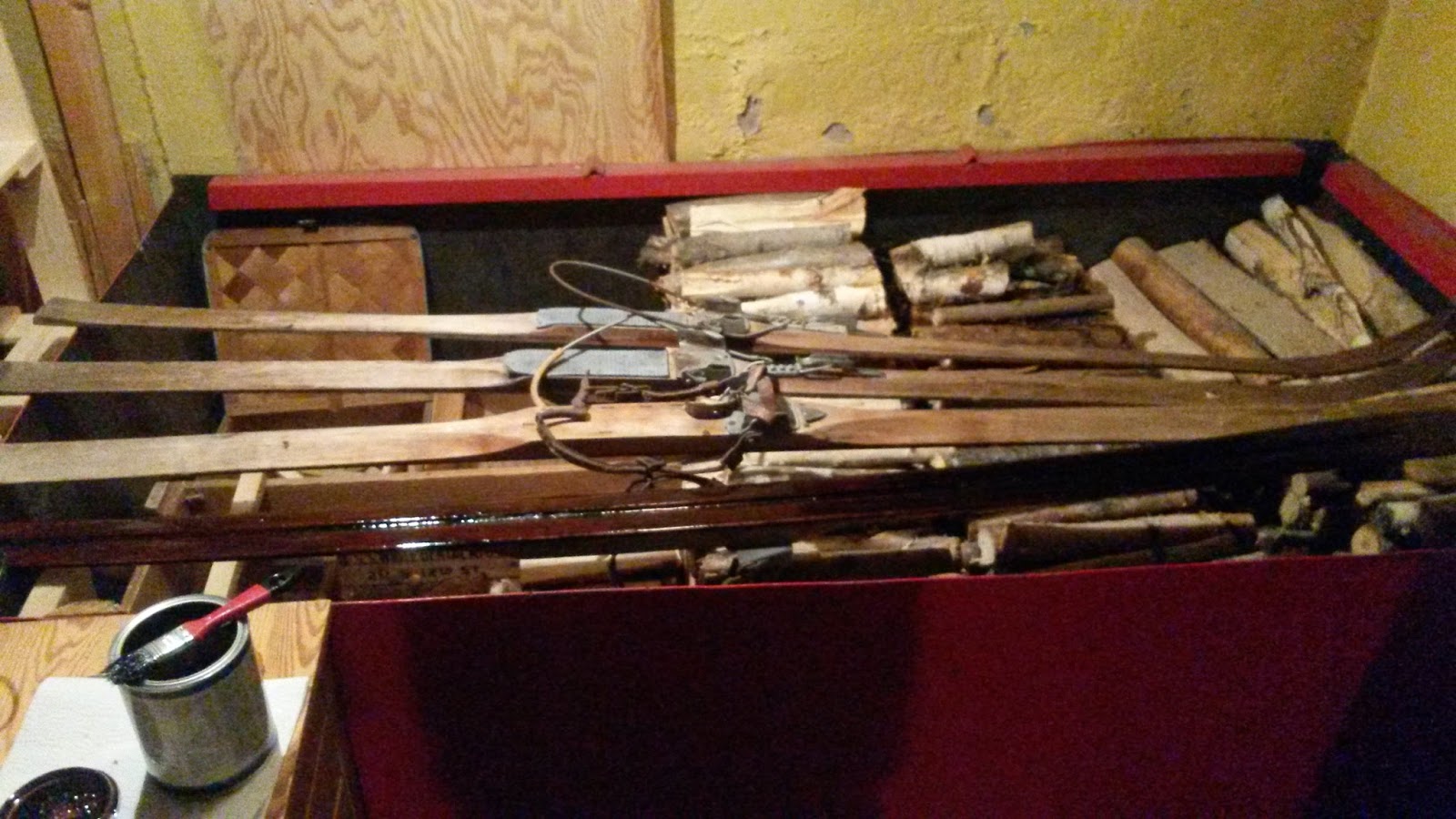 Before applying the tar with a brush I put it on top of the heater before I fired that one up. That way the tar would be warmed up slightly, making it run easier. Then I applied a coat of tar to the bottom of the ski, spreading it evenly in a not too thin coat. The military skis still had the remains of previous, tick layers, but I figured they might come off or blend in, once I started heating it. On the other skis the tar often got drawn into the wood right away. I let the tar sit for a while, before reaching for the heatgun (one of these things you use for paintstripping) and I started heating up the tar. I heated it long enough, so it would start to bubble and you could watch the tar flowing over the surface and soak into the wood. I left it overnight like that, since it was dinnertime and afterwards I did not want to proceed. It was smelly enough as it was and I did not want to make it worse, before everyone went to bed. This procedure is better done in a shed or outside, instead of the basement, but one has to work with/in what one has. Make sure your area is well ventilated! I was working next to an open window and still the vapours got to me. I don't mind the tar smell, but others in the house were less enthusiastic about it.

The next day I continued with the heatgun. Again heating the tar untill it bubbled and flowed and then wiping of and out the excess tar. Small steps, about 10cm each and wipe off the tar while it is still hot. The procedure I followed clearly stated that the bottom should be dark brown and not black, meaning heating it up, not scorching! During this final heating- and wiping procedure I was able to remove all the old, chunky tar leftovers and got a nice, even and smooth finish. Once I finished one ski I buffed/rubbed the surface one final time with the cloth.
This work is messy and sticky, so I strongly suggest wearing a pair of (household)gloves.

The post on the utsidan-forum;
http://www.utsidan.se
and another one with pictures;
http://www.tegsnas.se
Upplagd av Ron kl. 9:04 PM

Email ThisBlogThis!Share to TwitterShare to FacebookShare to Pinterest
Etiketter: DIY or Do It Yourself