Living with the seasons

Today was one of the rare occasions that I took the car and went out. I am not much of a car driver, not hopeless but not good either. I do not really feel at ease behind the steering wheel. Never can relax completely, because it doesn't come naturally to me.... I even don't like cars in general. Nothing but a metalbox that transports me from A to B relatively quickly and in comfort. A Ferrari or a Dacia... all the same to me, except the first one is ridiculously overprised and utterly useless... But I digress...

Driving through the forest on my way to the "big city" I couldn't help but thinking about winter, the cold and snow and how it affects people in western society. Looking at the continuously falling snow  I thought about the comments we get from our contacts back in Holland and couldn't help but grin. Many of them hate it, despise it, wish it was summer all year round. Dutch official life grinds to a halt if only a few centimeters of the white stuff are on the ground. Social services collapse in the event of snow; trains and busses come to a stand still, highways become unusable and people are hesitant to leave the house, because "it is cold, slippery and dangerous out there!" And here I was, doing 50-60km an hour through a few inches of snow! The thought of doing that in that little country by the north sea made me laugh out loud. One sure learns to live with the seasons fast if one has too!
OK, I admit.... there is very little traffic here... apart from a large tractor plowing snow and 4 large trucks transporting the logs I showed in the previous post... Exciting when one meets one of those of these roads... And yes, there are less pedestrians out here.... But we got moose, fox, deer, grouse etc! Not that I did see any though.
But these are only everywinterday, practical issues. How about the human body and mind? What would the absence of winter do to us mentally and physically? After all we only evolved over tens of thousands of years, including a handfull of nippy days, to what we have become now. (If you want to call it evolved, but that's an entirely different discussion). People adapt to their circumstances quickly. Looking at myself, since I live here I have come to see the concept of cold on a different scale then what I was used to in Holland. There -10C meant almost dying of cold and utter misery, here it barely means a thing, except a fresh breath of air.
The human as a whole needs the seasons and their change to thrive. We need to feel the frantic fluttering in spring, the maturing in summer, the ageing in autumn and the dying in winter in order to start all over again.
We need that fresh surge of energy to kickstart our mind and body again, we need to slow down and finish what we started, we need to reap the fruits of our efforts and we need to come to a stop and rest...
This simple, everyday drive to the library made me think about that. It being a longer than 30 minute, solo, without radio-drive gave my mind a bit of room to wonder. 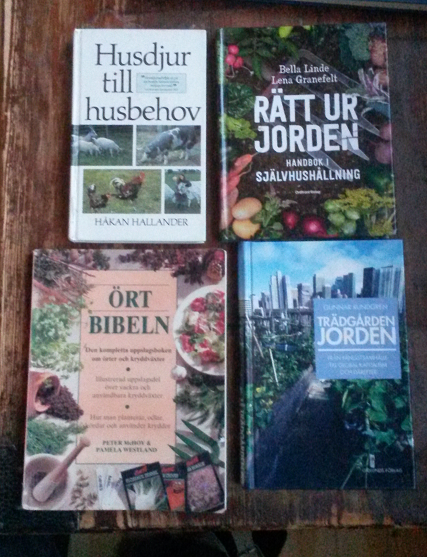 Which brings me to the next subject of this post; books!
I have been reading quite a lot lately and it was time for a resupply, so..... The pile of books I got today was about half regarding the subjects I address here and half the subjects I address on my other blog, which has very little to do with what I do here. It's all about plastics, resins, paints, glues and war... Remnants of a previous life..
Other subjects are mainly wolvers and dogs.
The lady in the library I talked to, while she was helping me, told me that there is a strong growth in the loaning out of books on self sufficiency, permaculture, growing own's own food etc. She said books on these subjects are growing increasingly popular and on a good number of them there are waiting lists, resulting in shorter loanperiods. 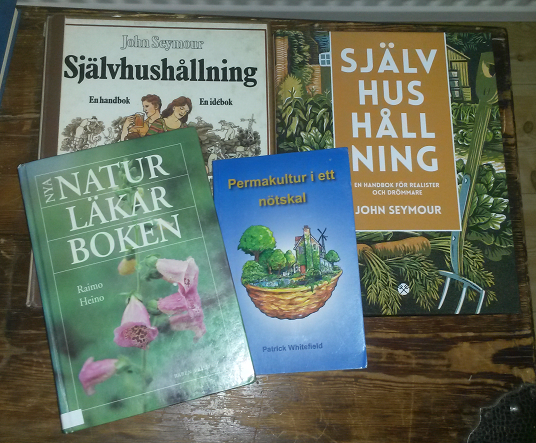 Apparently something is going on here. And that is good news. Sounds like people are waking up more and more... And the more wake up, the more things will inevitably change. And there'äs another good thing about it. When that change comes and becomes all enveloping it just might not be that horrendous, catastrophic collapse everyone thinks it will be. Maybe, just maybe.... if the numbers of changers has frown significantly large by that time, there will be a less violent and sudden shift, although I still think that the final downfall will occur in flames and suffering. This system will not roll over and play dead. This dragon has to be slaughtered and many a brave knight will fall in battle. Yet history shows that it is often the numbers of humble footsoldiers that bring about victory and not the knight in shining armour. His main purpose is to lead and draw fire....

About some of the books themselves; I got me a copy of the old self sufficiency book by John Seymour and a new version. Seymour seems to be something like the godfather of self sufficiency so I needed to know more about him and the books. At first glance they appear to be quite different from one another.
Trägården Jorden or Garden Earth by Gunnar Rundgren is in a league of its own and will as such get a separate post. A very significant book I'd say.
Upplagd av Ron kl. 4:44 PM