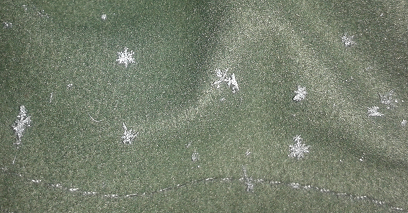 Have you ever watched snowflakes up close?
These were on my jacket.... Amazing pieces of Nature's art!! 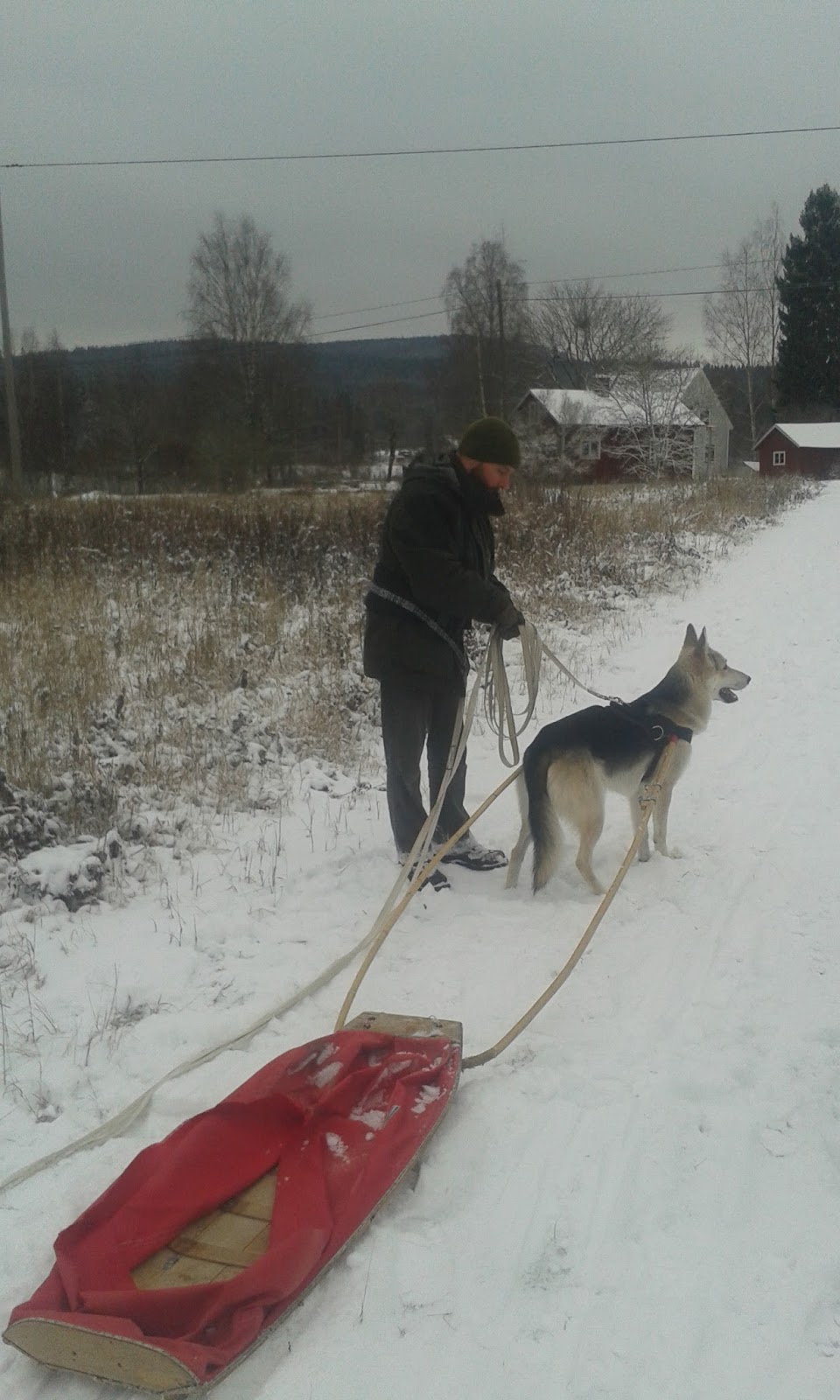 But let me start at the beginning. The winter weather has been quite.... inconsistent since christmas, with far too mild weather and occasional cold snaps. The christmas holiday end gave a bit of snow, so we utilised that in order to have a little experiment; getting Rex used to pulling a pulk! That went actually quite well. So well that we even put our youngest one into the pulk and let Rex pull that. And that was right up to the limit of his abilities. Elsa weighing in at a bit more than 20kg and the sled's weight added to that about equalled Rex' own weight. And he struggled with moving that.  But on the whole he did well for a first time. At first he was scared out of his wits by that strange thing behind him and the fastenings were not exactly comforting either! He ended up getting twisted up and that made things even worse. Not until we got him untangled and my wife started to go in front of him and leading him, he got the hang of it. And after a while he trotted along and we even dared to make a few turns. After about half an hour we added Elsa to the sled and we tried a more even surface than the frozen fields. Both he and I struggled to maintain a foothold on the lake ice however, it's surface being smooth as a mirror and covered in a powdery snow. And we quickly called it a day. 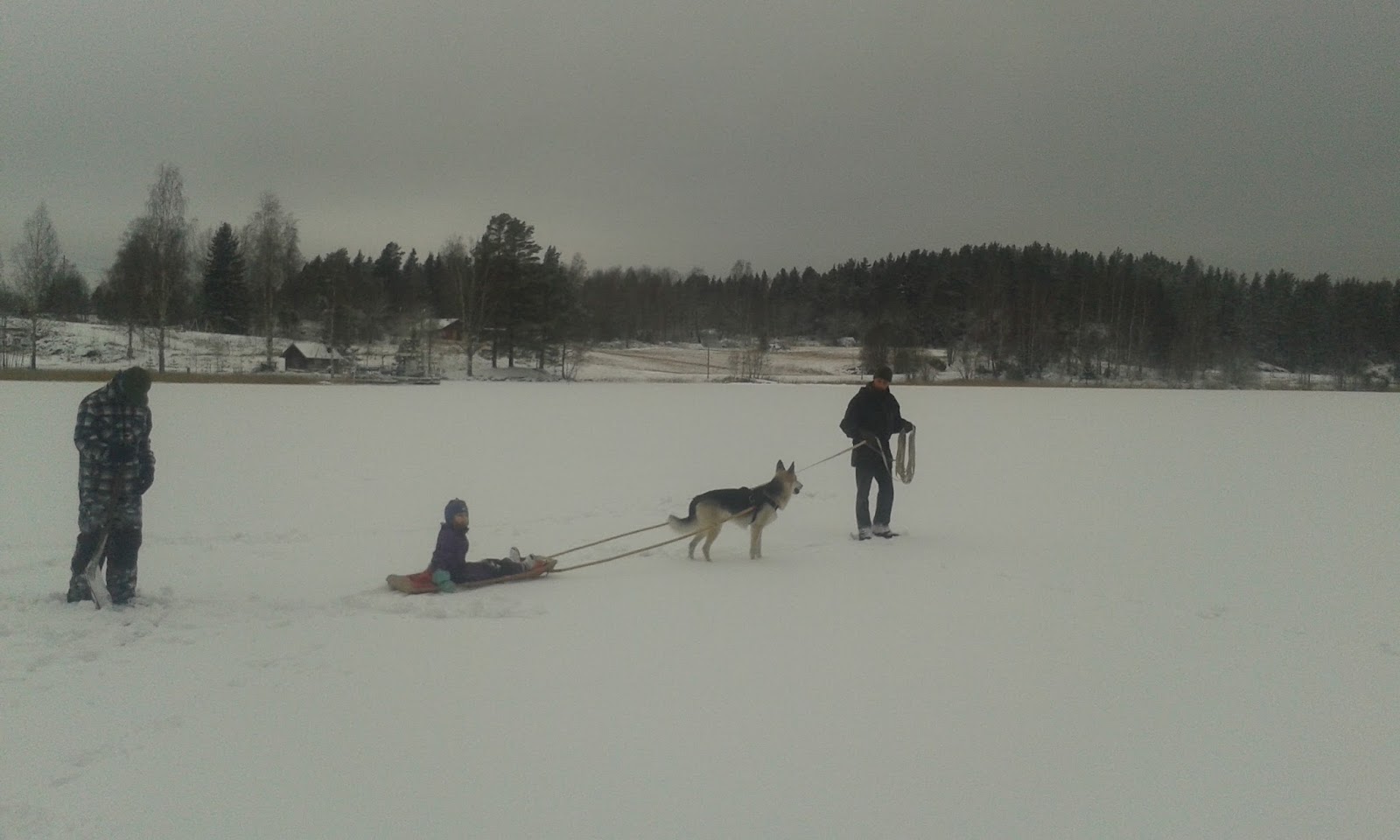 I really need to fix the poles of the sled, because they were draw in, when Rex started to pull and poked into his sides. I need to add a loop on the frontend tops and a bracer in the middle. And that was pretty much it really, because the day after we were hit by another warm spell and everything just melted away quickly, only to refreeze at night.

And on the afternoon of last saturday Kung Bore, a.k.a. Jack Frost, showed his teeth once more, dumping a lot of snow on us and treating us to a blizzard.... Well, not a full scale one, but with strong eastern winds and a near whiteout. The horizontal flying snow was fine and sandlike, making going out to walk the dog an unpleasant affair. Turns out it was a stormdepression called "Egon"....

Speaking of teeth.... Just before I was heading out with the dog on saturday afternoon I received a phonecall from Esbjörn, the man with the greenhouses, that he had spotted a large wolf near his house and that he had chased that one away by firing 2 warning shots. So there really is a wolf strolling around the village and we assume it indeed is a male, establishing a territory here. Bad choice on his behalf and I am afraid he will pay dearly for that..... with the ultimate price...

By the time we went out again with Rex there was at least 20cm of snow and plenty of snowdrifts. The world had become a strange place. Its borders and lines had been altered or had been erased all together. A strange sensation, wallowing through it in the dark, no longer seeing where road ended and field began. Rex thought it was a lot of fun, running around, sniffing in it and consequently blowing his nose. Sometimes his whole head would disappear in the snow.

This morning we woke up to a winter wonderland; everything covered in a thick white layer... and I was to remove a part of that by hand from the path, stairs and parkingarea. Who needs a gym??