Happy birthday to me....

We've had a lot of snow lately and I wanted to spend sometime outside. Having fun in the snow, trying my christmas presents, inhaling fresh air, soaking up some sun and generally just spend some time alone with my better half.
So I asked the mss. to join me. Hence the "numerous" images of me...

But the day before we went for a longer walk with the dog too, plowing through the snow, while more was still coming down. It was fun stomping through knee deep snow and a few interesting observations were made.
1) Rex goes nuts in snow.... He runs, jumps, sniffs, burrows and does all over again. A seemingly endless supply of energy and the longer he's out, the more it seems to become!
2) When it snows, keep your anoraks hood up. It fills up with snow and that is not fun, when taking off the anorak.
3) Stomping through such deep snow is hard work. Dress relatively light for the occasion! The mss. was wearing a fleece vest, a coat, winter pants, and fleece gloves, hat and acrylic shawl, all in synthetics. She was sweating heavily. I was wearing wool pants, a cotton longsleeve, a wool sweater and my canvas anorak. The sheepskin Finnish army hat on my noggin. I was warm, but did not sweat.
I guess the issue here, was breathability. Both were warm, I remained dry.

Just a few reminders there... 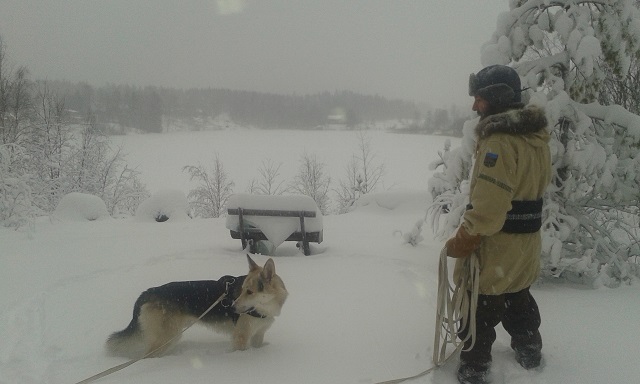 And today we actually went out on a longer hike, walk, whatever you want to call it.
After the kids had gone to school, we collected our things, filled a thermos with coffee and one with water and started moving. 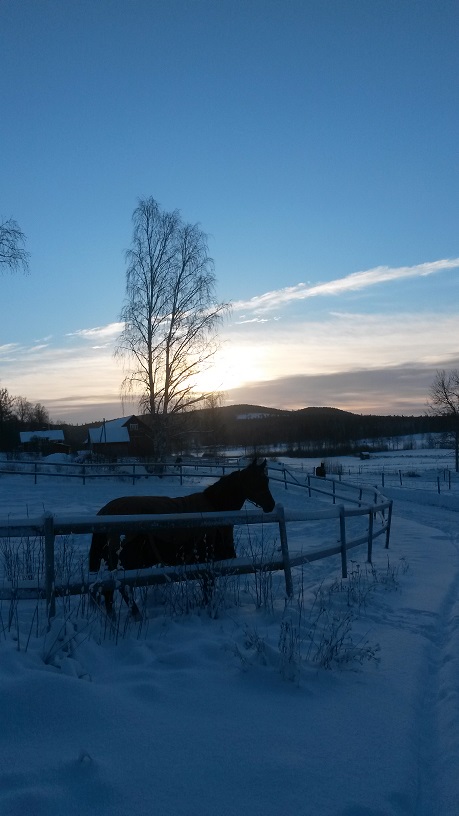 We had a wonderful time, despite the fact that walking through a thick layer of powdery snow is anything but easy, especially for a few hours. The initial plan was to bring the pulka as well, but we did not. In hindsight might that have been more comfortable, and we might have worn out Rex some more, but that would have meant that I did not get to properly test the German/Swedish backpack alliance.
My wife took the dog, I hauled the backpack.... and struggled to keep up. I had packed the backpack with some real weight, some 15kg. I wanted to know if it did perform as I hoped it would. Pushing it a little just makes things more clear. Any hidden drawbacks would show... as would any lack of physical fitness. And I must admit, much to my surprise, that there were little problems with either!
The backpack carries very comfortably, feels well balanced and at no point gave any trouble, not even when I misstepped. I remember the old M39 immediately wanting to pull me down, and occasionally succeeding, yet this construction remained in place, close to my back and not moving in the direction of the potential fall. I guess I finally did it; adapted a pack for me that is entirely my own! Fits like a glove.
The main drawback was my anorak. More specifically the buttons of the shoulderflappythingies. You know, the flaps that hold rankinsignia. These will come off a.s.a.p. 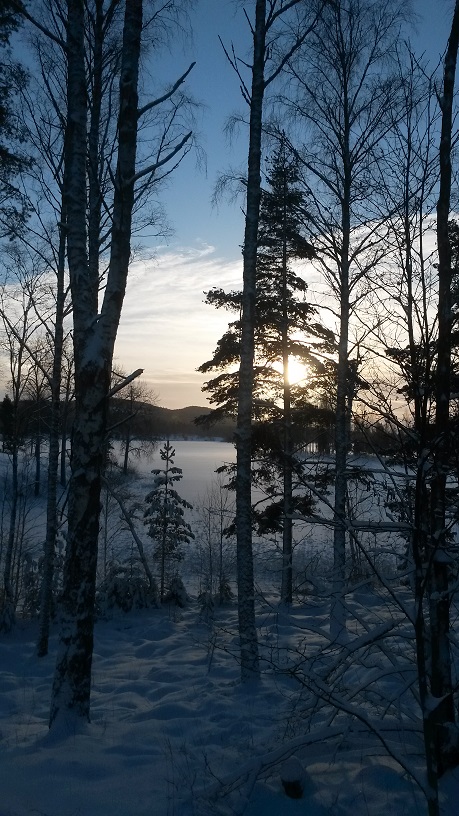 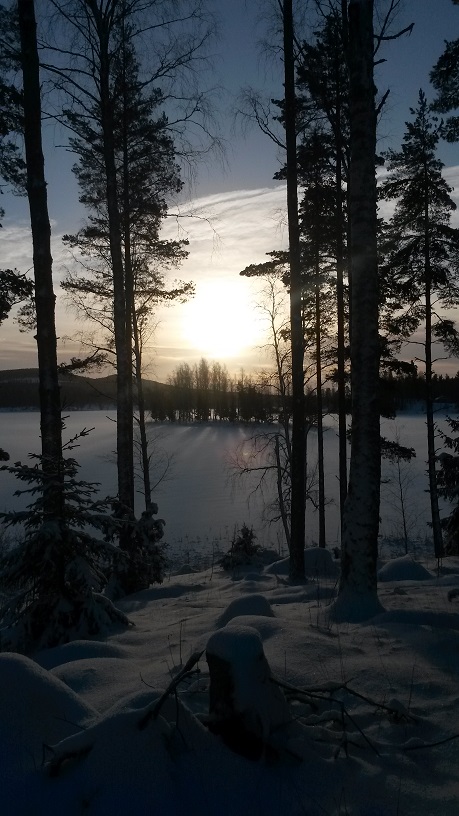 The weather played along nicely. At first it wasn't as sunny as predicted, but that turned out to be a positive thing. It did not get warm that fast and the temperatures remained below zero for longer. It also created the most amazing, fairytale-like light which, combined with the snow, sometimes was pure magic. Next to impossible to capture and we stood still regularly, often..... And  we gazed upon the landscape and the valley in which we live.... much to the obvious discomfort of Rex, who just wanted to keep on going. He ran from left to right, sniffing here, lifting his leg there, before burying his head up to his shoulders in the now on the next spot. Signs of wildlife were prolific today. Right at the beginning we came across some big mooseprints, which crossed the path, generally following its direction, but often veering off to browse. There were also many prints of deer, fox and hare. The local fauna had been busy! All of these prints were fresh too, so apparently we had missed rushhour, although I have the sneaking suspicion that many an animal was in the treeline, just out of sight. 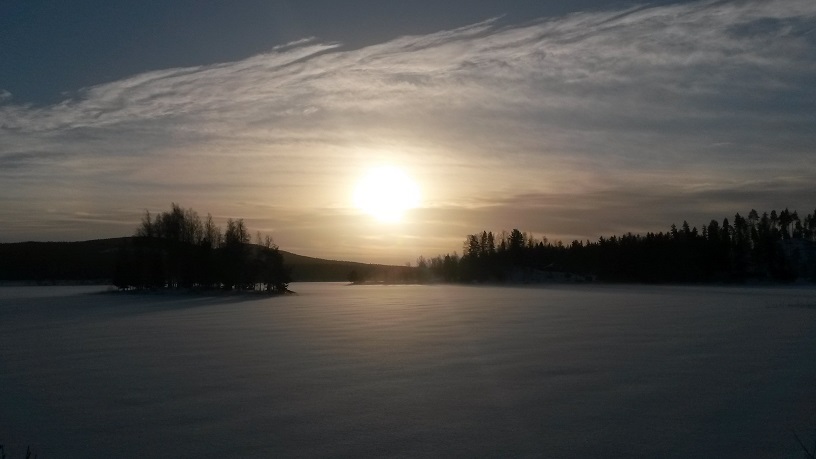 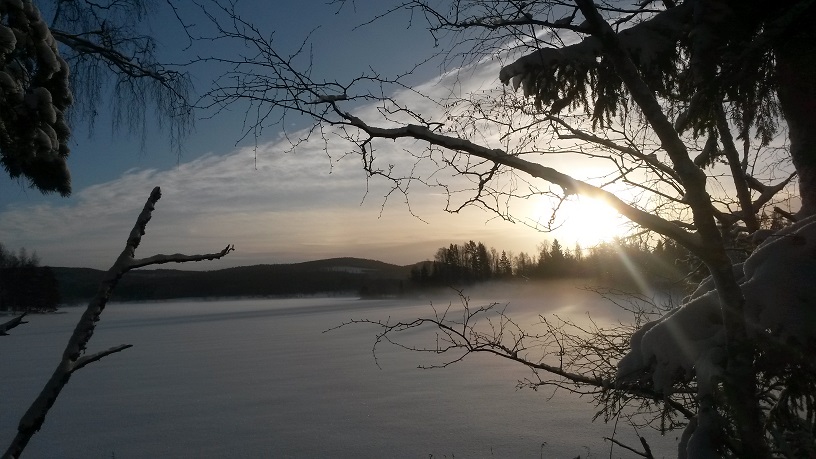 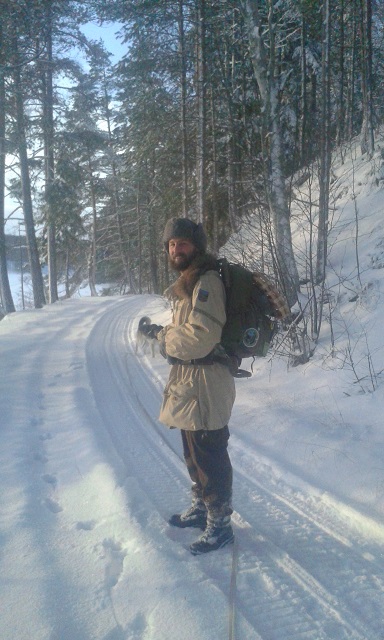 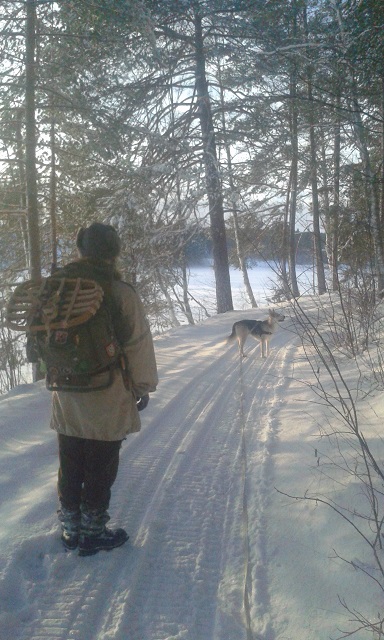 We took a coffeebreak at the crossroads I showed previously. It was an open space and now the sun shone brightly. While my wife made arrangements for a very necessary sanitational action, I strapped on christmaspresent nr.1; a pair of old snowshoes. These are a bambooframe and a sort of woven webbing lacing. I think they are old armyissue.... What isn't with me? 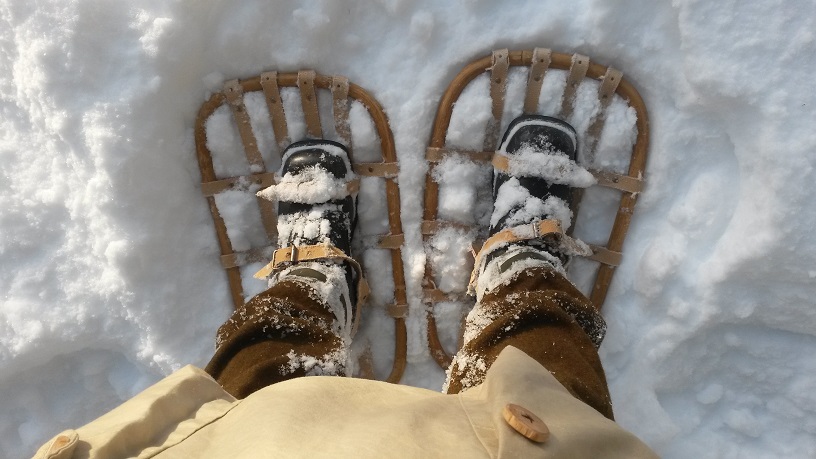 Well, actually there were 2 pairs and I bought them after I sold off my 4 military wool blankets. I did sell off much more of my stuff (And there's more on the list. Feels good to create some room, really) and I did give myself a second present; a set of US army goggles of pre-1945 vintage. I just like the style and would have loved to have some of those German Gebirgsjäger goggles, but these were much cheaper... I mean real cheap and they just as well serve their purpose; prevent snowblindness. 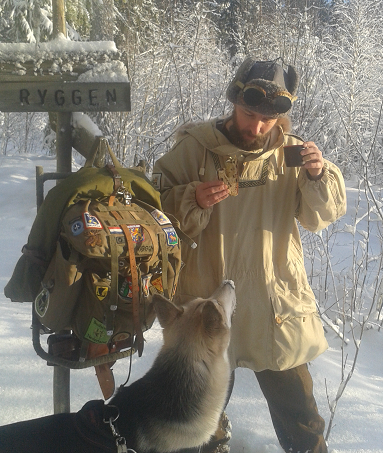 After we were done we went for the coffee... and "birthdaycake"! Not really birthdaycake but a local delicacy from where we come from. It is called "kerststol" and is a loaf of bread, richly filled with raisins, dried fruit and almondpaste.
The top is sprinkled with powdered sugar. It is best when the slice is covered with a thick layer of real butter and washed down with hot coffee! Or so do I think
and since it was my birthday I got to choose.... No cake. We enjoyed food and drink and sunshine and I made a few rounds through the forest on my snowshoes. The straps are still stiff, so at first I buckled them up too loose. Felt like flapping around on those diver's flippers! I retied them and tried again. A lot better, but still felt like walking with duckfeet. It felt strange, but I could get used to it. In this loose, powdery snow the flotation was at least better then without, but not as good as I had thought. They did very well between the trees, when going over the undergrowth of blue- and lingonberry bushes and forest litter. Where I would previously sink away down to my knees or deeper, I now went down some 10-15cm, so there was a lot of improvement there. 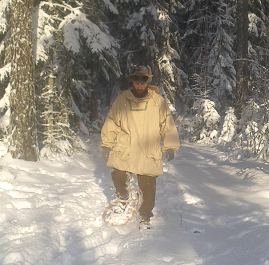 Of course did Rex also get a bite of the bread and we brought along a thermos with not too cold water and a bowl for him too. We really need to get him one of those foldable bowls.
After that I clowned around a little bit more on the snowshoes and noticed that the back would flip up and kick up a lot of snow, which would then cling to the back of my legs. I did not like that at all, but when I loosened the buckle of the snowshoes I noticed why. The snow was wet. Temperatures had risen above freezing and the top layer was partially melting.
It was time to get a move on anyway. Rex was getting restless and we had cooled down as well, starting to feel a bit stiff. We had been hiking for about 2-2,5 hours after all.
So we packed everything up and moved on. I had brought along all the essentials for making fire like hatchet, saw, firekit and even the Swedish messkit, but Rex just is too full of energy. He has not yet learned to control that and having him running around on a long leash with an open fire or boiling water around.....mmmm No good idea.
The returntrip was quite uneventful, apart from a rising annoyance with my wife, because Rex would not slow down or stop pulling. Her hands were hurting from holding him back. We were on a road with traffic now, so having the leash extended to its full length, 10 meters, is no good idea either.
I'll just leave you with the final images and be done with it. Thanks for looking!! 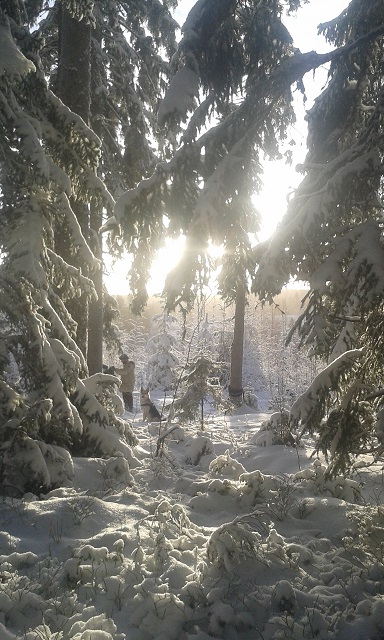 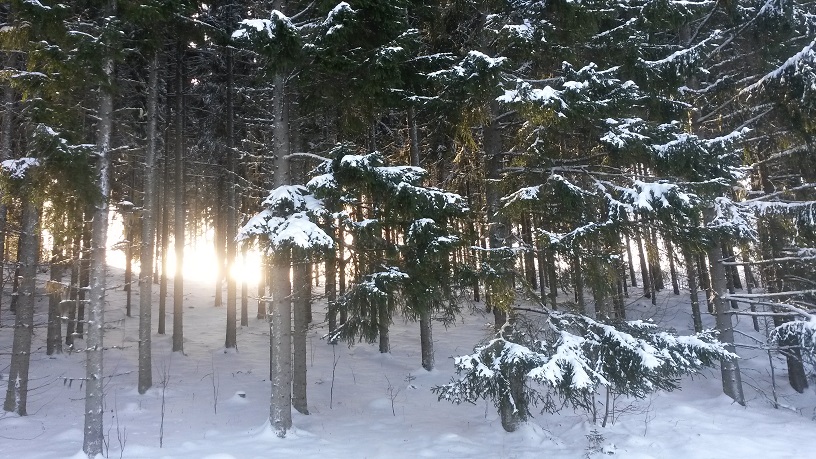 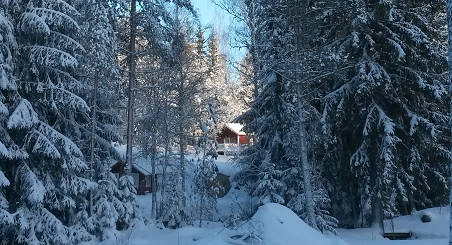 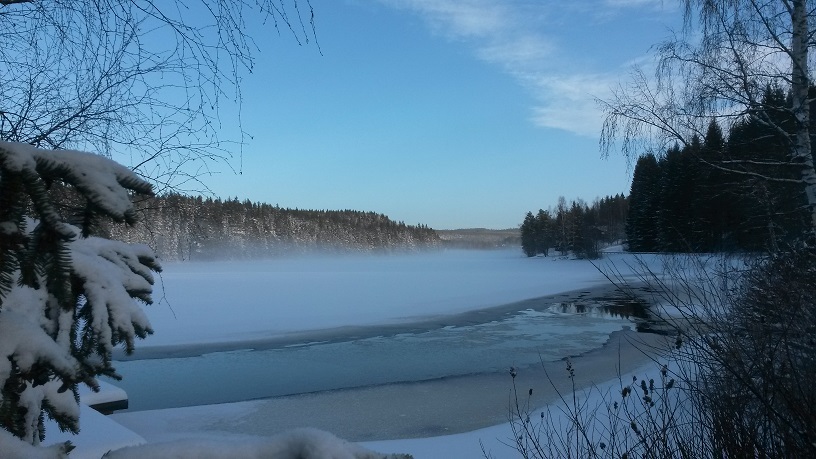 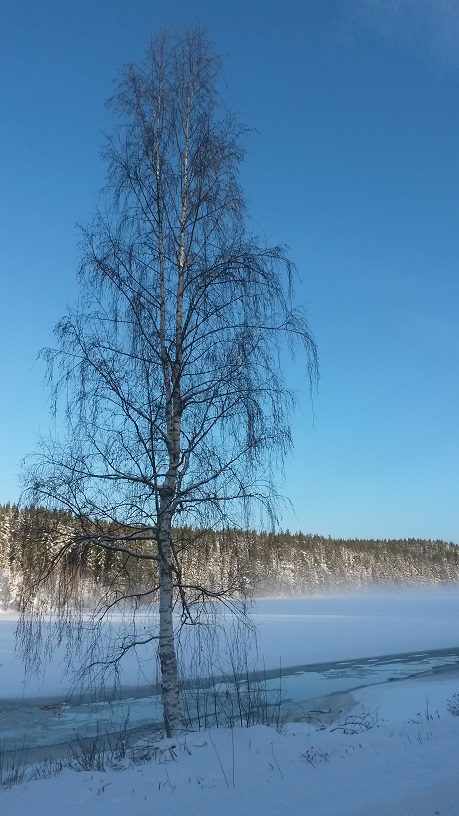