Slaughtering a rabbit - The complete NOOB-way. 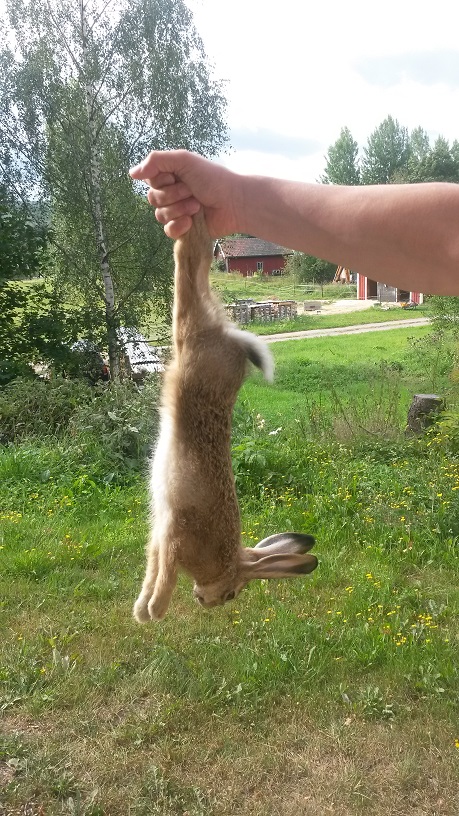 On friday morning we were treated to a very special gift by our red cat. Normally the and his buddy bring home mice, voles or an occasional bird, but not on friday..... 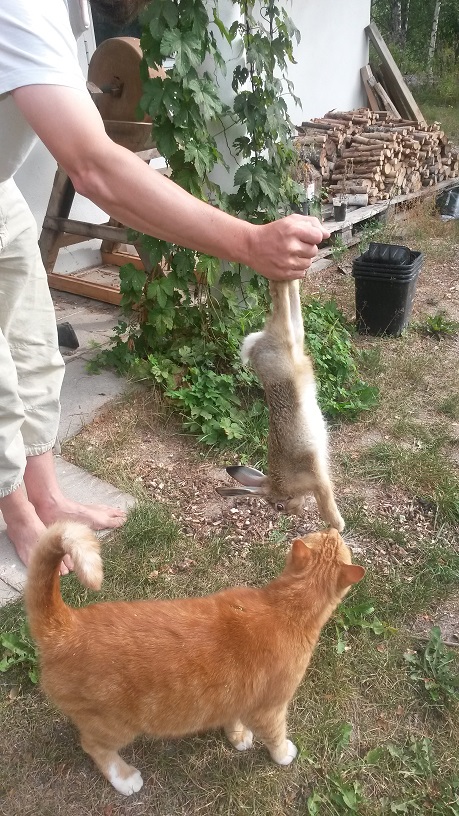 He dragged home one complete young rabbit! Don't know how he did it, but he dragged the animal through the catdoor into the hall. He barely fits through there himself! It looked like he had bitten through the animals throat and suffocated it, since there was the only wound I could find. And, like with the jay a while back, I took the opportunity to teach myself a lessen; how to slaughter a rabbit. Never did it before. Heck, never even witnessed it being done before!
All I had was a handfull of book- and internetwisdom. Time to get a bit of fieldpractice..... Unfortunately I could not get to it right away, due to some pressing "domestic tasks", so I hung the carcass in the (relatively) cool cellar untill the afternoon.


WARNING!
The following images could be described as "graphic"..... 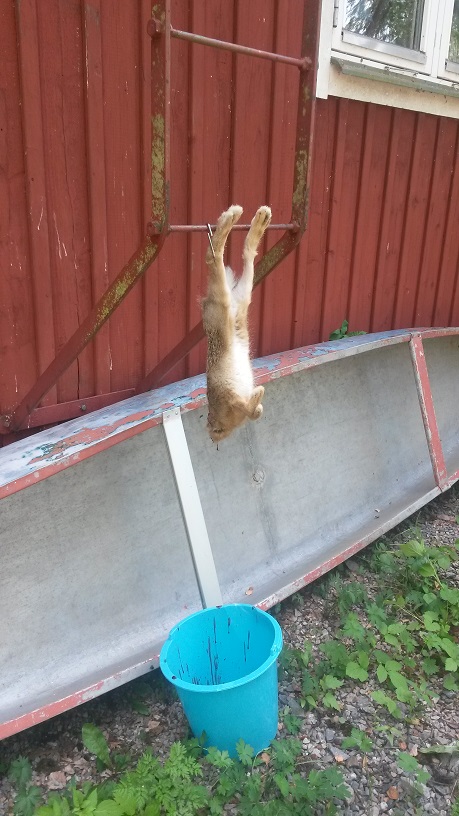 So..... here it goes.....
The first thing I did, was hang the animal upside down on the facade ladder so the blood could run down. I also removed the head, so the blood could drip away. It had already started to become thick and dark, so I left it like that for a while. 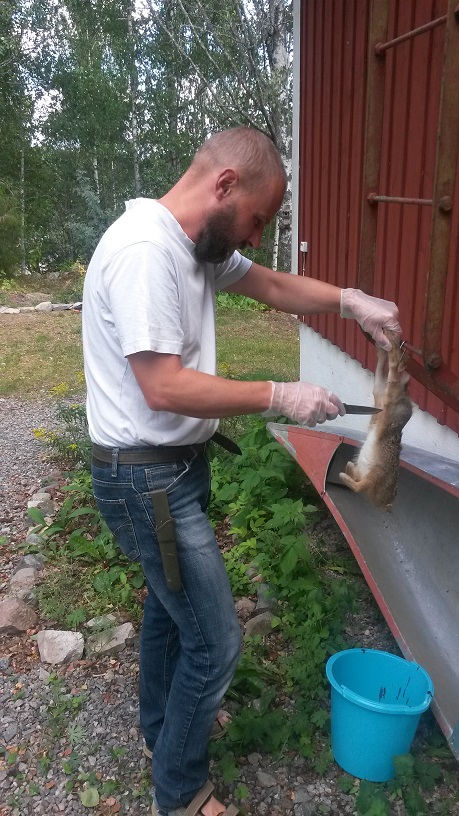 On youtube I saw someone use nails to hang the animal from, but did not see exactly how. I figured some hooks through the legs between sinew and bone would do the trick too. I had to hang it low, because I am not quite capable of reaching over my shoulders right now.

After half an hour I grabbed my knife, put on some whimpy latexgloves and got busy. I have to admit I thought it was no where near as easy as it looks, but I'll put that down to a total and utter lack of experience in this matter. 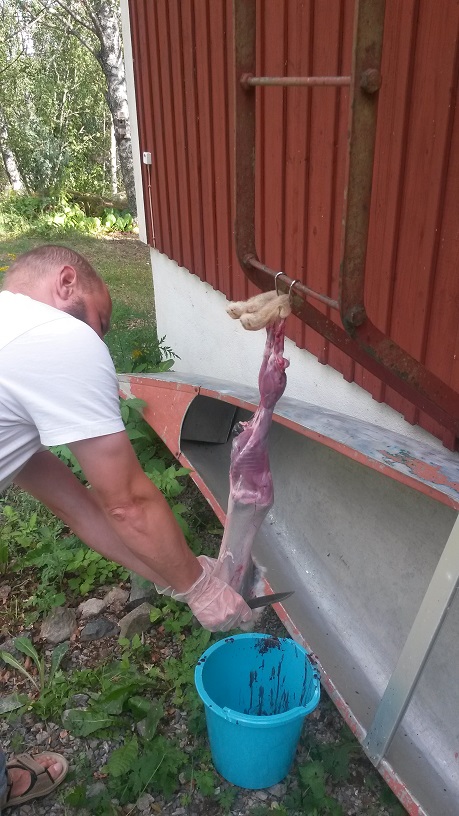 I saw the guy in the video make circular cuts in the hind legs and pull down the fur, exposing the meat and so did I.... Only I think I cut too deep or something, because when I tried removing the fur, the animal came of the hooks and landed in the below standing bucket with head and blood. What a mess!
I then continued opening the fur on the belly and trying the cut around the anus in order to pull off the skin in its total. The animal was not completely cooperative anymore due to rigor mortis, which had set it in. I was also surprised by the toughness of the membranes.... or I did not do a proper sharpening job on the knife. After some fiddling I was able to remove the skin, pulling it down in one piece. I did not save it this time.... I did study it though.. A funny thing, such a hide. Feels real slippery. I tried scraping off some of the membranes with my knife, but could not. They moved around with the scraping. I guess you'd have to fix it in one place in order to do it properly...

Maybe I made some wrong cuts, but while doing so, the intestines already came bulging out. so that was the next thing I did; removing them.
Now that proved to be even more tricky!! I knew I had to keep the intact in order to not spoil the flesh, but how to get them out? I always figured they were.... well... loose in some way. Wrong! It took quite some slicing and cutting and more fiddling to get them out. It was cool to see the organs in place and it was quite easy to identify what's what, but I did not know a (hare's) liver was that big!! I did manage to ruin the heart, though... I was wondering for a while how the get the final piece of in intestine before the anus out, but I figure I might as well pull it. I could easily identify it by the droppings that were in it. I pulled and behold! Out it came with no trouble at all... One thing I was uncertain of was the bladder and I still haven't quite figured that one out, so those with experience... Enlighten me, please! 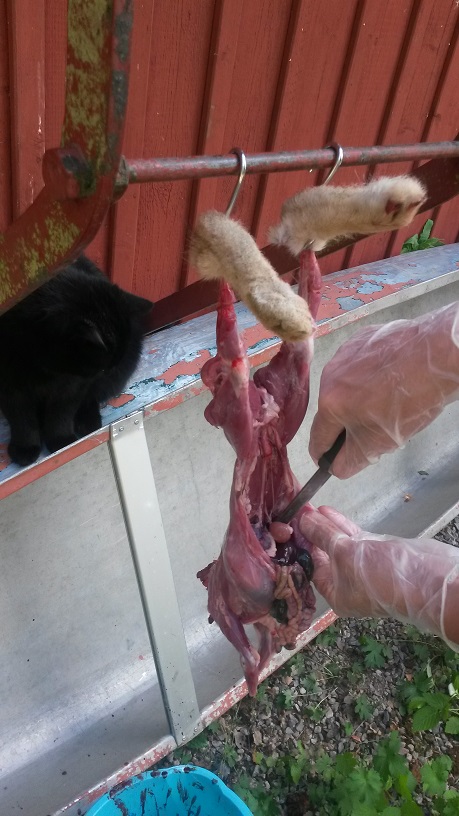 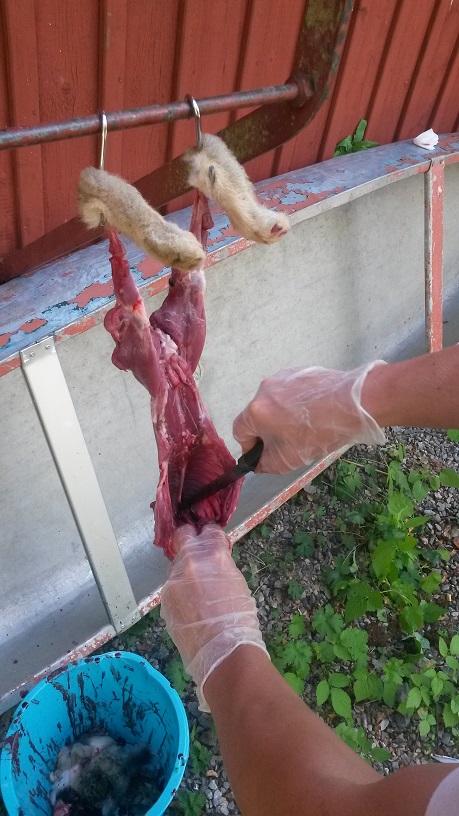 After I had cleaned the carcass I rinsed it and all the tools, before starting to cut off the flesh. That was meant for the cats, since they caught it and brought it home. Well, at least one of them. I also felt that they should have decent food, whenever possible (not that horrible, grain filled dry crap you buy at the store) and it appeared they appreciated my way of thinking!! 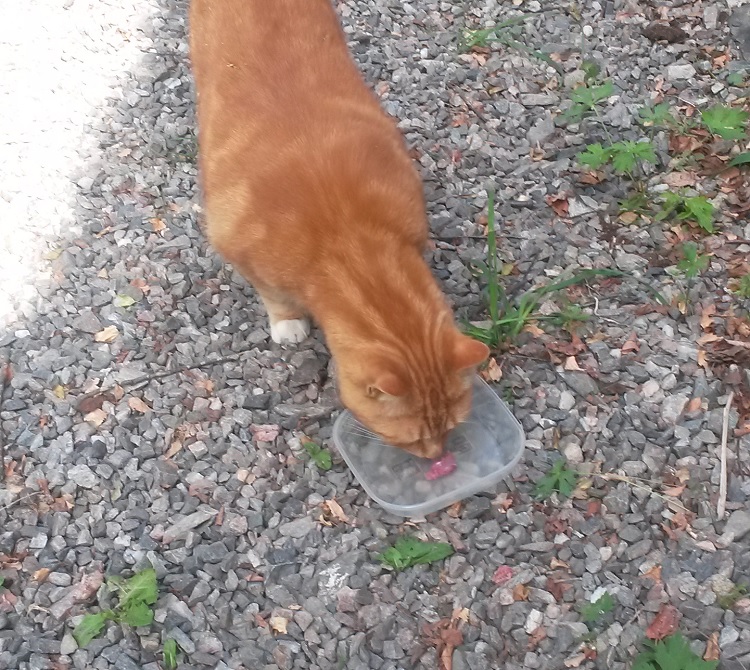 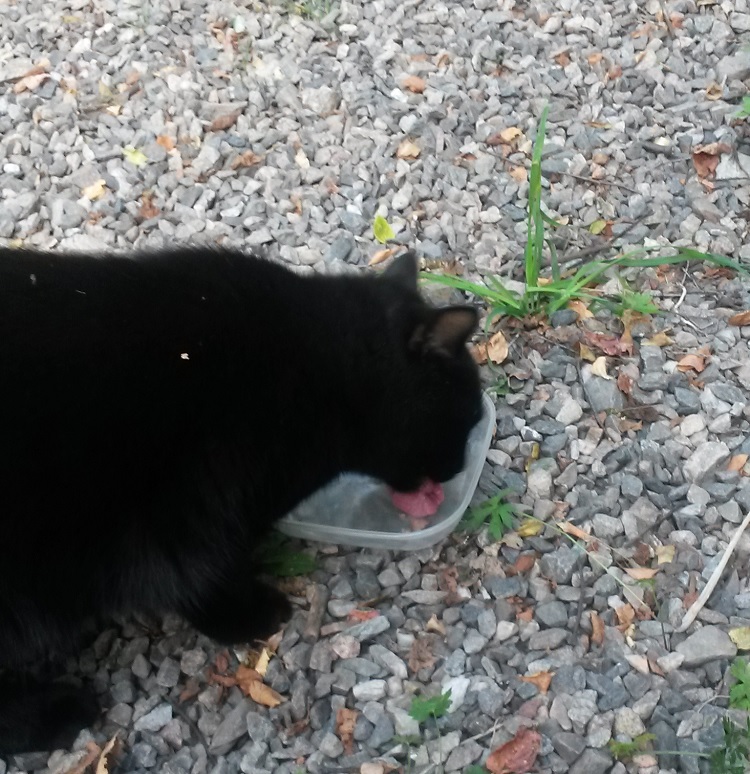 
After my thanks for this lesson I left the remains in a far corner of our little piece of land. I am quite sure there are animals around that will appreciate the offer.


Ohh and a small word of advice; do not wear sandals on bare feet. It is a very uncomfortable feeling having blood dripping between your toes... Or at least I thought so.
Upplagd av Ron kl. 10:23 AM

Email ThisBlogThis!Share to TwitterShare to FacebookShare to Pinterest
Etiketter: DIY or Do It Yourself, Traditional skills and knowledge