For the first time in nine (9!) years my family and I went on a vacation. A real one. No family, no familiar area. Our youngest daughter (8) had never experienced something like that and we had no idea what to expect going away with upgrowing kids. One week away from home. One week to reboot our systems. One week to release the accumulated stresses and to come back more or less relaxed to face new challenges with renewed energy.... And I think we succeeded! It has been a week with anticipations, with (minor) disappointments, with surprises, with near misses and successes... And of course some outdoorsy stuff and gear!
I could try and squeeze all the goodies into one post, but that would result in a mile long post and an overload of pictures, melting modems and destroying bandwidth the world over. So I'll split things up, showing you some of the highlights of this far too short vacation.

Our goal was the Swedish area of Höga Kusten or High Coast, an unbelievable beautiful and versatile piece of land, a coastal strip on the shores of the Baltic Sea, roughly situated between Härnösand in the south, where we would be staying and Örnsköldsvik in the north and it is a on the list of the UNESCO World Heritage list. We got there, because we were invited by a couple, called Anja and Peter, who, by accident, landed on a facebook-site where people share and donate stuff to benefit the, mostly material, less fortunate. So they ended up on the giving and we on the receiving end. We never met before, were complete strangers, but we were given permission to use a house, which they own, for free and she even managed to get 2 grocery stores to sponsor us and supply us with food for the first days. We were totally amazed, but not as much as we were as we got to know them and their boys better. What an absolutely wonderful family! Even after a week we said goodbye with a lump in our throats; all of us! That, to me, was the biggest surprise and the biggest gift we received that week.
On the downside I left home with an serious inflammation in my right arm/shoulder joint resulting in a visit to a doctor, a cortisone-injection, a very good handful of meds. and the prediction of an unpleasant and inevitable surgical procedure, sometime in the future. This would hamper my mobility and dampen my overall joy somewhat this vacation.
However I packed one of my backpacks, the old Haglöfs, loaded it up pretty good with the idea of giving it a run for its money. I added some items I wanted to try out along with it; a "new" bag for the Swedish messkit and a "new" shoulderbag for the smaller items. Another item I wanted to try out was a Swedish army M59 pair of pants. Because the weatherforecast was good with lots of sun I added 2 ponchos to the load, so I could create a shelter, either for the sun or for unexpected summer downpours. We were heading for rocky and hilly terrain.... Turns out that the most important items we brought were 2 1 liter waterbottles my wife got at work one day...
I will not bother or bore you with a holidaydiary, but stick to the essentials for this blog........... Outdoor, old fashioned or low impact lifestyle and of course gear and tools. The most predominant item throughout it all will be the amazing nature you can find there. There you can find a sea shoreline, high cliffs and rolling hills, deep forests, inland lakes and a great variety of wildlife, including quite a few very rare species.

During our stay we were treated with the highest temperatures for over 2 or 3 decades, according to some locals! Not a day went by without temperatures going over 30°C and next to no cloud in sight!
If there is one complaint I would have then it would be that the weather was too good! How is that for a luxury problem? Having a vacation with too good weather???
So...... what to begin with..... I guess at the beginning.... with the stuff I packed but hardly used or not even at all. 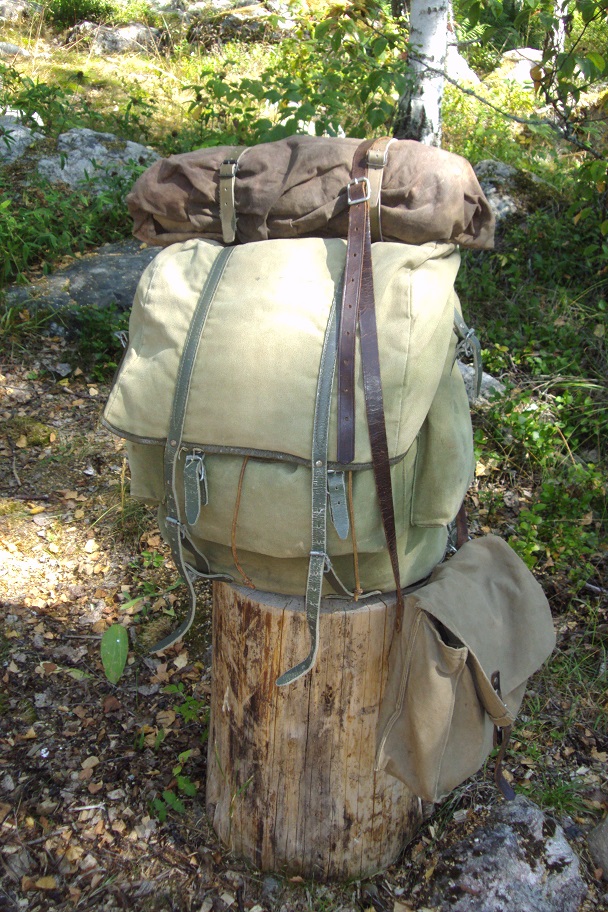 A rundown of the things I packed; the backpack; 2 ponchos with bungees for the fast and easy erection of a sun- or rainshelter, an extensive firstaidkit, a Swedish messkit in a new cover, knives, folding mugs and sporks to all of us and my summeranorak on top.
The shoulderbag; an ex-army ammobag with the small essentials such as compas, sharpeningstone, gamebag, gloves, bugrepellent, foldingknife and other bobs and bits. I figured these things would suite us as a daytripping family best. I did not intend to go out on my own.
To be honest I thought the backpack weighed a tonne, even without water or food!
I did try both of them on several daytrips and I am not too impressed of the backpack. It feels like my back is too small for it, especially around the shoulders.
On the other hand I was quite pleased with the shoulderbag. Small and handy, yet big enough to hold all that small gear, but small enough to reduce or even eliminate the tendency to overload such a bag. I will do a more in depth review of both later on.
Then there was the scenery. It is as I described. One of the most interesting and changing I ever saw and we all thoroughly enjoyed it, even with the sun beating down on us and as a final ingredient there was the history of the land, both domestic and military, ranging from an ethnological museum to an old cold war fortification. I'll start with the last one, since that was actually the first thing we went to see. 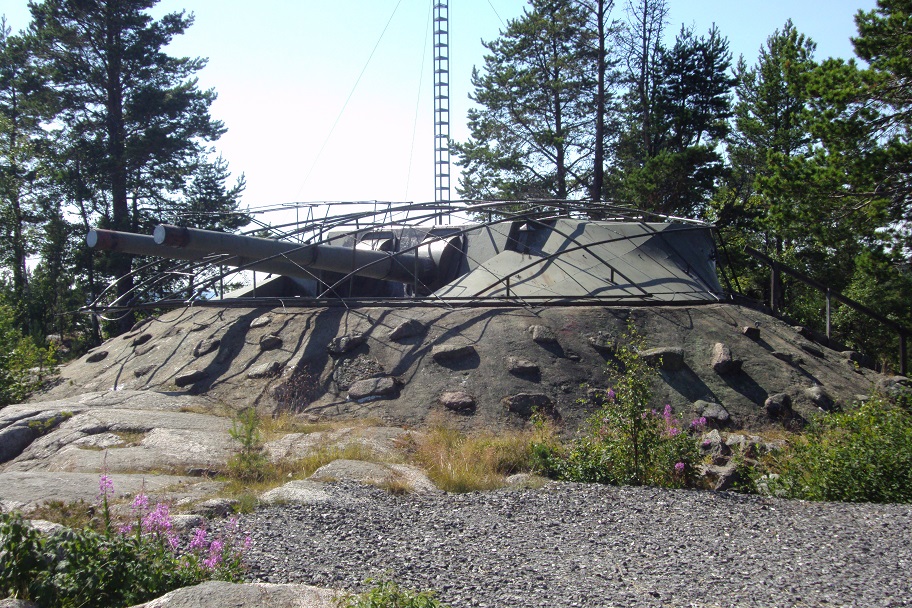 It is the old fortification on the island of Hemsö, part of Härnösand; the Hemsö fästning. An old fortification from the early cold war era, built into the solid bedrock of the island, designed to guard the natural deep harbour of Härnösand in case of a Russian invasion. The Swedes appearantly deemed that very likely for it would be a logical way for Ivan to try and take northern Norway, a NATO-partner and gate to the Atlantic. 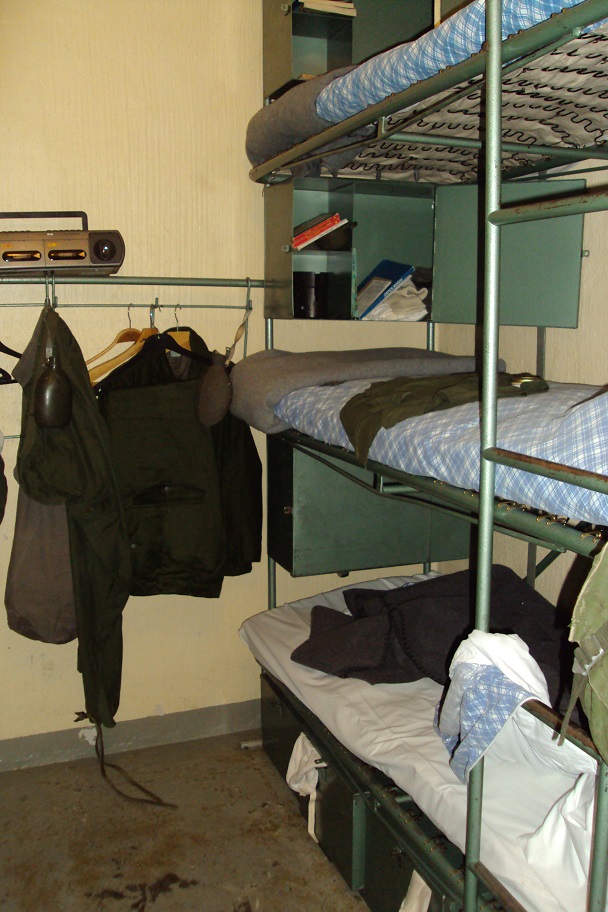 It is a very impressive fortification, even though its concept was already quite outdated by the outbreak of WW2, which the Maginotline, for example, made painfully clear. We took a guided tour over and in the fort, allowing us to get deep into the fort and rocks and we could gape at the awe inspiring scale of it all! It was still all there; the command-, communications- and firecontrolcentres, the kitchens, the hospitalwing with surgeryrooms, the soldiersquarters and the supplystockpiles, including stocks for up to 600 more troops during mobilisation.
Literally stuff all over the place. Almost as if the troops just went on a break..... 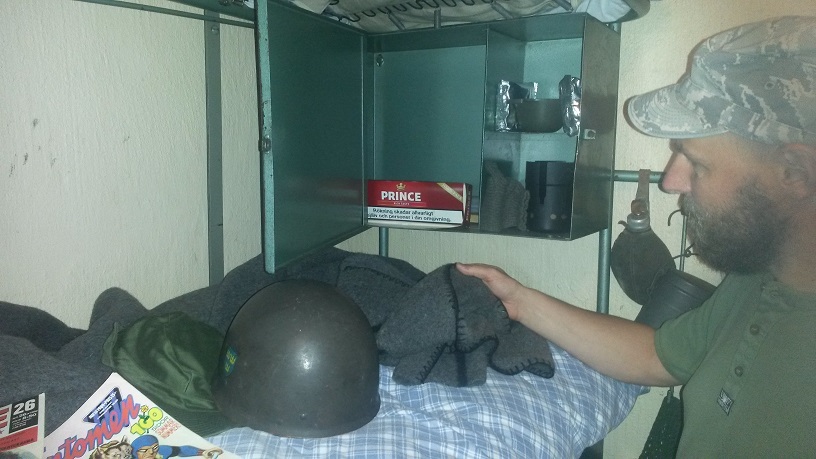 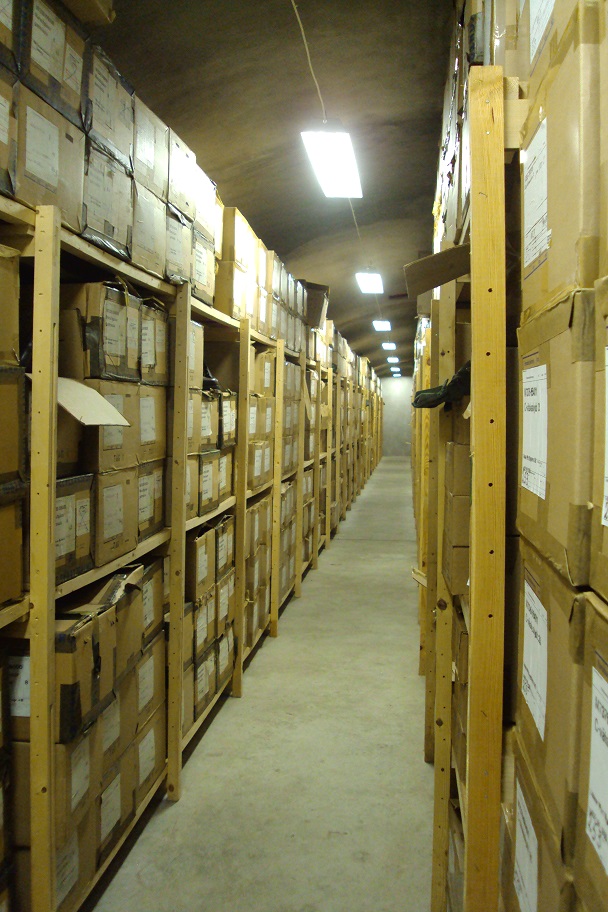 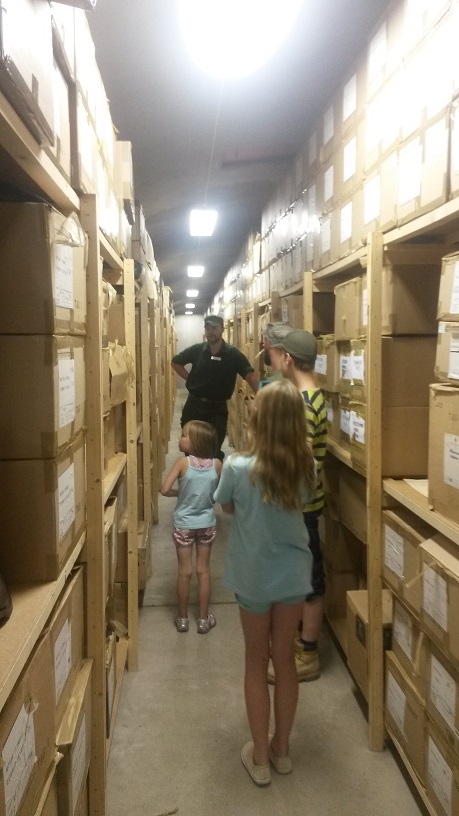 I almost fainted, but certainly drooled over all those military goodies that are so hard sought after by the
traditional outdoorenthusiasts; woolen uniforms, canvas backpacks and bags, leather boots and dozens and dozens of those high priced Swedish military blankets.


Follow the link above for more indepth information on it, since I do not except everyone to be interested in military history.

What was at least equally impressive, was the surrounding area in which this fortification was placed! High, solid rocks cliffs rising from the sea, covered with moss and widely spaced trees. 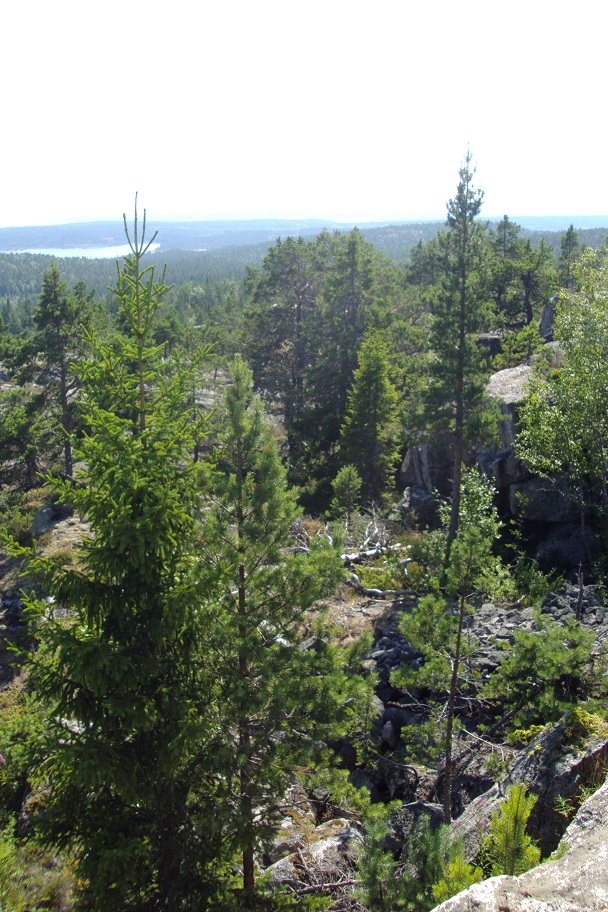 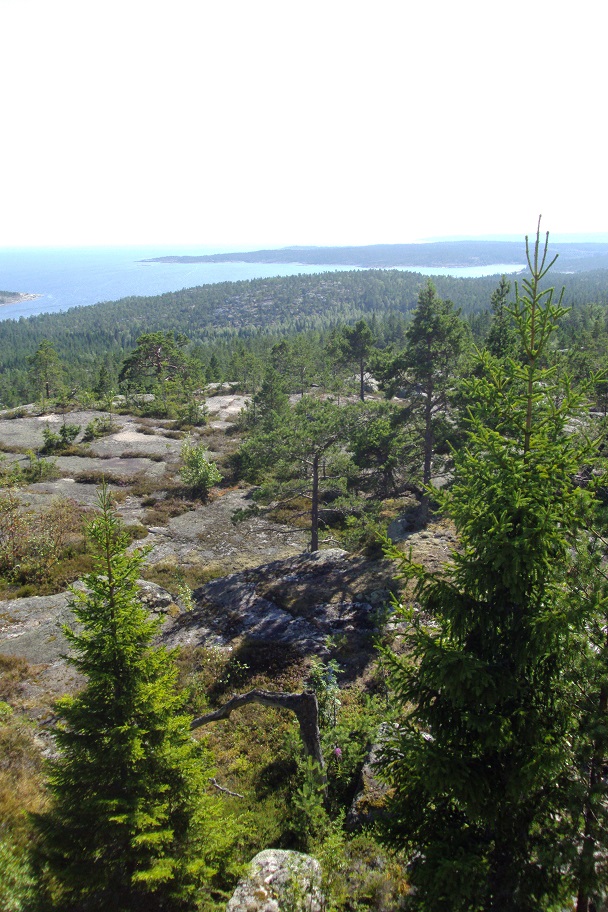 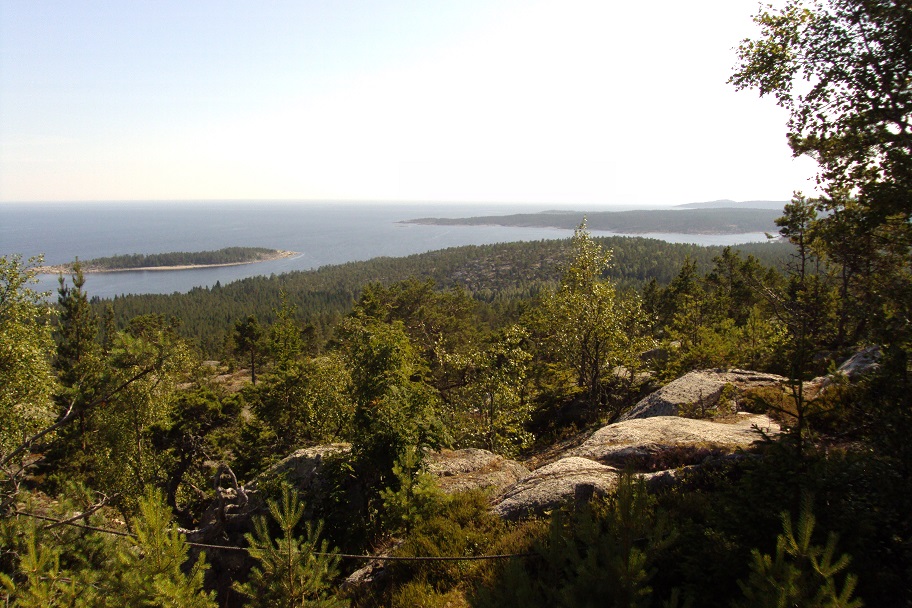