Learning things from past and present

Nothing much woodsman-like or adventurous to report, but...

My learning curve keeps on going up these days!
The first 2 of my beekeeping-lessons are a fact, more and more info regarding the greenhouse and the activities therein are being transferred to me and also some restaurational work at the museum I occasionally work is good for some new insights. Plus a purchase at a local secondhand/fleamarket initiated some more upcoming lessons in old agricultural skills.

But let me start at the beginning here; the beekeeping-course.
Apart from the obvious and necessary, yet highly interesting, theoretical part, we also got our first taste of the practical side and I ended up standing next to an opened beehive, without any protection, less than 1,5 meters away... What a buzz! Please excuse the lame wordplay, but it was! The hive pulsed with energy.... or was it just me? There we were, standing in the grass, looking at combs less then 50cm away from our faces, trying to find the queen, while bees were buzzing all around us. Finding her took some time, since she is not marked, but we did find the queen too without being stung.... Well, one of our group was, twice and the vast majority of the female attenders were "safely" standing on second row... more then a meter behind us, first-rowers... We watched her move across the comb, checking cells and even laying eggs, while she was constantly being surrounded and served by other bees.
For a guy, who grew up between people who start jumping, yelling and swatting with their hands in a panic at the first sight of a buzzing, flying insect, that was quite something and I did not even feel scared or uncomfortable at all (I never really was with bees, but wasps were a different matter). Which is a good thing if you plan on keeping bees. Ever since I started getting into this and reading books, following the lectures and such, I have already noticed that I have begun to look differently towards those buzzing creatures in the air. I look closer at their behaviour in my garden, noticing I do not see any bees at all, just different kinds of bumblebees. Even the indoctrinated fear of wasps has already become less and I manage to stand still and look at them as they buzz around me without reacting hysterically, although I can still clearly remember the last time I was stung by one, a forest wasp.
I can't wait to get going with beekeeping and our next lesson will be a very interesting one, I guess. We're going to be "fully dressed", so we will be getting even closer! Of course all this does not come without at least one more book added to my library.....
An added bonus is that my son is also showing some real interest in it; reading my books, looking at the bumblebees and "discussing" the behaviour we witness. Sweet!

Another new thing I did, was repairing one of the roofs on one of the old buildings on the hembygdsgård. That had started to sag and there were some suspected weak spots there. The repairjob turned out to be a complete rebuild of that roofside with only the ribs remaining in place. That gave me a good opportunity to study the buildingtechniques once used. It also gave me a clear and full overview of the contents of the building; an old threshingmachine, completely made of wood. That was used to separate the grain from the cornharvest and powered by a mule, donkey or horse. 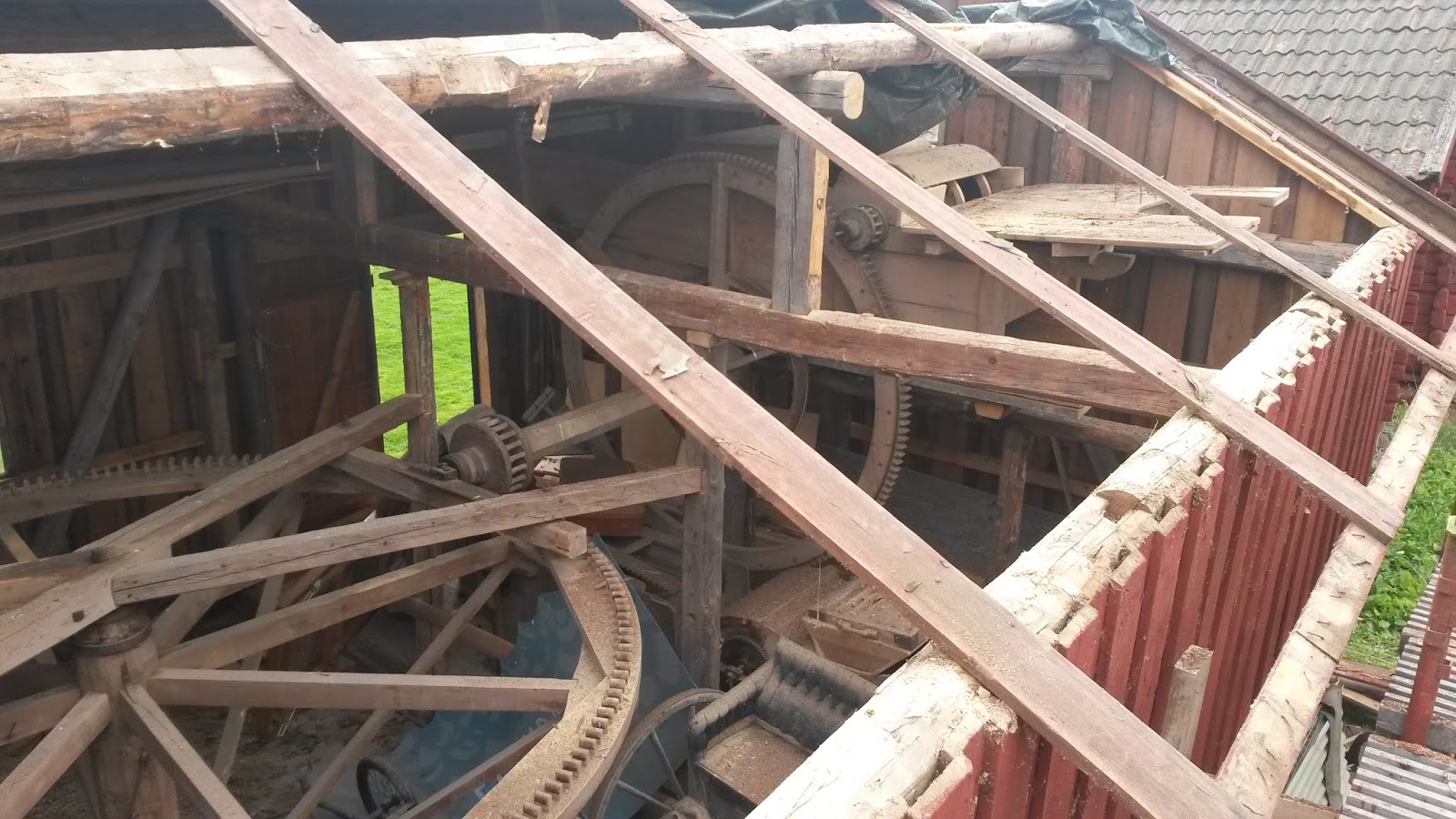 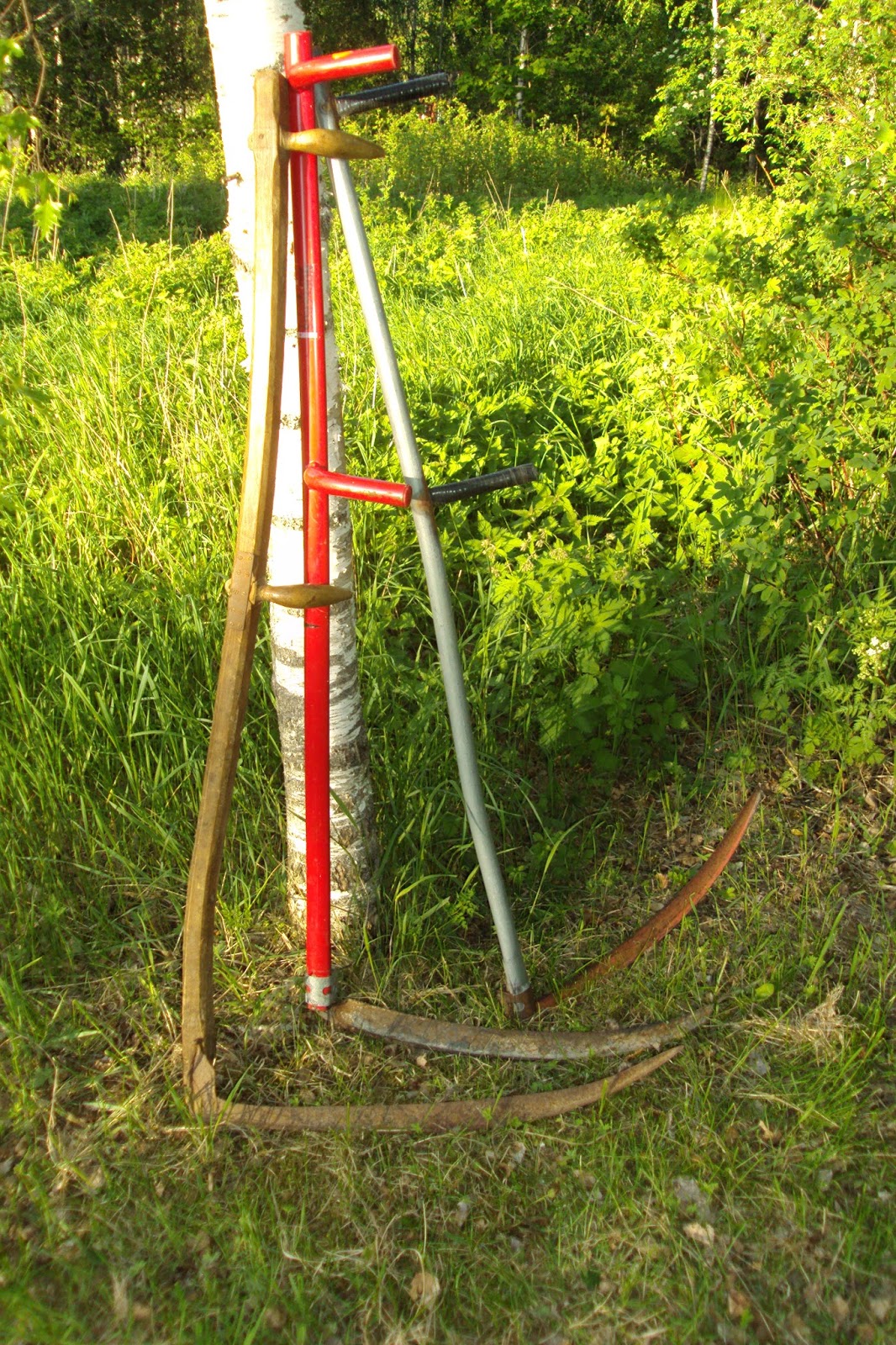 There is a third old famer's skill I am taking my first steps in, merely by coincidence; using a scythe.
I have been on the lookout for one for a while now and by chance I found an antique one in the secondhandshop I bought the backpacks, shown in a previous post.
It has a homemade, wooden handle and a long, rusty blade. The fastener for the blade was missing. I talked to the owner of the greenhouse I work/learn, asking if he knew where to get those. He then handed me a steel tube, homemade scythe, saying I could use its fastener for mine, since the scythe itself was not all that good. I also got another aluminium one, which would come with the greenhouses later on anyway.
So now I have three; an antique one, that will be restored, a good user and one for spares, since the steel tube handle will be discarded.
Through chance I came across a Swedish site, called Lienätverket.se, about scythes, which includes an online manual for those interested in learning the old skill of wielding a scythe!
direct link to handbook

Does that mean I do not get to "play" outside? Sure I do get out, but not to play really. So far I have gathered, cut, transported and stacked our winter supply of firewood..... or at least almost 10 m³ of it. That should see us through the worst of it, but I am planning on getting more, either by collecting and processing it myself or buying it. It is a lot of work, but it is also very satisfying to see it laying there, stacked and drying.... For the first time since we moved here, we do not have to worry about firewood. Apart from that time is consumed by the usual lot of chores, gardenwork (a lot), repairs and builds, the occasional sit-and-sip-coffee/tea-moments at our fireplace, listening to the multitude of birds, seeing the grass grow almost literally and watch the equally fierce growth of the rest of the plantworld. The amount of never before seen insectspecies is growing daily, yet we haven't seen a single tick in weeks!

Of course there is a bit of time to have some off-time and some of that did we spend on the medievalfair at Leksand last weekend. I always love to look at the crafts and tools of long ago. This year there was a serious focus on blacksmithing and leatherwork with a good handfull of skins, woolwork and weaponry. Despite the not so good weather it still was very crowded, so we kept the visit rather short.
Here are some impressions;
The first 2 pictures are from our smithing friend Erik, from Svartkonst
I really like his style, but I have totally fallen in love with his vikingshipchandelier! 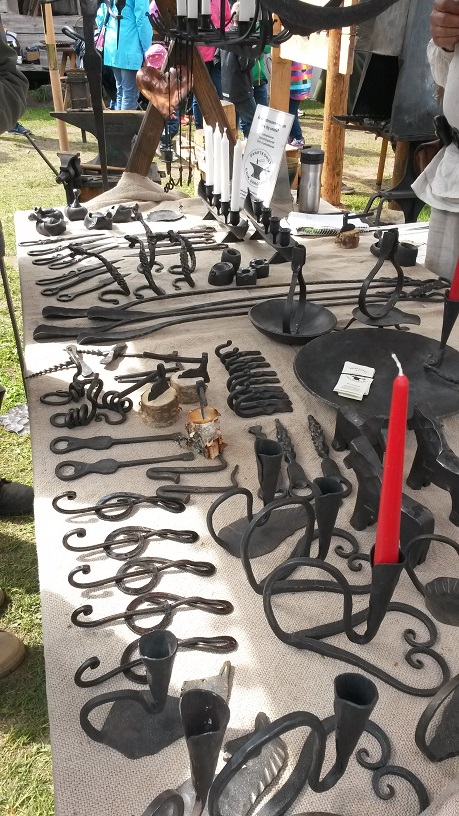 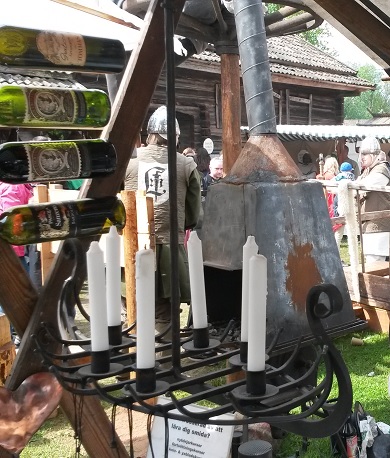 Another smith with complete fieldsetup. A wonderfull sight to see and quite skillfull he was, too! 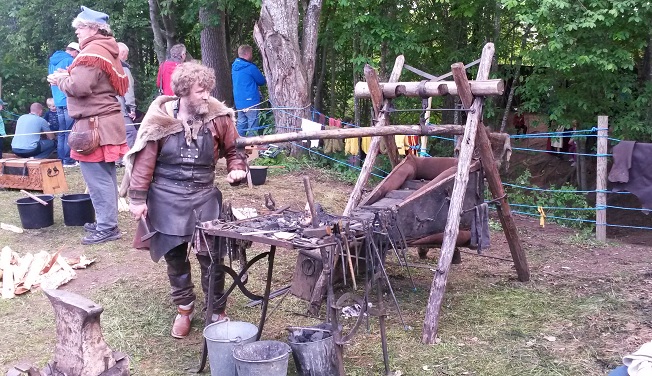 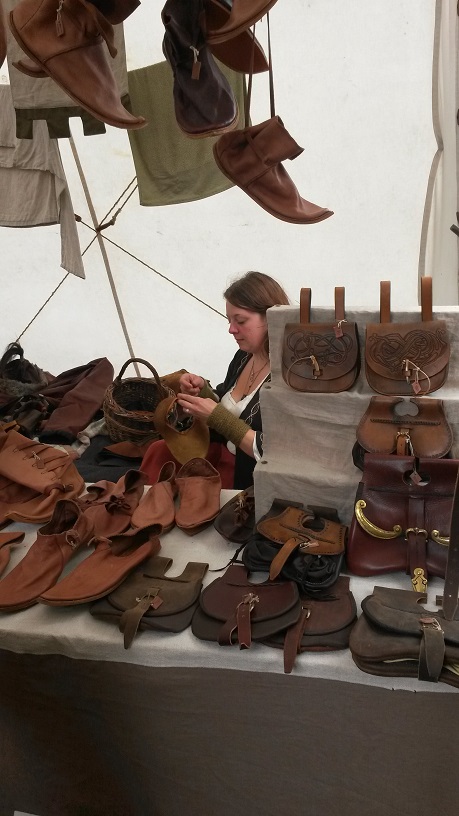 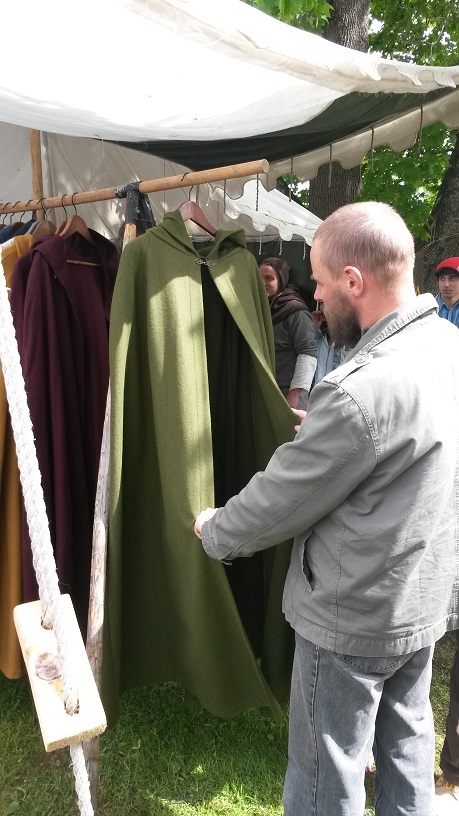 Checking out some woolwear, studying pattern and material.
--------->

Some more woolworkingskills. This time dyeing!
These people used plantmaterials as rawmaterial and alum as a mordant. They weren't very talk-ative though. Need to work on their peopleskills too.... You do not turn your back on people, not on an event like this and certainly not literally! 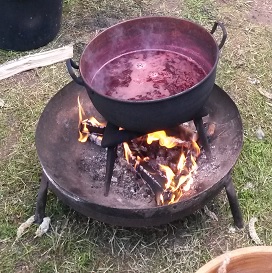 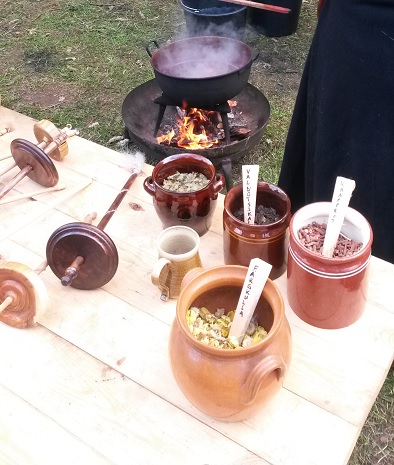 Someone looking for medieval hardware??
The folks at SPQR might be able to help. Those folks take their business seriously! 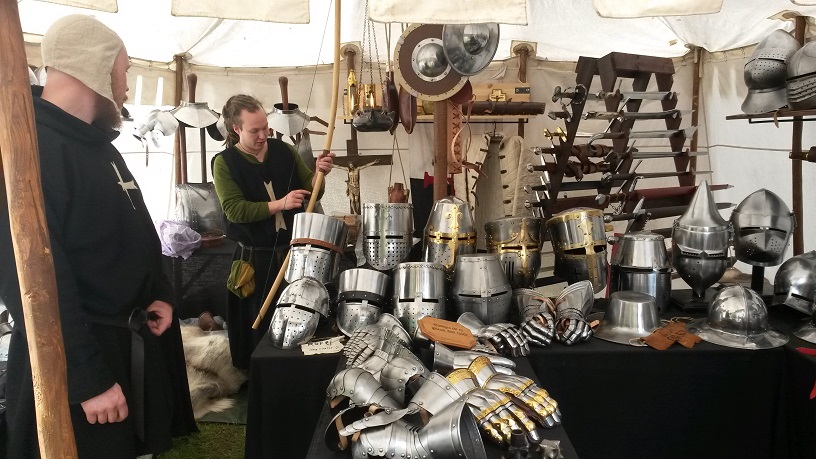 There were some more lessons, but much more on a personal note.....
Since a few weeks has my wife been at home on sickleave, suffering from fatigue and a burnout.... The past years have taken their toll. She is seeing professionals about this and she quite bluntly rubbed my nose in the fact that I too am showing the exact same symptoms for quite some time now....

The other one is that I seem to have become a pennycounter, a cheapskate......
We had a little bit of financial room, yet I feel really bad, almost guilty if I spend any cash on myself. Tools and books I can justify, since these are investments in knowledge, but buying some "luxurious" stuff??
Yet I did.... spent the humongous amount of 200kr of a single piece of clothing I did not really need....
An alpaca wool vest and I even like the pattern! 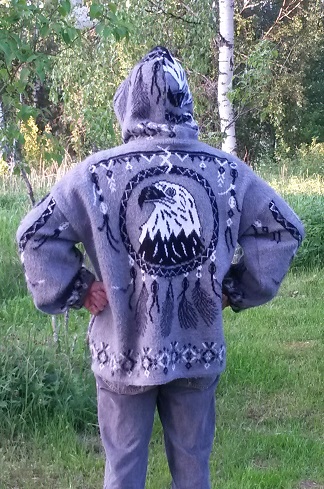