The weather is seriously messed up this winter as it was last summer. While the latter was much fun, the previous is not. Most definitely is NOT! I guess we maybe had one month of winterweather, but these last weeks was just an alternating series of frost, thaw, snow and rain. And that in THE wintermonth around here. And there seems to be no change coming anytime soon. Most of us had hoped for a bit a real winterweather for the last few weeks, but elas.... 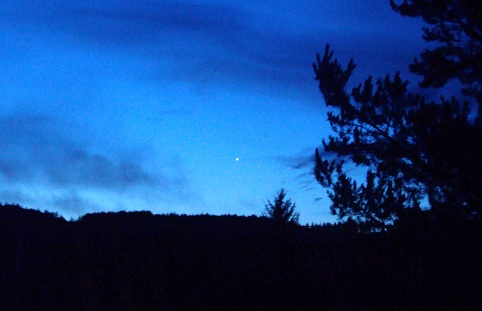 Right now the sun is shining brightly for a few hours for the first time since more than a month. Birds are singing and calling and I can hear a duvhök calling regularly too. I feels wonderfull to sit on the balcony, having lunch, sipping hot coffee, looking at the thermometer and seeing it has reached 20C.... 20???
Yep, 20 degrees in the sun! I would've taken off my wollsweater if there would have been no wind, but the breeze kept it chilly. 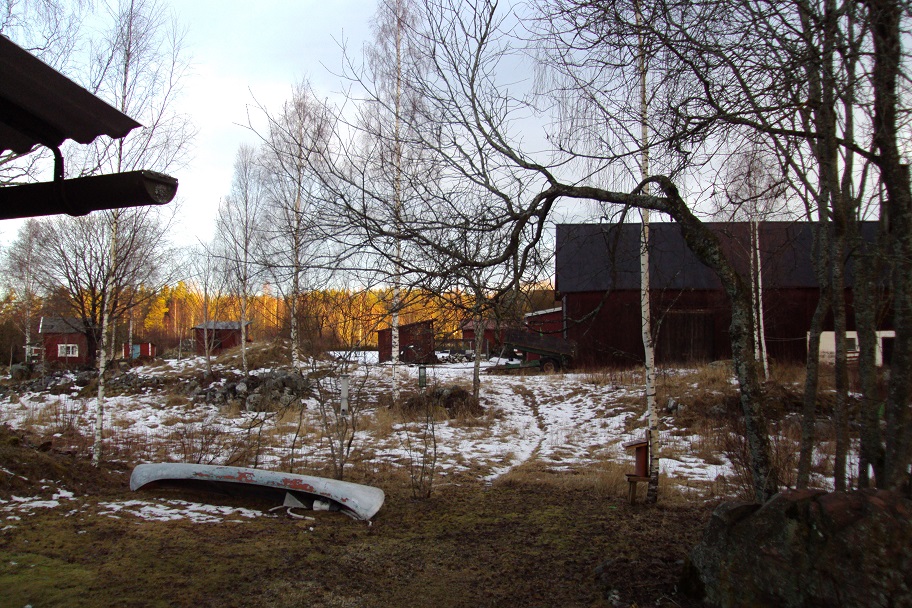 This morning, when we got up, we were greated by open skies and in the beginning sunrise I could see a bright light. Someone once told me that that was venus, reflecting the suns rays. The kids no longer need flashlights when going for the bus to school. How different that was just 1 month ago! The days lengthen with incredible speed again. A full half hour per week.... And after the kids had gone to school my wife and I watched the sunrise. We saw the line of sunlit trees creeping closer and closer toward the house untill finally the sun rose over the hills to the south and sent its much longed after rays towards us. We felt thrilled like small children and we stood there, faces held high..... feeling that glorious light.... because there was not warmth yet ;) 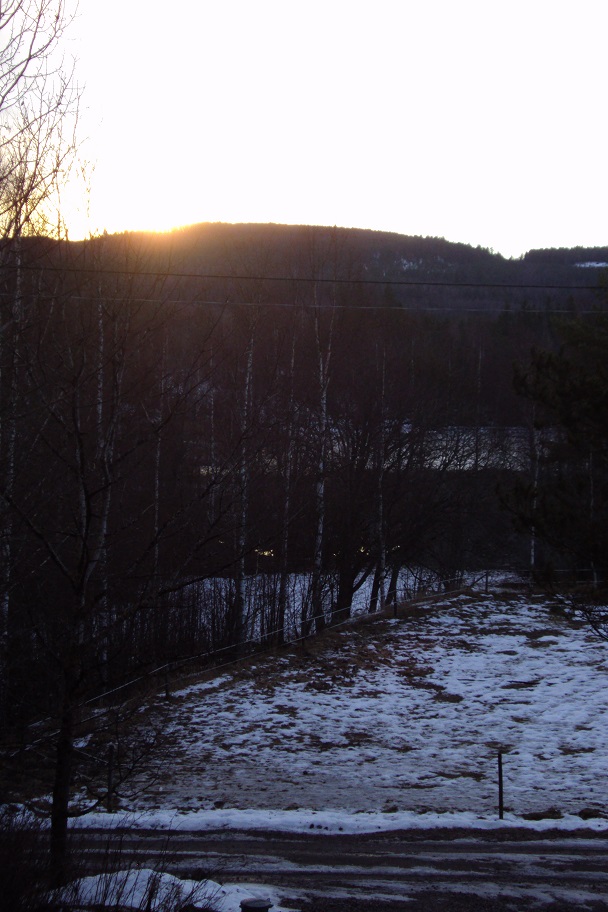 This approaching spring had started a lot earlier still. Last week, on februari 11th, we had another, short period of sunshine. It lasted for about an hour and a half, but it was enough to abandon the dishes and draw me out of the house. I strolled through the garden, because something had gotten my attention, when looking out the kitchenwindow. There was something different out there; the Bergenia had started lifting its leaves! Plantlife was returning to the north!
I put on boots and coat, grabbed the camera and went out. I looked at the plants in amazement. How they were braving the still lingering winter! and with my eyes fixed to the ground I saw more and more signs of green life; the bulbs are sprouting... 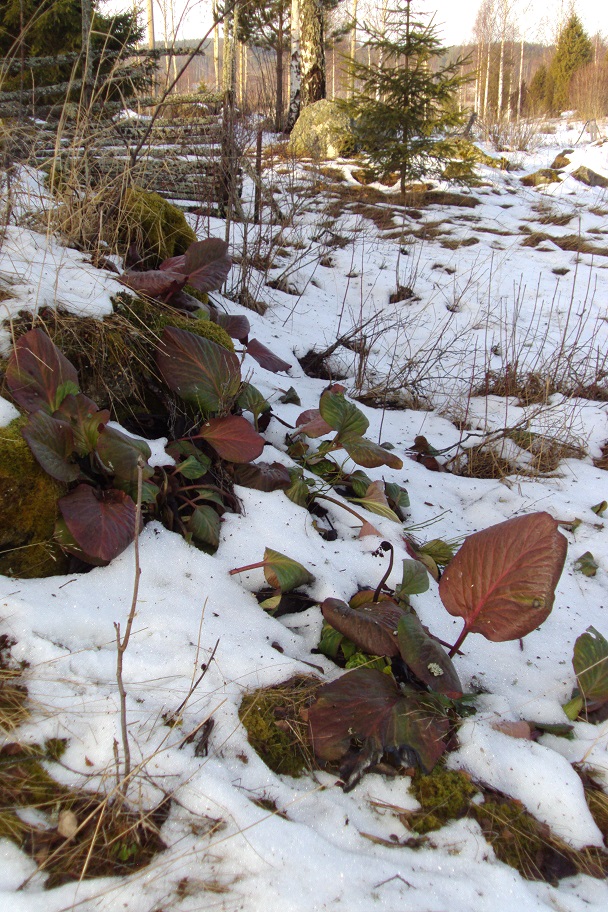 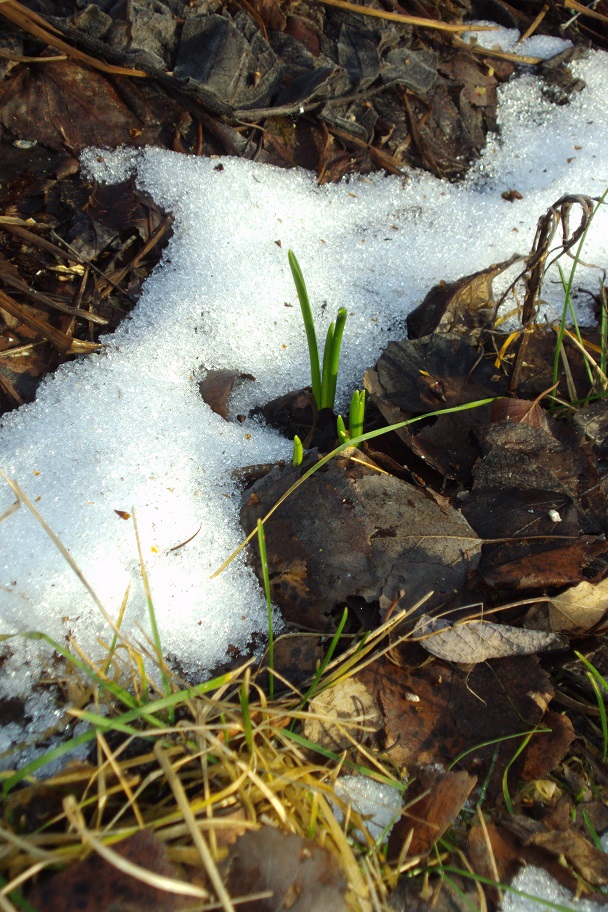 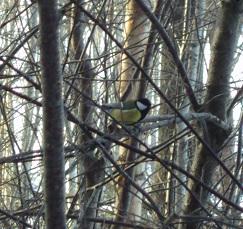 Because the weather was so fine, I decided to go and get the newspaper and on my way there I heard the small birds call all around me and I watched them sift through the sky..... untill I reached the mailbox. I heard a duvhök (goshawk Accipiter gentilis) call from quite nearby! It's loud and unmistakeble call echoed across the lake to our east. Something caught me. I dropped the newspaper back into the mailbox and went after the sound. It seemed to come from a group of sprucetrees, just 150 meters from where I was. Slowly I walked towards the group of trees, the mushy and crusted snow making a awefully loud noice, but when I reached the trees all went silent... But not for long! Within a minute or 2 I was being "harassed" by a great tit, which came to within 2 meters, calling and chattering all the time! It was obvious he (assuming it was a he, because of his actions) did not want me there! I just stood there and watched him, calling, fluttering between the thin branches, hopping up and down, back and forth.. 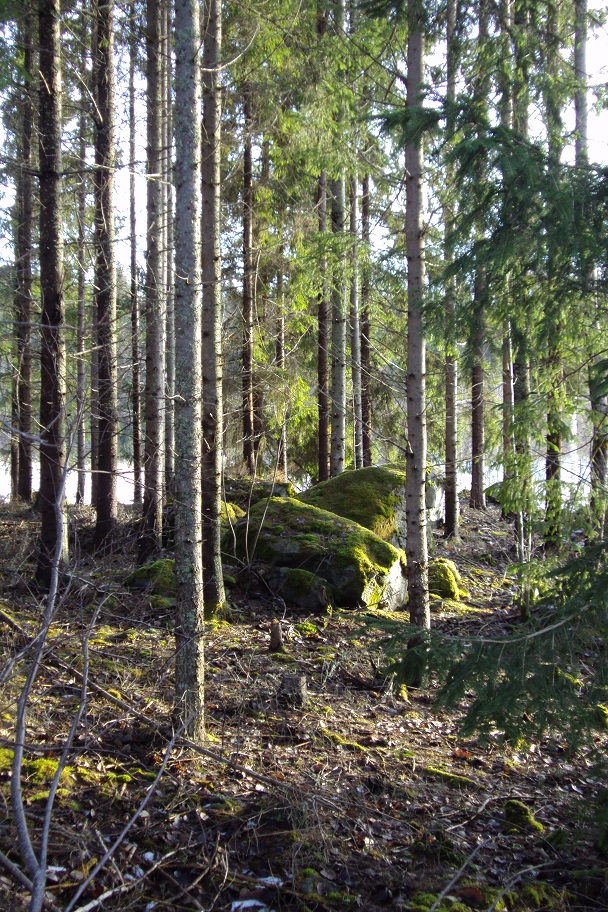 I decided to let him have his piece and move a bit further down the path, crossing the threeline and there I was surprised to see that there was not a speck of snow left underneath them! The soil was soft... even the frost had gone. I took my camera and as I took a picture I heard the hawk again.... right above me!! His call was so loud and sudden that it actually caught me offguard. And then the bird dashed off. Never got to see it, but its calls came from further and further away. I made my way home, sloshing through the slush, snow and ice. The morning had taken an interesting turn! However there were more surprises to come!
When I climbed the stairs towards the house I noticed something quite unusal between the rocks, underneath the rowan; a large collection of pine cones, concentrated on one side of the tree. I had seen a woodpecker previously, collecting the cones, but had no idea what it was doing with it. It appearantly took the to the rowan and opened them up to eat the seeds. Why not in the pinetree itself??
I wondered off into the garden and found more "cool" stuff... 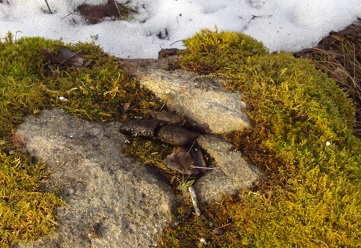 A fox having left its mark on one of the rocks, right next to the fireplace.... 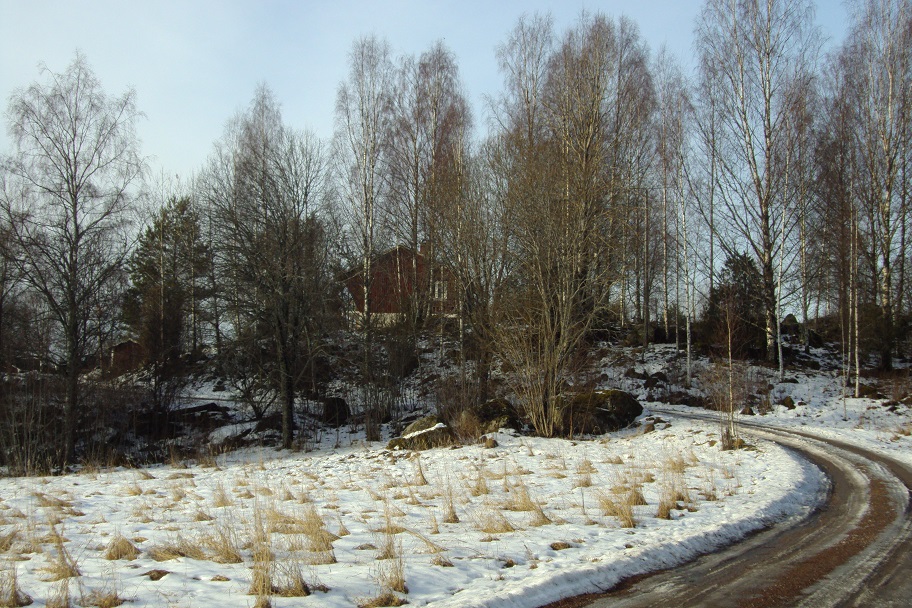 And as I wandered about I foubd another brave and optimistic plant; a sort of fern, growing as it it were spring! 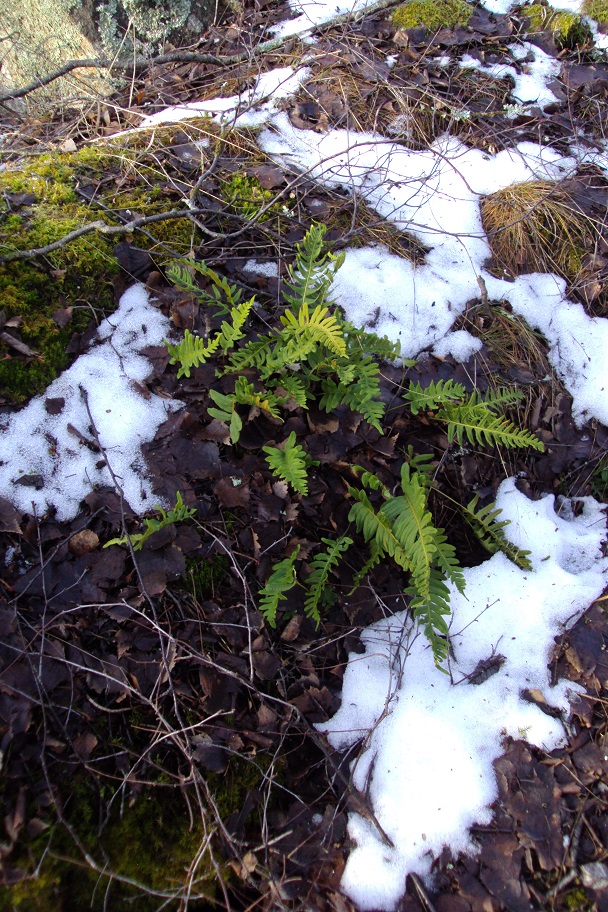 Insects started to stir as well; this year's first fly. can not say I am too happy about them, but they'll make good food for birds. This one was just by him self and quite sluggish. Today I encountered more of them and they were a lot more lively and quicker! 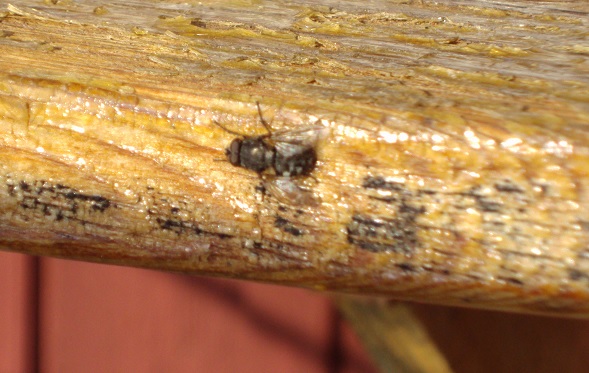 Dare I say that spring is just around the corner??
After all it still is februari and if the wind changes direction, winter can be back almost instantly..... yet I some how doubt it. Winter is loosing its grip.
The first reports of the heraulds of spring are already coming in; the first cranes have been spotted in Sweden already! They're still to the south, some 500-600km away, but still..... Also there have been sighting of the northern lapwings in southern Sweden...
Upplagd av Ron kl. 1:59 PM