Daily doings - nothing special going on.... or is there?? 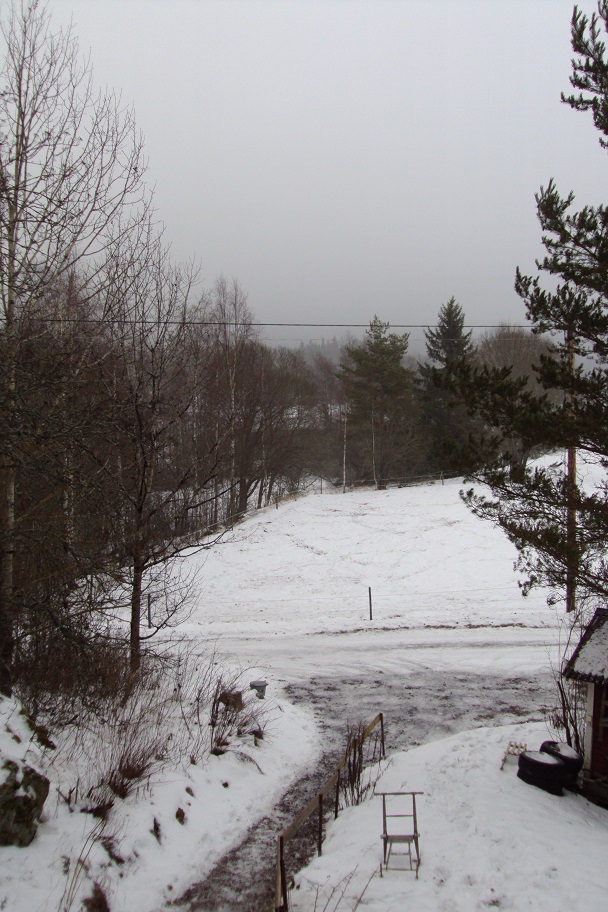 The weather has been grey and dreary for weeks now. Temperature has risen to around freezingpoint and for days now we have low hanging clouds and fog, so uncomfortably cold. I can not remember when I have seen the sun for the last time, but according to some pictures it was on my birthday, january 13th.... That was quite exceptional this winter and there seems to be no change coming anytime soon. This unending greyness is really starting to get to me.... As far as I am concerned may this winter come to an end.
We are having unseasonably "warm" weather too, with the exception of yesterday and today, when temperatures remained just below 0, but we are facing another week with + temperatures and maybe even rain! This means ice on roads and other surfaces.
Yet there are some significant changes going on! There are very noticeable changes in the behaviour of the birds. You can see the bluetit chasing each other throught the air and fighting in midair and I saw 3 magpies locked in aireal combat, dogfighting one another, seemingly for no appearant reason. There was no food involved. Furthermore we witnessed 2 couiples of woodpeckers chasing one another. I guess one couple were the domestic woodpeckercouple and the other one invaded their territory. It all happened in the tree right in front of our kitchenwindow, so we could follow the whole thing up close! Mss. Pecker appearantly isn't the easiest woodpecker to live with, because after the second couple was chased away mr. Pecker got chased about!
I also see the bluetits flying in and out of the birdshouses in our garden and the birds around here have become increasingly noicy. Yesterday I heard great tits sing! Same thing today with the addition of the typical call of a duvhök! Haven't heard that one since summer! And I hear the rest of the birds chattering constantly. Unfortunately we did not hear or see any owls all winter. We heard one hooting in early autumn, but after that  .... nothing.
I also saw the fox again today, but it was the same one as previously. I have not heard them all winter either and january usually should see the start of their matingseason. Does that mean that no mating has taken place yet? Or maybe one of te foxes did not make it through winter. We see plenty of tracks around here, even directly up to the house! Its tracks in the garden are very irratic, up and over rocks, crisscross through the garden with no appearant pattern. I guess it really does follow its nose.


We are also preparing for the next season, nosing through (online)seedcatalogues and making plans for the vegetablegarden. I am also experimenting with regrowing vegetables. I have taken the cutoffs from the carrots we got from the potatoeframer I worked at last autumn. We loved the taste of those carrots, but the farmer could not remember what species it was. I read you can regrow carrots by taking the top (where the greens grow from) you usually cut off and discard and place those in a bowl of water. So I did and yesterday I was able to plant those tops, with rootlets and green shoots, in some old glasses. Those were destined to be recycled anyway and now I can follow the progress of rootgrowth more easily.
The whole idea is to have them regrow far enough to plant them in the garden coming spring, hoping the carrots will bloom and produce seeds, so we can grow carrots from them. 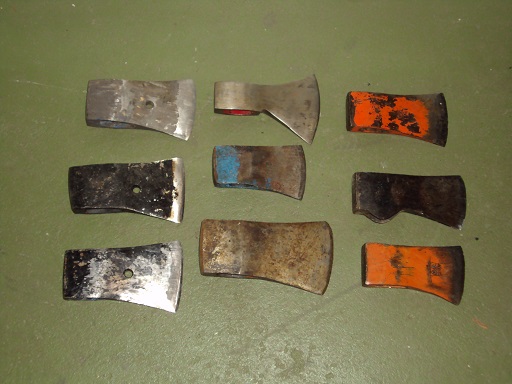 In order to pass the time a bit I have begun to take inventory of all the projects I have lying around... I really need to get myself organised AND a decent place to tinker! One of the things I did get done, was remove the broken handles from the scoutinggroups axes. They had quite a few of those mishaps. The older axeheads, (armyissue, the 3 on the picture's left) were easily cleaned out, since the handle and the wedges were made of wood. 2 heads however were not wedged in place, but glued (hardwarestore axes, the 2 orange ones)! I think the resin was injected with force or poured in molten, but it was a nightmare to get it all out! I drilled, chiselled and cut untill everything was removed, but the stench the resin left, while being drilled was unbearable! I had a headache all night and the smell remained in the cellar for days!
I also noted that the wedged axeheads stayed in placed, even after the handle had broken. No movement there, but with the glued handles the heads did wobble. The handles did not extend all the way through the head and in one there was at least a 1,5cm thick coat of resin to be drilled out before I reached the handle. All of the axes were manufactured in Sweden by the way.... At least according to the brand.
The top middle one is a stainless steel head I brought with me from Holland during our move, the bottom middle one had no handlebits left and the right middle one had something I suspect to be a selfmade or storebought and selfhanged handle. These heads will make a future scoutproject; hanging and sharpening axes. 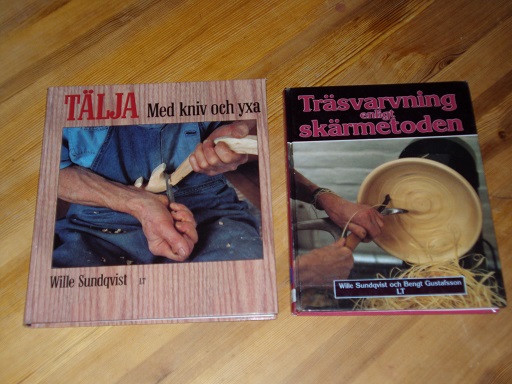 It seems we might have a tiny amount of financial room, so that might mean I can get some leatherstring for the wooden lathe. I really want to get that one up and running, especially now that I found some very interesting books in the local library! An internetsearch for them directed me to the municipally's library and I was able to get those books sent over to the local one.
They are Wille Sundqvist's "Tälja med kniv och yxa" and "Träsvarving enligt skärmetoden".
I will do a review of them shortly, but for those of you interested in (traditional) woodworking.... Get a copy of them! I believe they are also available in English. 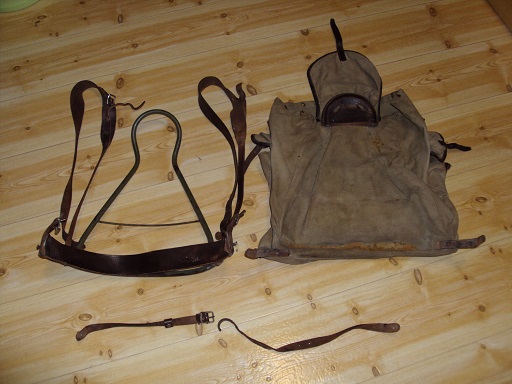 One of the projects I added to the list was fixing the old rucksack. I took it apart and it looks to be in a worse shape then I thought. I hope to get it fixed and functioning again....
The small leather straps, especially the ones on the lids, are in bad shape; dry and brittle, some a bit broken..
The reddish browns stains on the cloth are ruststains from the frame and on these areas there are holes in the cloth too. Don't know if that is rotten or simply worn through. The bottom od the pack has quite a few blackdotted mouldstains and one of the eyelets along the top edges have been torn out. All eyelets and buckles are rusted.
Upplagd av Ron kl. 1:58 PM