I know, I know.
Not really outdoorsy, containing high levels of manmade materials (practically all of it) and in violation of many of the things I stand for and advocate here....

But...it will keep me busy for many winterhours to come... and it's a very fun way (I hope) to revice some of my pre-outdoorbushcraftwoodsmanwannabe-skills.

Quit a while ago, while I was active on BCUK forum, I came across drawings of a woman, named Bushcraft Betty. She's the creation of a member there, called Biker. He and another member called J. Fenna, recreated her as a static model, using an existing figure as a base. See here. Biker was so kind to even provide me with such a figure and now I have restarted my hobby of modelmaking, I will have a go at her, too.
Boy, that sounds wrong somehow.....
In order to give you an idea of what she's like, watch the clip.

The basic idea behind this build is that Betty visits Sweden. I had contacted Aaron (Biker) befor, asking if he could do such a drawing for me, showing Betty in the Swedish forest, surrounded by local wildlife. Unfortunately that idea never materialised on paper, so I am going to try and recreat the scene in 3d!
To give you an idea of their creations; The figure in pink and yellow on the right is the original we all started out with:

Let me tell you a little story behind this model first.
Aaron does commissionwork on his drawings, meaning he'll make one of Betty according to your specifications. I asked him to make one of Betty, situated in Sweden, showing her at the edge of a lake, looking for wildlife, which actually would be visible all around here. However, because both of us got into some turbulent times, this idea never materialised.... untill I got that womanfigure. A little while later I came across a moosefigure, roughly the same scale, shown in a funny, cartoony pose. Then the idea popped into my head to do this drawing myself.... in 3D! I would combine the 2 and add more animals. So I started looking around and collecting the appropriate animals; moose, wolf, bear, eagle, rodents etc. It turned out to be a lot more challenging then I thought and it became a real quest, finding the right animals in the right scale with the right specifics for the right price....

Unfortunately my figure suffered a little. Pretty soon after I got it, my youngest one got it in her hands too....
It looks like this now; 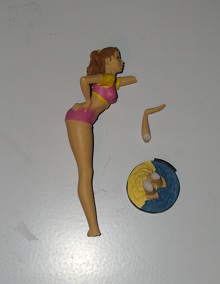 So far I have been collecting all kinds of toyanimals.
As said it all started with a moose I found in a yardsale. It is large, chuncky and damaged, but I like the pose. It'll be repaired, repainted and used as is.The major problem I encountered were the sizes of these figures. The wolf's too big, the bears are way to small, rodents are rudimentary playmobilfigures. I might use those as an exemple to make my own or alter them, so they will match the rest. 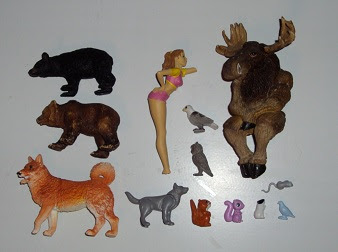 So what's the plan with all of this. I need to create a patch of forest with a small piece of lake with Betty centre stage and the animals imbedded in the the forest background.
This means Betty needs to get dressed up. You do not run around the Swedish forest dressed in hotpants and tanktop. She needs tools and a backpack, too. The moose needs a rock to sit on and the animals need trees to hide among. Sounds all pretty easy... right?
Upplagd av Ron kl. 4:17 PM