I skipped household- and dadchores and went out to the woods in order to quiet down my mind. I needed to clear my head, allthough my stomage felt like it was thinking of doing the same thing. Seems to be a seasonal thing around here ...

It would also provide me with a good opportunity to explore new terrain and try out new things. I wanted to check out a new part of the woods nearby and I figured I might try out the footrags during the proces, along with the shoulderbag and the "woodsbelt". The shoulderbag I showed befor and the belt is actually the belt I made myself almost 2 years ago, to which I added 2 double leatherpouches to the front and one large lather pouche on the back. I'll do a more indepth post on those at a later date. But first the footrags or footwraps or fotlappar as they are called here. The ones I have are swedish army issue in a wool blend and they have a rectangular shape. 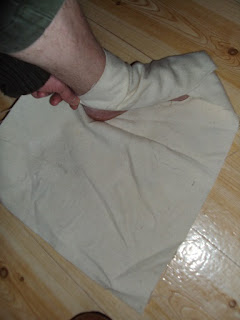 If you do a search on footwraps, you'll find that this sort of footclothing was widely used in several armies, such as the Germans in both wars and that the Sovjet military actually did up to now, introducing socks in 2013!
Anyway, the reason for using those by me is that these are easier to use in the field. They are dried faster when wet, insulate better and are more easily maintained. I used the previous image as a guide, following the sequence and wrapped the remainder of the wrap higher up the leg. as seen they can be used with socks too, so that enhances my option in real cold weather.
After a few struggles/tries I got the hang of it and slipped into my boots. It felt a bit weird at first, because I could feel the lumps around my toes, where the fabric was folded. 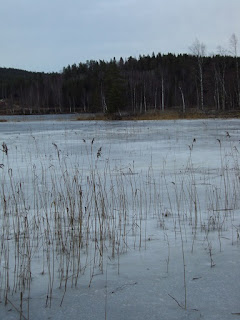 After that I grabbed my bag, filled my canteen, skipped on food, dressed up and headed out. temperatures were forecast to be around freezing ranging from -2°C to +1°. The wind died down to a breeze and it was dry, so quite enjoyable actually.
I left the road as soon as possible and moved through a field and a patch of woods up to the edge of the lake to the right of our house. From there I made my way through the woods, heading for the gravelroad my wife and I took a few days ago. How very different the world looked today. There was no real snow left, only small patches of wet, icecrusted snow and where there had been traffic it was just solid ice. Going up the road was tricky business. It was slippery, yet I felt the soles of the boots freeze to the surface on a few occassions too.
I reached the point where my wife and I turned around and I went on this time, following the now climbing road... 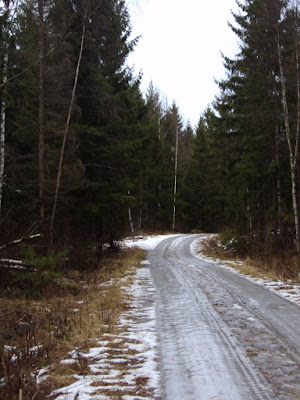 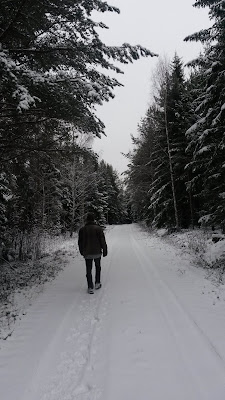 
I took the following pictures to see how well the anorak blended in with the surroundings and I have to admit that I am pleased with it. The boots kind of stand out, though! Maybe I'll tone them down with darkbrown shoescream or something. 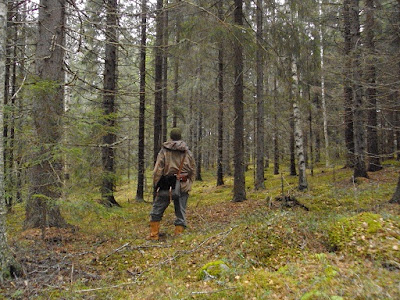 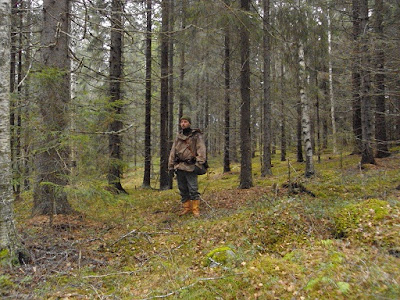 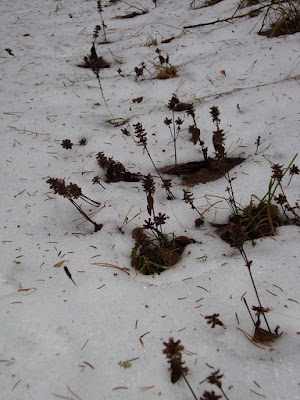 I followed the road and but left it frequently too in order to explore the adjacent woods. The area looks like a very promissing area for tracking this winter, but also for roaming in the summer! There were plenty of lingonberrieshrubs present, but I also saw many smultronplants. They showed some of their leaves, which were fresh and green! There were plenty of forestanemonea to be seen too! Overal I was very surprised to see a lot a green plants growing everywhere. It almost looked as if the plants had been fooled into thinking it was spring already.
The road became steeper as I went. If memory served me well there should be a loop at the end of it. At least that was what I remembered from the map at home. I hadn't seen much moosetracks so far and as soon as I had thought that, I came across some.... broken saplings. Further up I also found footprints and they became more frequent to further I went. The woods to both sides had become more accessible, because at regular intervals there were loggertrails cut into them. Many old ones, but also newer ones. I will take those a next time.
At the end of the road there appeared a large clearing. Many trees had been cut down, but they had also left a good deal of them. Against the grey sky I could see a bird of prey circling low over the trees. This will make a great spot for birdwatching in summer I think! I followed the loop in the road, untill I came across yet another loggerstrail. This one did have some snow left on it and in the snow were mooseprints, coming out, but also going in. The trail wasn't wide and I decided to see where it would go. It went further up the hill still with dense and relatively young growth on both sides. Yet there were more moosetrails crossing the trail. How does a large moose make its way through that? I'd be hardpressed to make my way through it! Wondering about that I went on and the trail made a bend to the left. To the right was a patch of young pine and as I turned I could see over the pines onto the clearing I just passed. My eyes were almost immediately caught by a group of dark spots between the trees on the far side of the clearing, about 300 meters away. I always check out those dark spot with my binoculairs and usually they are uprooted trees or the shady side of a rock.... But not this time! There was a moose feeding there! A large one too and I could clearly see and watch it, since the wind blew at me with a stiff breeze. No way it could smell me.... I took my camera I tried to zoom in as much as possible..... I'll help you with a red circle.... 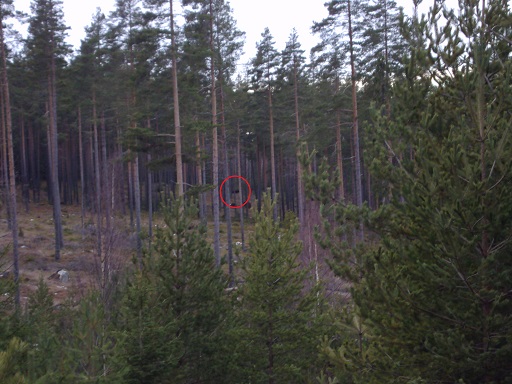 I do not know what happened, but something in me got triggered. My mindset changed like a switch being turned. I had to get closer, as close as I possibly could! I went down the trail as fast and as silent as I could and I had to take my eyes of the animal for about 2-3 minutes, befor I reached the edge of the clearing. The crusted snow made a lot of noise to my ears and I used the grassy edges as much as possible. I made my way onto the clearing, making sure I stayed low in the terrain and using the remaining trees and rocks as cover, keeping an eye on the probable spot I had seen the moose, but not seeing it. About 50 meters into the clearing there was a large bolder and a smaller one beside it and I decided to make that my observationpoint. But elas..... I peeked around it and there was nothing. I climbed on top but the animal had gone. Damn.... I waited somewhere between half an hour and an hour, but nothing happenend.
I did not want to cross the clearcut, thus exposing myself completely and I did not want to make my way through the young pinepatch either, in which direction the moose probably had wandered off. The thought of meeting the animal in there, allthough not very likely, did not really appeal to me. As I sat there, I let the rush (for a lack of a better word) wear off, thinking of what just had happened. I was surprised at myself. The physical reaction to seeing that moose was instant. The change of mind likewise....

It was about time to head home again. It was way past lunchtime, meaning the kids were coming home soon and some dad-duties have to be fullfilled. I think someone should be home when the kids come home and the house needed to be heated as well. So off I went, following the road and using the same pattern of exploring the woods.
I found many nice spots, but I also found the biggest anthill I had ever seen! This one was between 3-4 meteres wide at its base and would well reach up to my chest. It sat in the middle of a handfull paths radiating from it like strands in a web. This should be a lively place in summer..... 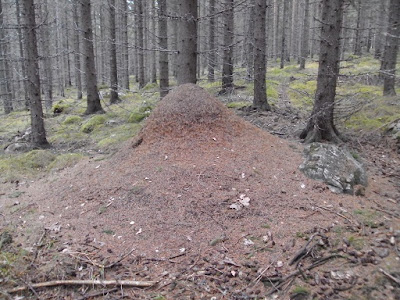 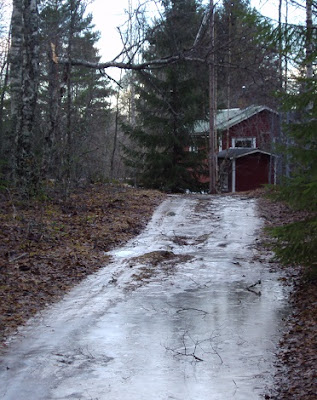 When I was almost home I found another surprise, but not a pleasant one this time; a textbook example of a widowmaker with add-ons!
I was focussing on the road, which at this point, was one large icesheet. I looked ahead and up and saw it; a birchtree, its trunk a fork from which one end was cut off. The other end had broken off it the recent stormy weather and was resting on the first stump. The crown was hanging on the electricitywires overhead. A decent gust of wind and it would come crashing down, maybe even take the line with it!
The house in the distance is a summerhouse and the power has not been cut yet, so it went unnoticed...
So I tyrned around and took an alternative route.
On my way out I met a local resident walking his dog and warned him not to take this road and explained why. He'd notify the electricitycompany.


As far as the footwraps is concerned.... I am pleased and surprised!
I stopped feeling them within 10 minutes. I guess they took shape around the feet and in the boot and stayed there. I did not have cold feet, not even a bit. Only when I was sitting on that rock did it become a little cool, but other then that, no sweat. Literally as it turned out, when I got home. Absolutely dry feet, despite walking for almost 4 hours straight. I'll be using them a lot more in the future!
Upplagd av Ron kl. 6:14 PM