Bird-TV is up and running!

Yesterday I hung out the bird- and deerfeeders again.
Temperatures have dropped significantly, to -13 on sundaymorning and about 10cm of snow or at least in the places it is not blown away of covered by an icesheet. Enough to justify a little feeding.

To give you a bit of an idea of the weather we had last week; 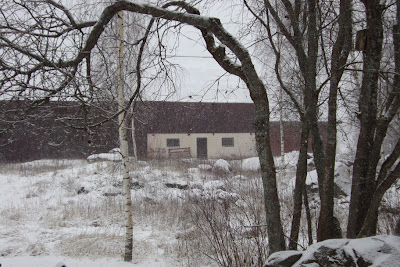 The glistening on the branches is a sheet of ice, about 1cmn thick. In the setting sun it looks like glass. 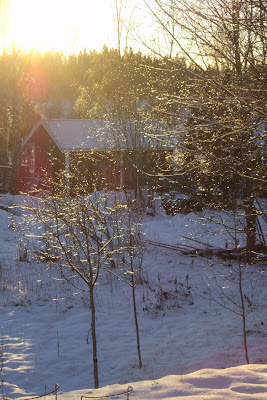 As said, the birdfeeders are up and within 5 minutes the first guests arrived; blåmes (Parus caeruleus or Cyanistes caeruleus), soon followed by talgoxe (Parus major). Very curious little birds. Within half an hour 5 or 6 more species had joined the banquet and by now we have counted 11.
It really is like watching tv, seeing the birds fly in and out, feed and squabble. I have noticed a peckingorder already! First are the blåmes and talgoxe, but these are soon chased away by a horde of grönfink (Chloris chloris) . These really fight amongst one another for a perch next to a feedinghole. They peck and flutter and even have dogfights in midair. However, when a pilfink (Passer montanus) approaches they have to abandon their position, despite the first not being much bigger then the latter. Not at all, but they simple change places without a fight. Then comes a nötväcka (Sitta europaea) and all dash for cover! This bird is left alone to feed. It takes a few seeds, is off again and the finches move in again, fighting to reestablish order.
The domherre are confined to the ground. They are simply to big to feed at the feeder and have to look for scraps on the ground. They are also the easiest to frighten off, causing a cloud of bearing wings to head for the trees, because the rest follows.... apart from the occassional gulsparv (Emberiza citrinella) . They often remain, whilst the rest scrambled for cover.
In all this confusion the blåmes and talgoxe have the peanutfeeder all to them selves. No other bird managed to get of hold on it and feed on the peanuts. They all have to go down and pick up what's left.... untill a female nötskrika (Garrulus glandarius) swoops in. Again all leave the scene and the large bird can stuff its beak with peanuts and is off to the trees surrounding our premises. She hides the peanuts in openings in the bark or between the branches of these trees! 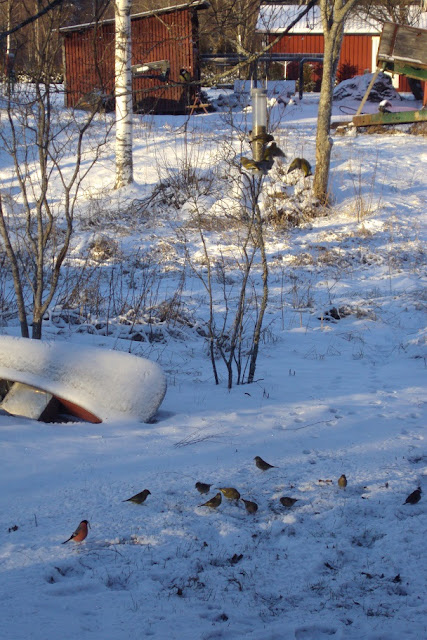 Yes, even a större hackspett (Dendrocopos major) joins in! 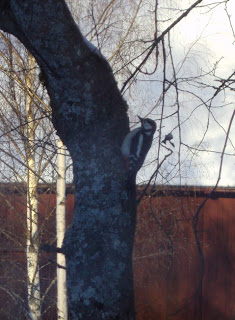 And much to our surprise the very same day 2 of these appeared on the scene; a mother with a yearling. They came to within 3 metres of the frontdoor, checking out the ground underneath the birdfeeders. 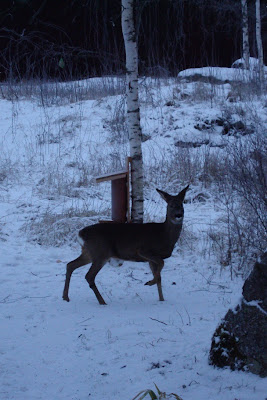 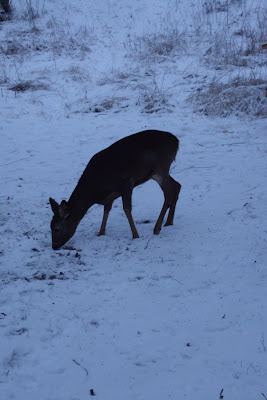 And as I am writing this, my wife called me to the livingroomwindow; there was a large fox trotting around in the horsepasture in front of our house. It was a large one, energetic, beautyfull in colour and with a thick fur. We could watch it going about its business for a few minutes, befor it went off between the trees. Our kids saw one yesterday on the frozen over lake too. I guess it could be the same one or its mate. There was a den closeby last year and it appears to be occupied still. We love it, but fear for our cats sometimes.
Upplagd av Ron kl. 2:44 PM

Email ThisBlogThis!Share to TwitterShare to FacebookShare to Pinterest
Etiketter: Wildlife