The season of the morningmists has begun. The air has begun to chill, especially in the evening and mornings. Geese and cranes have started to gather in the grainfields, which the farmers have begun to harvest...
Autumn is knocking at our doors! 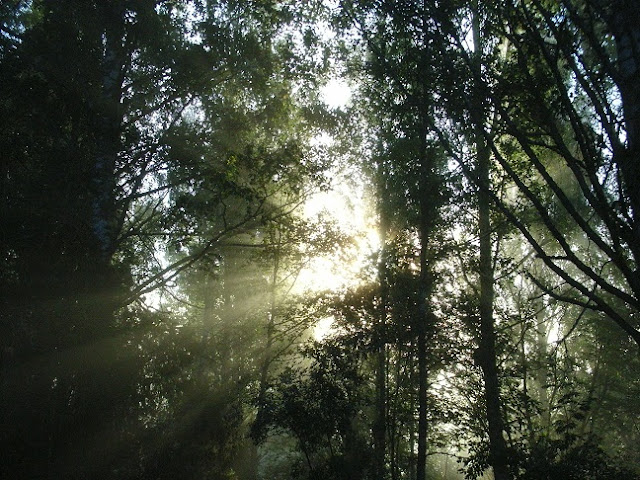 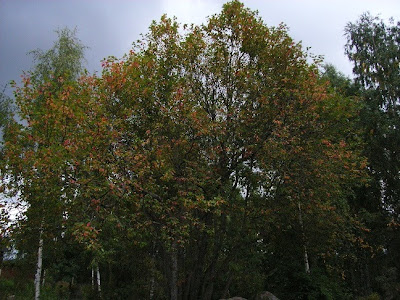 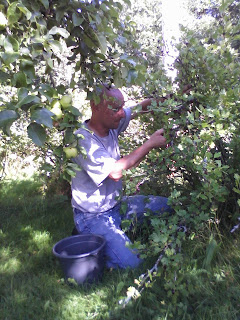 As I wrote last year, the foragingurge is making itself noticeable and since our berrybushes are not yet large enough to carry any substantial number of berries, some of our friends here lend us theres. we could pick all the berries we wanted at their place, since they already had enough. The same goes for apples.
So one morning the Mss. and I went to the pickingbusiness. My wife went for the red currants (Ribes rubrum)  and I for the red gooseberries (Ribes uva-crispa).
While picking I could not help but think about how very much the same it might have been for people through all the ages, doing the same thing.... apart from the jeans and the plastic bucket. But they'd still recognise it all..... and it's a prickly business picking those gooseberries... but they are so delicious!
All around us fruit is very abundant and that reminded me of a saying my grandparents used to say:"If the harvest is good, prepare for winter to come!" 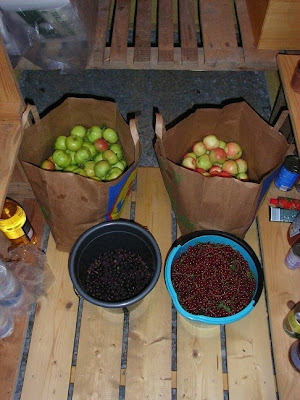 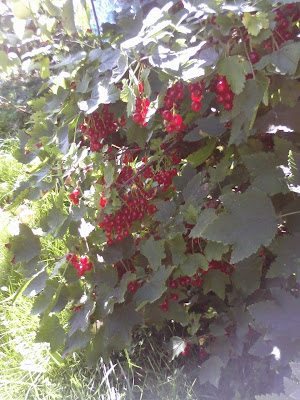 Another thing I am busy with is helping out with the potatoharvest. This is an entirely new experience for me; working at a farm. One of my jobs is to stand on the harvester and pick out any unwatned things from between the potatoes as they come by on a conveyerbelt; stones, lumps of soil, rotten, damaged or unripe potatoes. It's a good exercise for the hand to eye coordination; spotting, picking and discarding of the item with one hand, while the other is doing the same thing simultaniously in another spot! Between the stuff that comes up I found many animalremains, but I kept 2; the underjaw of both a deer and a moose. I'll be using the teeth is some way.
On the first day I had to pick some potatoes by hand, since the automated picking went wrong somehow and I was told I could keep the ones  picked; a good 25kg in all! Later that day we harvested another sort and while filling the containers with the harvest, some were overfilled and spilled some potatoes. I picked these up too, but was told not to put them with the others. They might be bruised or damaged by the fall, so I could have those too. Another few kg's in the bag!
But my first workingday started out well in another matter. The farmer switches fields every year and this year he tried peas as a fertilising crop. There was a tractor with wagon standing on the lot and the peas poured out at the back. Without question I started helping fixing the problem and picking up the spilled peas. Later I mentioned that I'd like to try some and I was told I could help myself..... So the first day was a very rewarding one; about 30kg's of potatoes and some 5kg's of peas...handpicked by me... 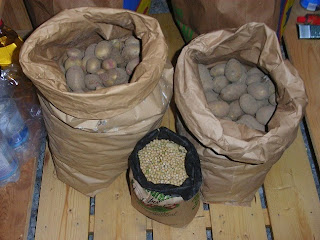 Another first for me was taking a ride in a tractor. Never did that befor and I felt like a small boy living out a dream; here I was, looking as a farmer, riding a tractor and harvesting crops!! Damn, that felt so good!! But the best was still to come. On our way back from the field the father of the farmer, with whom I was riding along, pulled over and said;" Now we'll switch seats..." He knew it was my first time on such a machine ever, but he thought that it was a good idea to get me familiarised with the equipment if I were to stay for a longer period of time. So there I was; sitting behind the steeringwheel of an unfamilair vehicle with a trailer (another first time!) loaded with a few tons of potatoes...on a less then flat tarmac....and other traffic.... It was not as easy as it sounds.... But my wife saw the grin on my face, when she came to pick me up.... A big one....

I even enjoyed the work, despite it being noisy, dusty, hectic at times, standing at a conveyerbelt, but I am doing a job that counts. I am harvesting food. I am outside all day, work out that lazy body of mine, have enough time in between harvestingruns to look at the world around me, seeing the land and forests, hearing the gathering geese and cranes and I sure as hell did get "a taste of the land". The dust in my mouth makes sure of that. ;) The icing on the cake was the friday afternoon. We were just about to wrap it all up for that day. Maybe have one or two more loads, when the farmer's mother showed up with an applepie, straight from the oven. We sat there in the field next to the potatofield, in the sun with our butts in the remaining hay, fresh applepie in one hand and a steaming hot cup of coffee in the other.... It just felt so good, so right.... No beachholiday could ever match that!