Not much activity here.....

As I have been forced to take it very slow lately (being grounded is more likely). An infection of the airways made sure of that. And quit a nasty one, too! Can't remember having had anything like it at all! I've heard tales about virusinfections to chest, lungs and airways from all around here.
I could have gone the "easy path", running to the doctor and get myself a ton of antibiotics.... Offcourse, me being me, I took the hard way; curing it out without chemicals, firing up that homedefence we call immunesystem and strengthening the body..... later probably. That means taking it slow, but that's mandatory, since my energylevels have dropped significantly. Shortness of breath and fatigue are some of my companions these days. Luckily the weather has improved, so I regularly take some time to soak up that vital vitamin S(un). Combined with much fresh food, fruit and a regular microwavesession (my wife is a reikimaster and when she treats me, I call that microwaving me) means that I am on the mend right now. Progress is frustratingly slow (for me, because I want it to be over NOW), but considering the impact it had, I shouldn't complain.
The reason why I am writing about this, is because I actually wanted to share an experience my wife and I had this afternoon. She was home from work early and yesterday we set up the kids' trampoline. This also happens to make a great place to sip some coffee, read the newspaper and look at the budding trees, watch birds, whilst sitting and/or lying in the sun, soaking up those rays and producing those D's! While we were out there, it hit me; there was a total absence of any manmade noise! Nothing! Just the wind in the trees and the birds around us and we were at home! A deep sence of peace..... It still surprises and amazes me, having lived in cities all my life.... This place really is a gift, with which we are blessed!
We could watch how several birds have started, or are about to, inhabiting the various birdhouses the previous owner hung up. There are at least 2 couples of blåmes housing in them and there were squables over a third one. I witnessed a rödstjärt checking out another one and it came back again later. I so hope they will nest in there, too! 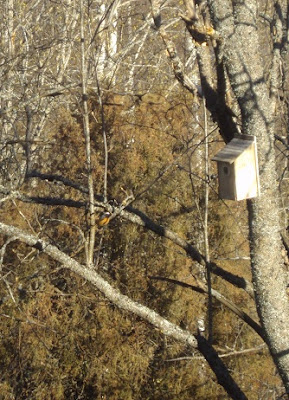 (The first thing I'll do, when I get a job, is start saving for a decent camera!!)

And when the kids got home, we had to vacate the trampoline, but after a while I had to fullfill a promiss I made a while ago. I had to start teaching my youngest daughter how to handle a knife.
For that we used my wife's first Moraknife; a Mora scout from the '80's! 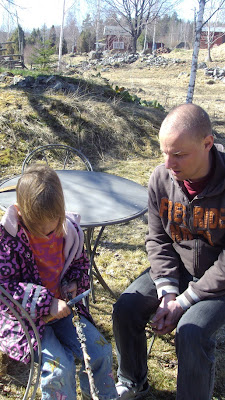 And while I'm at it, I might as well tell you about some other stuff. The number of animalspecies we see around here is increasing at an almost explosive pace. There's so much going on I can't keep up!
We saw our first bats at the 20th of april, flapping around the balcony and during the day we saw several species of butterfly, like sorgmantel (Nymphalis antiopa Linné 1758) and påfågelöga (Inachis io). Offcourse many new birdspecies like taltrast (Turdus philomelos) , björktrast (Turdus pilaris) , stenskvätta (Oenanthe oenanthe), träpiplärka (Anthus trivialis) and a tornfalk (Falco tinnunculus) . These are just the ones I could identify with a form of certainty!
And last weekend I could add a rödstjärt (Phoenicurus phoenicurus) to that list. I am impressed by the sheer variations in the colours and patterns!

There are however some guests that I find peculiar; gulls! (Larus canus) I always associated these with the sea, so seeing and above all hearing them, gives this place a strange coastal atmosphere.

But some very special guests made their presence know on a special night. On the night of the 30th was walpurgisafton, which we celebrated with our very own bonfire. We had collected a large pile of natural debris from the garden and at night we lit that, saying farewell to winter and welcoming spring..... under the distinct and loud calls of loons! (or storlom (Gavia arctica) as it is know here). Regular readers know  have a soft spot for these wonderfull birds and their primeval, eerie calls. 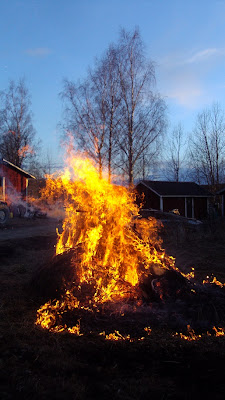 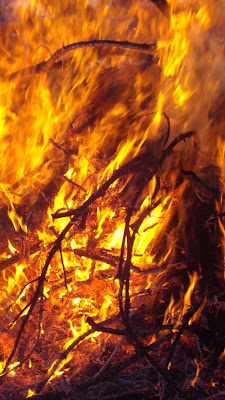 Previous to the fire we went to the lake in order to just look at it and pass the time untill it would be dark enough. There we saw a couple of them, peacefully floating on the water. Later, during and after the fire, we heard their calls, coming from 3 distinctly different directions! Maybe one of them was an echo, but that still leaves 2 seperate calls. Don't know how big a loonterritory is....
Storlom