My 100th post.... It almost seems as if I have a lot to say....
One hundred posts and looking back I think I have come a long way....
I wanted my 100th to be one with a meaning, a post of significance. I do have some items waiting in line, but some of those should stay there for a while, untill things have developed. Other will stay there, because they are not all that shocking or important....

So... what should this one be about? I though it might be a good thing to talk about something that effects each and everyone of us; FOOD!
It is something we all need on a dayly basis, something we all think about, yet I have the idea that the vast majority is unaware of what is going on with our food these days. Every once in a while a major scandal pops up in the media about our food and mostly because there has been some obvious foul play with the manufacturing of it. But over the years I have discovered (or think I have) that there is much more foul play going on on much more subtle levels. Ever since I was "diagnosed" with far to high levels of cholesterol over the whole range, LDL, HDL and tryclycerids, that I have been thinking things over, started asking questions and started looking for answers. The developing picture was not a pretty one!
I firmly believe that the masses are constantly lied to about food, are constantly bombarded, indoctrinated, maybe even brainwashed about modern food and how "healthy" some are and how "unhealthy" others are, but quit recently my search for answers has been rekindled by the appearance of a new word "the paleo-diet". Some of the people we know, eat in a certain way that, at first, did not make much sense to me. I thought it was just the next hype, just as Montignac or Atkinson, untill I started to dig a bit deeper. I came across websites, blogs and articles that made me look in awe... in shock... and even in horror. I knew we were being played for a fool by the big foodproducing companies from my cholesterol "illness" days, but this.... This even surpassed my already suspicious mind.
The blog I meant was this one; Het paleo perspectief. Unfortunately for many of you it is in Dutch, but the guy writing it gives many references and sources and the mayority of those are in English.
And that's the refreshing part. Not only does the guy seem to know what he is talking about, but he also provides plenty of sources and names to back his stories up, which one can verify for oneself, provided you understand what it is they are talking about.
Reading on I came across terms like "wheat belly", lowcarbfood, cholesterol not necessarily being bad, but sugar and grains are, fat is good, bread's a killer etc..... But also other things are being talked about. Things like sustainable farming, consuming natural foods, becoming healthy by avoiding certain everyday foods, like sugar, bread, cereals and pastas, yet that eating meat and fat is actually good for you! Stuff like that....

I have only just begun to scratch the surface, but there's certainly "food for thought", there.

Here are some things you might find interesting;
Nutrition Science Initiative
Joel Salatin

Recently I also heard about the foodscandal, where ready-to-eat-meals contain horsemeat instead of other meat and I found an article at the Swedish Naturskyddföreningen stating that there are illegal chemicals in half of the products we consume as food (see here kemikalier hittas i allt fler livsmedel)

All these messages have got me thinking and I must admit it is hard not to become paranoid about it! I honestly no longer know what or who to believe.... But the trust has long gone.

So I'll start by cutting back on sugar and go from there. One step at a time, (because I already noticed how hard the lowsugarthing actuallt is!) At this moment however I have no idea how to eat really healthy, based on a low income and feeding a family of five. Untill I do I will be our family's guineepig. Allready chucked out the cholesterolmeds years ago, sugar's next and in due time I'll give the no-wheat-approach a try too.... What have I got to loose?

Apart from all this we'll be starting homegrowing fruit and vegetables this year. It is what we have been planning to do all along and we used to do so in Holland too But since the climate is a bit different here, we had to relearn the basics about having a (food)garden. Planting and sowing requires a different approach and timetable and many species of plants we had in Holland will not survive here. Also the soil is fundamentally different here and there's the wildlife to consider. On the plusside we have a large and free supply of horsemanure and we'll be adding chickensmanure to that too soon (hopefully). 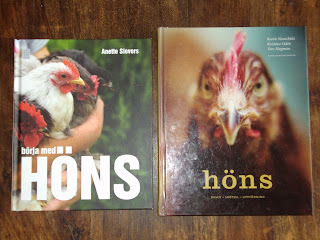 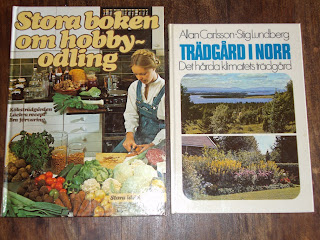 All in all this should result in healthier food, cheaper and with a far less ecological footprint than that stuff they sell at the supermarkets. Since we will not be using any chemicals for cropprotection or furtilisation the chemicals in the foodissue will be absent too. What we can not grow ourselves, we'll buy locally. There's a potatoeframer here that has delicious potatoes, ecologically grown, for instance. And last year our community has been facilitated with a local slaughterhouse, where you can buy locally grown and slaughtered pigs, cows and even game. As for the storage we'll be using grandma's way; storing the fruit and vegetables in glass jars, containing nothing but (ground)water and a dash of salt, bury them in sandboxes or in crates in a cool and dark place, which we happen to have now!
Other (wild) futureplans include beekeeping (not so wild) and having a horse or two (a bit wilder). Maybe even a cow (quit wild)! ;)

Guess the trying woodsman is becoming more and more of a trying homesteader.... but personally I believe this is just a natural development, given the change in lifestyle so far and the interest in and love for the outdoors, nature, lowimpact and simplicity or basicness of life.

In order to avoid losing contact with the natural world (as if that were even possible) I am planning on learning about the natural plantresources this region has to offer.
I found a couple of books, describing the most common trees, shrubs and herbs in our part of the world and their nutricional or even medicinal properties and uses. I already had this great book on mushrooms, so I think this spectrum of foodsupplies is well covered. 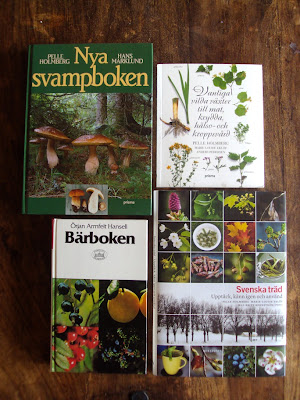 So even if hunting and killing should prove to be not for me, we'll still have enough to trade or give away.
Upplagd av Ron kl. 12:09 PM

Email ThisBlogThis!Share to TwitterShare to FacebookShare to Pinterest
Etiketter: Food for thought