As I mentioned a while ago, I found a surplus Swedish armyaxe in a local secondhandshop and what can I say.... it followed me home. Allthough I like my gear to be in subdued colours, like greens and browns, I did not like the way this axe looked. It was coated in a dark greenpaint, but the original greyish greenpaint showed through on the head. So I decided to de-militarise it, meaning clean it up and remove the paint. The leather cap was dirty, had mold on it and the straps felt quit dry.﻿ 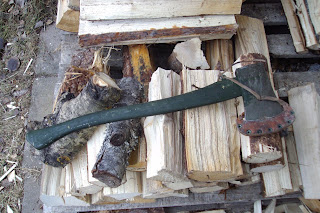 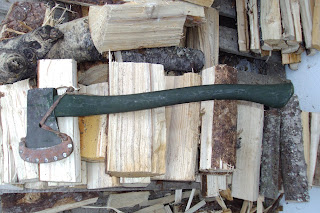 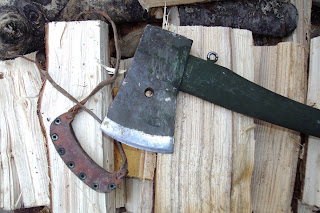 So I sat to work. First I took out that odd ring at the back, glued a wooden peg into the remaining hole and sanded that smooth later. I sanded the head and handle bare, which was quite a tough job by hand. First with an 80 grid paper to get through the layers of paint and than finish it smooth with a 120 grid. In order to make sure the head remeined firmly in its place, I let it soak in an oilbath for 24 hours. The leatherpiece was washed in lukewarm water with a mild detergent, removing grim and mold. After it had dried it was treated with leathergrease.
﻿ 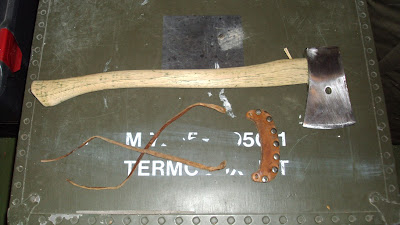 I like to adorn my things with a personal something, usually meaning a moose('s head). I used a small powertool to grind one into the back of the blade, befor giving it all a vinegarbath in order to create a patina. I only succeede partially in my goal, because the patine came out much less dark than I had planned and the moose's head is not as visible as I'd hoped. Bu´t under certain angles it really stands out with an almost ancient feel about it.... I love it! 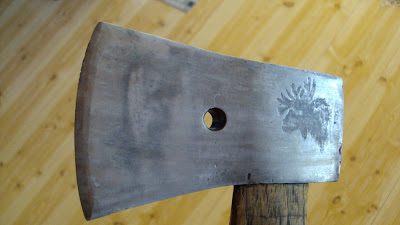 The handle is bare wood, but with dark green in its grain. I kind off like that too. Shows the grain rerally well and gives a hint of the axe's heritage and history..... That sounds a lot better than :"I couldn't get it off and out by hand."
The dark disclouoring under the head is moisture from the vinegarbath. I hope that'll dry out colourless, though. 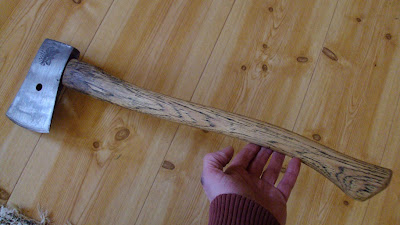 All in all I like the civilianversion a lot better! 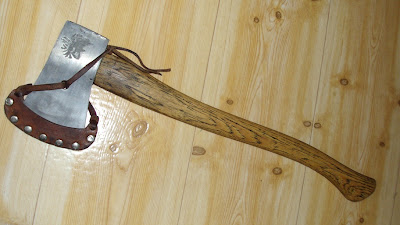 Email ThisBlogThis!Share to TwitterShare to FacebookShare to Pinterest
Etiketter: DIY or Do It Yourself, Gear and stuff