I have to admit I was surprised last sunday, when I heared my son shout that we had 2 deer in our yard! I would have never expected to see them right here, between the homes and barns of the place we live now, but they did come out! I guess the large amount of snow is driving them out of the woods and into the human world in order to search for food. We could just see them from on of our kitchenwindows as they headed into the wooded area of our garden. We watched them slowly move on and I was as happy as a child on christmasmorning to see them here. Their appearance means something special to me and actually to all of us. Don't exactly know why, it just does. 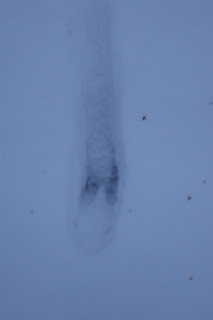 After the deer had moved on I went out to look for their tracks and I found them almost immediately, yet instead of 2 there were 3 tracks. one of them had appearantly rounded the large bolders in the yard and kept out of sight. I followed their tracks around a little and found a place, right behind said bolders, where they had scraped away the snow and had been feeding. All of this within 15 meters from the house! They must be desperate. Than I remembered the small trail I found in the grass, when we moved in here. Could it be that they came here frequently? New tracks in the snow should give me the answer.... 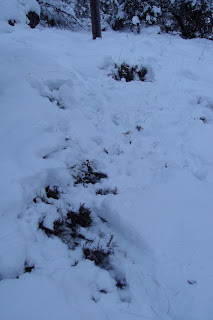 And they sure did. Right the next day I found very fresh tracks, when I came home from work. These tracks were even closer; within 3 meters from our frontdoor! And they had again been feeding, this time between some wild rosebushes, right next to the path next to the house.
I decided we were going to help them and give them some additional food, something the appearantly needed and were desperate for. I grabbed a large flowerpot with matching waterplate, filled the latter with deerfood we in the meantime had gotten from my mother in law and placed the plate on top of the pot, so it was well above the snowlevel. I was just hoping they would indeed show up again and yes.... a little later that morning we spotted some movement just on the other side of our gardenborder. There they were, first 2 of them, almost up to their bellies in the snow; 2 adults, a little later followed by a younger one. A yearling, maybe? 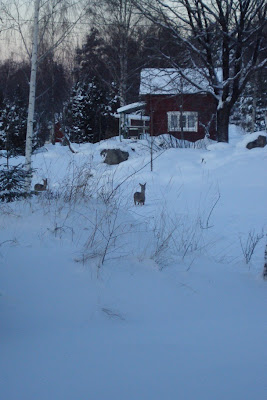 However they were to weary, to apprehensive to go anywhere near the pot. Except for the young one, it kept paceing back and fro, constantly sniffing and checking. Eventually they all got scared away by our neighbour, slamming hid cardoor and starting the engine..... damn. 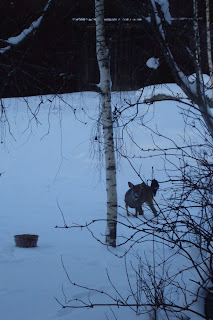 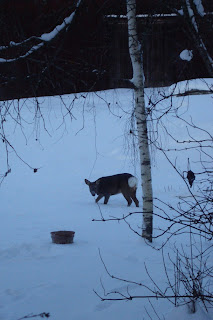 Later we talked to my parents in law on the phone and the issue came up. They told us they too had deer in the wooded area behind their house. We knew there was a group of 3 out there, but somehow that group had grown to 6! And they were all happily feeding from a couple of feeders my father in law had made. If we would like to have one as well?
Sure we did and we hung up that one yesterdaymorning. I guess we spooked "our" deer, because we did not see them, yet when I went out today I saw numerous tracks around it and some food had been scattered around. It looked like not only the birds had found it! 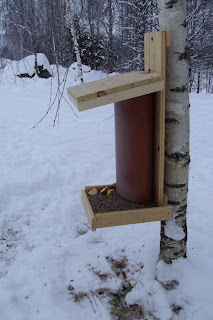 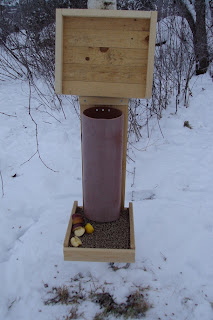 And all around the house are their tracks. They're so close that if I wanted (or knew how to shoot),  I could hunt them with a bow and arrow right from my livingroomsofa or from behind the kitchencounter! Appearantly they are quit comfortable around this place, so I'll try to keep it that way. It does mean i have to alter my plans for my vegetablegarden a bit, though.
Helping deer through the winter has another benefit, besides us being able to see and study them. It keeps them alive, so that large carnivores, like the wolves that have been spotted in the area lately, have something to actually hunt for. This way they might leave lifestock alone a bit more, giving the very strong, and often very egotistical and shortsighted, huntinglobby less reason to shoot them.

Email ThisBlogThis!Share to TwitterShare to FacebookShare to Pinterest
Etiketter: Wildlife