1st of may, the beginning of a new season.

A day with great weather, about 17C and sunny. Actually I had planned to go out early into the woods to just walk about and practice, but since everyone in and around the house were about to get busy doing chores, I felt it necessary to do something too. So the morning passed in a productive way, but in the afternoon I sat down, started a fire and took out my woodcarvingknives. While the fire was going and the coffee was brewing I worked on my knife- and axeprojects.
The vinegarbath cleared off all the rust and gave the blades a very nice darkgrey patina. The knifeblade turned out to be a Moraknife, but I think the axehead is "homemade". You can clearly see the differences in metalcolour between the ring and the blade! 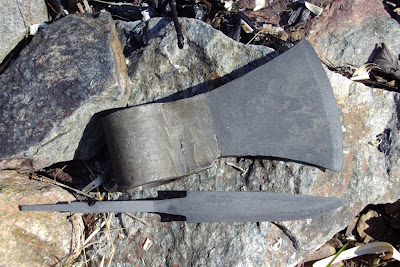 I really need to work more on my woodcarvingskills. Properly sharpening of those blades naturaly comes with that and on BCUSA I found some tips on how to alter Mora's crooked knife, in order to make it perform better. But a tool is only as good as the hand who handles it..... 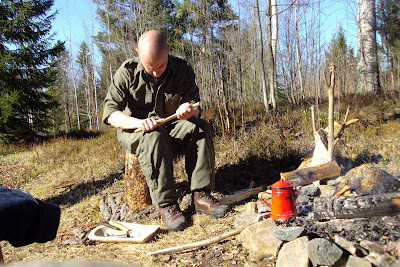 While carving I regularly stopped to get some coffee and while sipping that I had a look at bees buzzing by, several species of butterflies came flapping along, there were numerous birds all around me, a pair of birds of prey gently floating over the woods and later, after the rest of the family had joined me, we even heard the deer call in the woods!
A question I often come across early in spring when the subject of tapping birches is brought up, is what actually is in the sap that makes it so desirable. Well, here's the answer in one picture; sugars and starches. This is the trunk of one of the large birches we had to cut down a few weeks ago and it has been, and still is, bleeding sap. This offcourse dries in, leaving a thick, fluffy, mooshy substance behind. It has a close resemblence of whipped cream, gone bad.﻿ 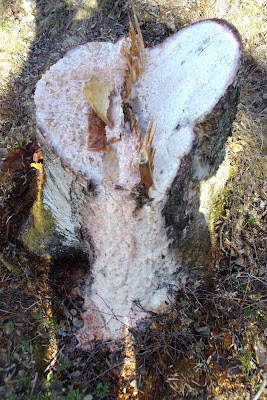 We caught our black cat chasing something through the low berrybushes. I saved this little fella from ending up as a cattoy. Gave us all a good opportunity to study it up close. Little, because some part of him were missing, but the wound was dry and capped off. Beautifull head and skinpattern....
If I am not mistaken this was (at least the front part of a) Kopparödla or Anguis fragilis. 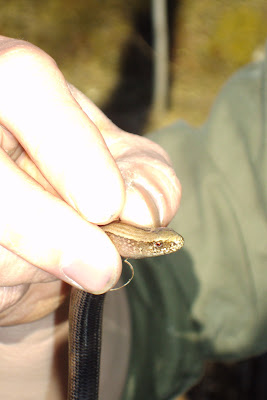 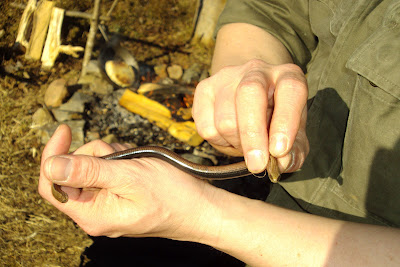 Here's a wikipedia-image of a complete one; And what does a good woodsdad do? He cookes a good woodsmeal for the woodsfamily! In this case I backed an bread with nuts and raisins in one cast ironskillet, grilled some meat in another, wrapped potatoes in aluminiunfoil, tossed those into the coals, grilled some hamburgers in the meatskillet afterwards and than served the whole lot with a fresh salad! 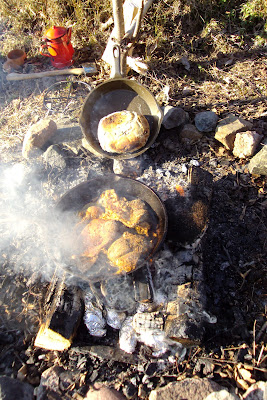 An outdoorsgreeting from Sweden!!!
Wishing all you outdoorsmen- and women a great and troublefree summerseason! 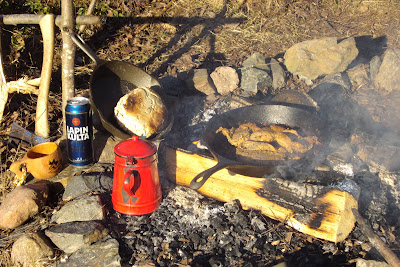 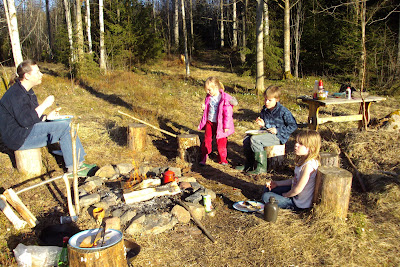 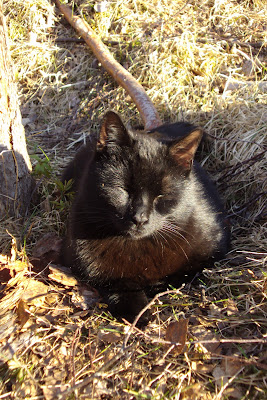 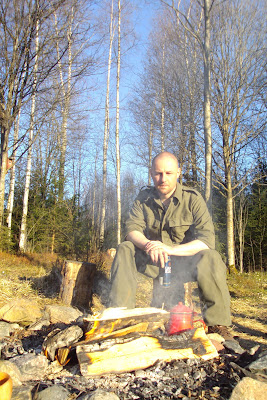 One skill I have become quit good at; sitting at the fire, with a beer or coffee, and just relax. A great way to think about things or to just sit and stare at the flames....
Believe it or not, but that is a skill I actually had to learn!!
Upplagd av Ron kl. 4:06 PM