A couple of days working on skills and projects

The easter days have past, the wife had a few days off, so I had some time to spare. I used that time to some extend to work of some skills and projects. I have several of those lined up.....
One of the things I learned (had first "classes" in, is a better description) in the past couple of days, was felling large trees and working with a chainsaw. The storms I mentioned a couple of times had damaged some trees around the house and in the backyard of in one of our neighbours' backyard and these were becoming increasingly dangerous. Two large birches had crackes running up the stems up to 4 meters, both from the ground up, but also a couple of meters above the ground. One had some serious widowmakers in the top, too! A large, 12 meter high pine had broken in two and a old rowan was blown over. And than there was a thicket of willow that had become quite large too and was bending over in gusts of wind in a way that we were concerned they might give way too, soon.
I didn't cut class, paid attention and am sitting here in one piece to tell about it. It was quite an experience and there were some moments where we were very much on our toes, when the wind picked up, while we were cutting..... The pine was cut by someone else, since it was hung up in other trees and was standing in the middle of other trees, making moving about difficult and tricky.
This experience provided me with plenty of wood to choose from for my next projects, though!

I have no working space of my own. No mancave where I hang my tools, stash my woodsupply and can retreat in, so I have to use what I have.... the porch! The large cuttingblock in the middle gives you an idea of the size of the birches. Unfortunately much of their tops were useless; damaged and rotten.﻿ 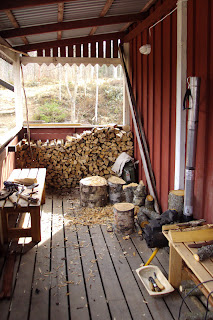 The rowan gave some nice pieces too. I used 2 of them to cut a couple of mallots, so I can use my woodchisels, too..... once I properly learned to sharpen them... 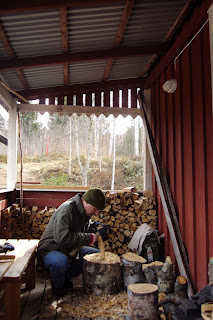 This is a old wooden bowl. It was given to me by an older lady, whose garden I kept, because she couldn't anymore. She passed away about a month ago and I decided to honour her by recarving the bowl. As said, it was old. A couple of decades at least. It had seen better days and one of the last jobs this bowl did, was holding used paintsbrushes.... Now they hold my Mora Frosts.
The wood was bonedry, but hadn't split. During the recarving I also learned the basics of sharpening these tools, but still the going/cutting was tough. 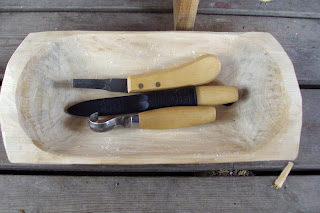 ﻿﻿﻿﻿
﻿ The outer- and innerbark of the rowan came off easily, but the underlaying wood was tough and hard, even undried!!! That should make some piece of equipment when dry.
﻿ I also laid my hand on gathering birchbark. It was both easier than expected and yet not so easy. The bark came off quite easily, but the knots proved difficult. I pounded them slightly with the smaller mallot, but still I had to use the knife to cut under them, in order to prevent the bark from tearing or getting punctured. I did not succeed fully..... 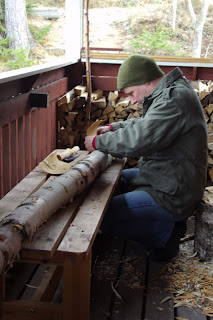 Yet one harvest from one of the lerger branches yielded 4 niece sheets of bark! On to the projects of making birchbarkcontainers! 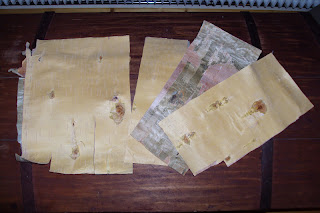 Another thing I made yesterday was a hanging piece of stropping leather. My father in law found 4 old, dry and dusty strips of leather, which at one time were part of some chairs. This was a heavy quality of leather, so there was no way i would let these end up in the garbagecan! One, the dirtyest, I used and the others will come in handy at a later date, I'm sure.
I carved a couple of rowanbranches, so I could suspend this strop from a hook, while working with it. I did use it already, lying down, while working on the mallots. And it worked brilliantly! 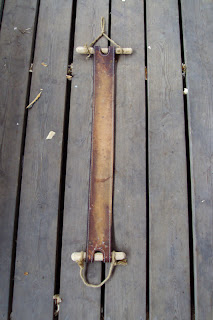 Another piece of the birch. While cutting it into sections my eyes fell on this one and I was struck by the image in it! I just had to have it, even if I can only make breakfastplates from it! Can you see what I saw??
Many care woodspirits.... I got my woodspirit/animalspirit presented to me. It is a ram. You can clearly see the snout, nose, face, horns and wool! 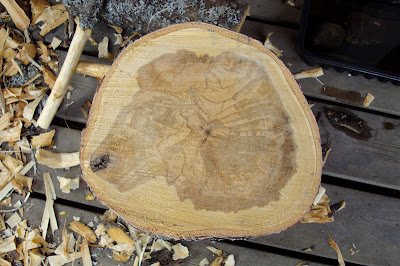 More material waiting to be used; The shoulderblade will become a neckpendant for my oldest daughter. After all she found it. The ribs will become needles, once I found a suitable piece of sandstone or I can make a sandingblock from something else. The rest?? Don't know.... yet. 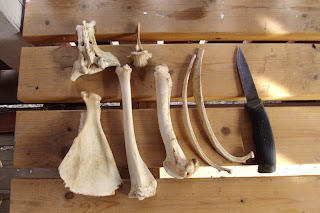 And even more stuff..... Plenty of pinepitch for the barkcontainers and the cowhorn will become a tinder/firehorn, made to hold tinder, flint and steel. 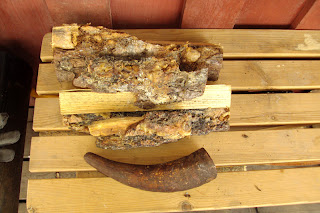 Some projects have already been started. It appearantly is mandatory that every "serious outdoor"-man should make/rework a knife and axe.... Well, these will be mine.
I found this knife around the house, tucked away between grass and wood. I can not make out the maker, but the plastic grip felt good. I could quit easily sharpen the abused and neglected blade too. So off with the plastic and bring in the wood!! Initially I had this piece of wood in mind, but trying to split it into manageable piece proved not as easy as I thought. The wood is all twisted..... which seems only suitable... 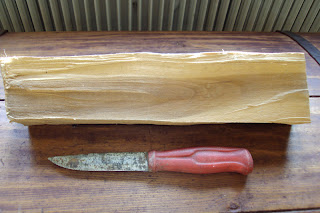 After I cut off the plastic grip, I drew a basic plan of what I had in mind. I like the natural flow of the outer lines, but it remains to be seen it they are practical. The sheath will not be a sheat, but a wooden scabbard! I want to make the whole thing from 1 piece of wood, so knife, handle and scabbard will be as one from the outside. Right now I have also pieces of rowan and Syringa drying, should the first piece of wood prove useless.
And than there's the axehead. I actually found it under the porch. I guess it has been sitting there since a long time. We have been walking above it for the last six years! For the handle I want to use rowan too. I was told that that wood makes great wood for handles and since we cut down one...... But in the whole tree I found just this one piece that suited me! Long enough, straight, no knots or other branches, not rotten and not cracked or damaged from the storm and subsequent fall! It actually is one of the lower branches of the tree. 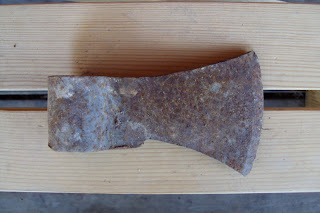 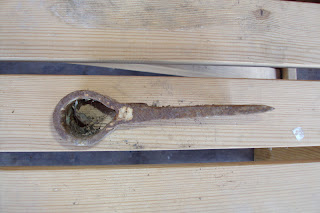 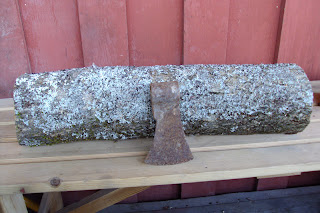 For now both blades are bathing in vinegar..... on the porch..... The stone was needed to raise the fluidlevel in order to submerge the axehead..... I ran out of vinegar..... 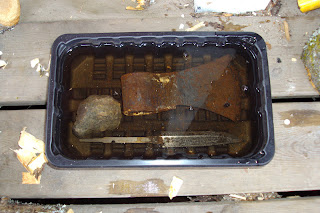 Email ThisBlogThis!Share to TwitterShare to FacebookShare to Pinterest
Etiketter: Bushcraft, Gear and stuff