Today my daughter and I wanted to go out, into the woods. Initially I had planned to go alone, but since she loves it out there, too and it had been a while since we spent some time together out there, I took her with me.
It was a beautiful sunny day, not too warm and not too cold. With around 10 degrees, just right to be active. We both brought our binoculairs, too, because that was our main goal; spotting wildlife.... Allthough, with a 9-year old present I did not set my hopes too high. Shortly after we left, we deviated from our originally planned route and headed up the hill, heading for the place where loggers had been busy last week. Afterwards I wish we hadn't.... These guys had wreaked havoc up there! It looked as if a tankbattle had been raging there! Tracksprints, churned up soil, broken and ground up trees everywhere and in many places the cut off branches lay feet deep. The paths/trails had been demolished, too and the meltwater had washed a lot of mud and dirt off the hills onto the them, making them slippery, soggy and hard to move over.

Up on the hill all the trees that had been blown over during the Christmasstorms had been cleared and the forrest had been thinned out, but this has been done with so much brute force that I seriously doubt the woods will benefit from that. We did find my previous spot, where I had built and left my shelter, but that did not fare any better than the surrounding area. Pretty much all the undergrowth had gone and up there, there was a stiff and bonechilling breeze. We had to keep moving, but were really not planning on staying here! We moved down the trail again and turned in another direction; one where the damage did not look as bad.
After a little while we had to stop, because we had worked up an appetite and we halted in a more or less acceptable piece of the woods. There we quickly built a windshelter, because we found out we had been a bit optimistic in our choice of clothes, allthough we really had no wind when we left and up here were facing up to 10 m/s winds and cold ones, too! I wanted to go "all green" today, because wool seemed to be just too warm, like last time, when the temperatures were even lower. Going green means wearing my old army fatigues...... 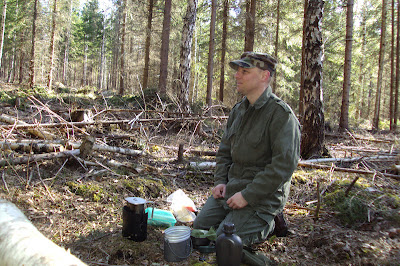 My daughter clearly hasn't got these and she was wearing a thicker, polyester insulated jacket. We hadn't brought gloves or anything, but it turned out we should have! She was happy her Swedish army cap had earflaps!
The "shelter", basically a wall made out of small trees with interwoven spruceboughs, kept us out of the wind quite nicely and was erected/constructed within 30 minutes. My daughter even made a bench and table for herself, complete with spruceboughpadding! 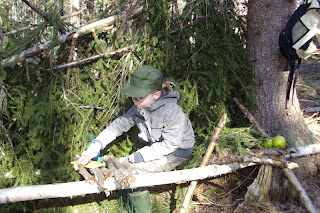 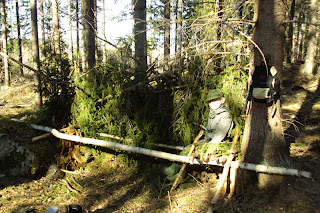 Here we had lunch and listened to the birds, trying to distinguish the different calls and determining where they came from. We noticed that from time to time, there was a complete silence that lasted for several minutes. Than one bird would call again, followed by others. After lunch, my daughter asked if we could go home. This clearly was a sign she was cold, because she never would do so, otherwise! 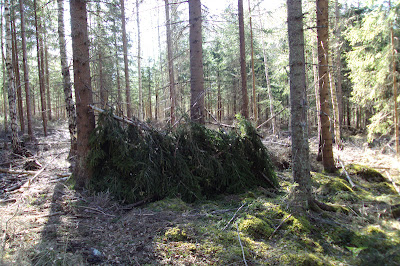 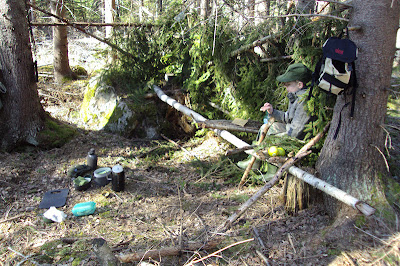 The wildlife we saw today was limited to a large bird of prey, soaring through the sky on our way in and large brown bird we scared out of it's hiding. It shot away like rocketpropelled, making it hard to see what it was. It had the size of a duck, short body and tail, but wide wings, compared to its body. I also managed to catch my first deerfly in my neck. Time to take my "Nordic Summer" with me, again. But we did see quite a number of animalsigns, but the most noticable were many woodpeckerholes and some moosetracks and droppings, showing this animal had travelled down the loggerstrail after they ransacked the place. 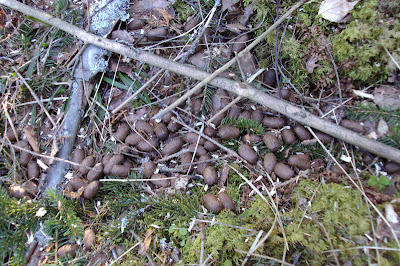 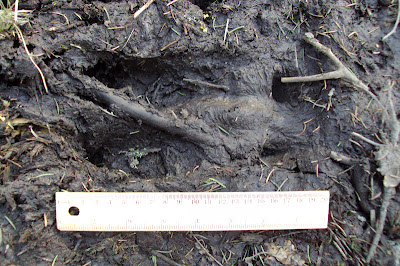 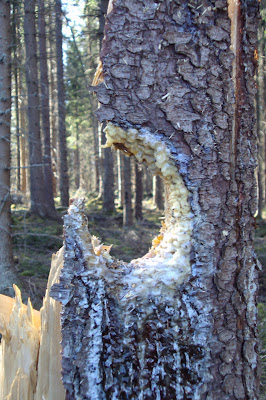 We also found our very first socalled blåsippe, blue forrest anemone, of this season. Still closed, but you could see the blue shining through... 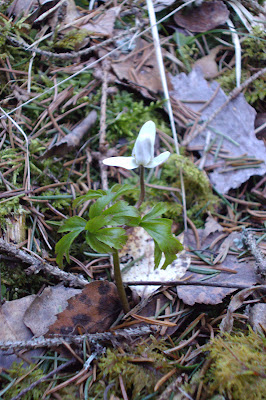 Some other things we found were a small wooden disk, cut from one of the trees and my daughter brought it with her, so she can do some woodburning in it, once it's dried out. A little later I found a disk, too. "Slightly" bigger than hers and I will transform it into a small table or stool.
All in all it was a lovely day out, a bit short in actual time, but not in qualitytime!


Looking back at the gear I used today, there were a number of things I noticed.
One was, again, the fast way we both lost warmth in the wind. Out of the wind we were just fine and comfortable, but in it was a different thing. As said, my daughter wore a thicker jacket and cap with earflaps. I wore a cotton t-shirt, a long sleeved shirt over that, topped with my old and trusted Dutch NATO-jacket. The winds did not get through that, but still sapped away our warmth. But I do know that if I had worn my wool trousers, sweater or jacket I would have been too warm, at least while moving. I guess I should have brought a spare sweater.
I also used my Finnish gasmaskbag again, but with my Swedish messkit inside, it was not comfortable to wear. The messkit simply is too bulky for this bag. I have to rethink the packing of this bag if it has to serve as a daypack, but I am afraid it simply is too small to be taken solo. It also seriously limited the access to my lower jacketpockets, because of the waistebelt, which ran directly over the flaps of the pockets.
I did not bring an axe, shelterhalf, poncho or any other larger items, other than the Finnbag and my breadbag, and if I had wanted to bring any of those, or indeed any other larger item, I would still have needed a backpack. Maybe if I exchanged the Swedish messkit for a Dutch one, I might save some volume, but that still would necessitate a way to carry at least one canteen. Without at least one filled up I will not leave home. And I even haven't mentioned food. I do not want to settle for a day of living on makebelieffood, such as noodles, ramen, powdered eggs or any similar "food", other than powdered soup or coffee, to quickly warm me up in case of "emergency". This means my food will be bulkier and heavier, too.
Maybe I'll turn my Finnbag into a foodbag/fieldkitchen. I think it will do just fine in that role.......
Upplagd av Ron kl. 8:06 PM

Email ThisBlogThis!Share to TwitterShare to FacebookShare to Pinterest
Etiketter: Bushcraft, Out and about